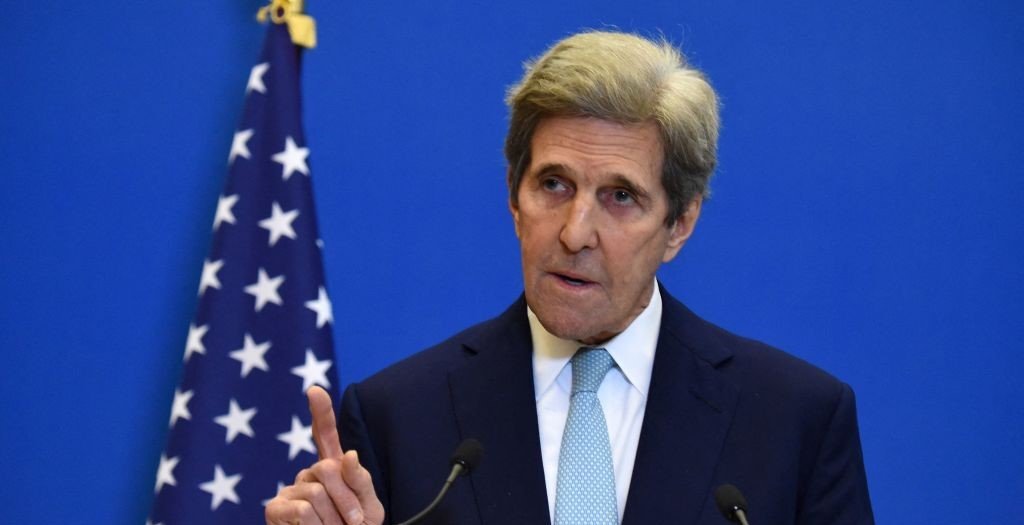 U.S. Special Presidential Envoy for Climate John Kerry gestures as he addresses a press conference after a meeting with France’s Economy and Finance Minister at The Ministry of Economy in Paris on March 10, 2021. Kerry plans to visit India in early April ahead of the World Leaders Summit on Climate. (Eric Piermont/AFP via Getty Images)

NEW YORK – U.S. President Joe Biden has invited 40 heads of state, including Indian Prime Minister Narendra Modi, to join him for the World Leaders Summit on Climate to be hosted by his administration on April 22-23.

The other leaders, including Presidents Xi Jinping of China and Vladimir Putin of Russia, and Prime Ministers Sheikh Hasina of Bangladesh and Lotay Tshering of Bhutan, have also been invited to the virtual meeting to highlight the urgency of action to combat climate change, the White House said March 26.

“The Leaders Summit on Climate will underscore the urgency, and the economic benefits, of stronger climate action. It will be a key milestone on the road to the UN Climate Change Conference (COP26) this November in Glasgow,” the White House said.

The virtual summit will be live-streamed for people everywhere to watch the proceedings.

Biden has made fighting climate change a pillar of both his foreign and domestic policies and one of his first actions on taking office in January was to have the U.S. rejoin the Paris Climate Change Agreement.

The summit is meant to position Biden, and the U.S., as the global leader in meeting the climate change challenge and boost his stature.

“By the time of the summit, the U.S. will announce an ambitious 2030 emissions target as its new Nationally Determined Contribution under the Paris Agreement for limiting the damage from climate change, the White House said.

Biden has asked all U.S. government agencies to come up with ways to cut greenhouse emissions and harness green energy.

He appointed former Secretary of State John Kerry to be his international emissary for climate change, reflecting the high priority it has on his agenda.

He is reaching out to the leaders of China and Russia, whom he has harshly criticized over their human rights record and their international rivalry with the U.S., to work together on the climate agenda despite their differences.

Biden wants countries around the world to take steps to limit emissions to a level that would limit planetary warming to 1.5 degrees Celsius “in order to stave off the worst impacts of climate change,” the White House said.

“The president urged leaders to use the summit as an opportunity to outline how their countries also will contribute to stronger climate ambition.”

India will be under U.S. pressure to cut its greenhouse gas emissions by being shown as the world’s third-highest emitter of greenhouse gases after Beijing and Washington.

However, that picture is misleading as on a per capita basis the U.S. emissions were nearly nine times that of India.

An Indian emitted only 1.96 tons of greenhouse gases in a year, while an American was responsible for 16.56 tons.

For all the posturing and preaching, Biden or the climate change activists in the U.S. are not going to bring down the U.S. per capita emissions anywhere near the Indian level while demanding that India cut down its emissions overall.

India is already promoting green energy to eventually eliminate fossil fuel-generated electricity. It is reportedly working on a goal of achieving a net-zero emissions by 2050.

The Climate Summit will be Modi’s second multilateral virtual meeting with Biden. Earlier this month, Biden and Modi were joined by Prime Minister Yoshihide Sugo of Japan and Scott Morrison of Australia at a summit of the Quad.

India-West reports: Ahead of the summit, Kerry plans to visit India in early April. Kerry’s visit to India is part of the U.S.’s planning for Glasgow — he had said as much in February, according to reports.

Other U.S. officials, including Secretary of State Antony Blinken, have talked about working closely with India on climate change. In July last year Blinken said that common global challenges cannot be solved “without India as part of the deal,” reports noted.

Earlier in March, the Quad leaders summit — also hosted by Biden — had set up a climate working group, one of whose objectives is to strengthen the implementation of the Paris Agreement, including keeping a Paris-mandated temperature limit achievable.