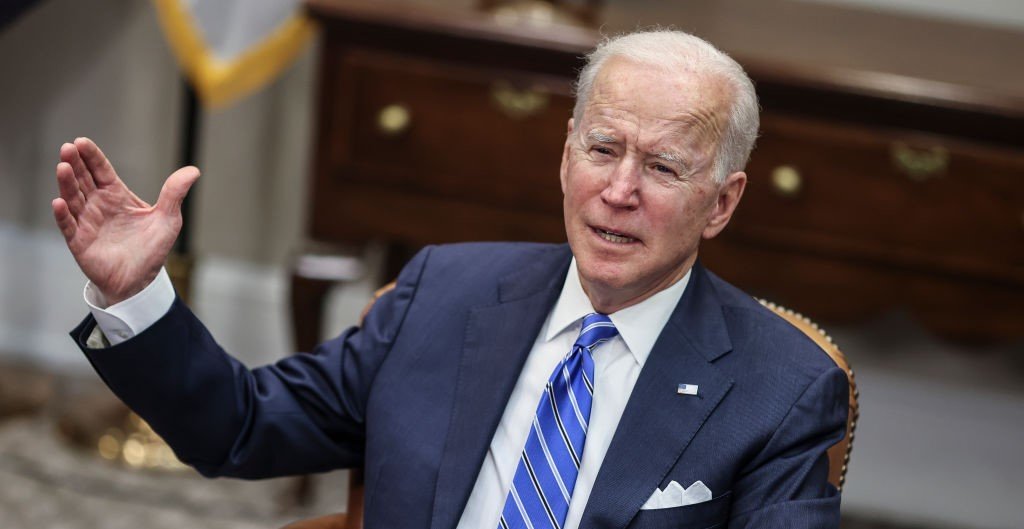 President Joe Biden speaks during a virtual call to congratulate the NASA JPL Perseverance team on the successful Mars Landing in the Roosevelt Room of the White House on March 4, 2021 in Washington, D.C. (Oliver Contreras-Pool/Getty Images)

NEW YORK – Issuing a high alert about the growing dangers to the international system from China, President Joe Biden has called for building alliances with like-minded countries and said the U.S. will deepen its ties with India.

The Interim National Security Guidance he released March 3, singled out China as the only “competitor” capable of mounting a sustained challenge with its multifarious capabilities to the international order.

He said in the document that the U.S. will support China’s neighbors and declared, “We will deepen our partnership with India.”

Introducing the document, he said it would “convey my vision for how America will engage with the world” and guide his administration while Washington begins work on a new national security strategy.

He sketched a vision of a cooperative of democracies to face China, which “has rapidly become more assertive.”

He called Beijing “the only competitor potentially capable of combining its economic, diplomatic, military, and technological power to mount a sustained challenge to a stable and open international system.”

To counter this as well as the challenge from Russia, the U.S. will have to “promote a favorable distribution of power to deter and prevent adversaries from directly threatening the United States and our allies, inhibiting access to the global commons, or dominating key regions,” he said.

“We can do none of this work alone. For that reason, we will reinvigorate and modernize our alliances and partnerships around the world,” he said.

“Our democratic alliances enable us to present a common front, produce a unified vision, and pool our strength to promote high standards, establish effective international rules, and hold countries like China to account,” he said.

Envisaging the framework for the alliance of democracies to face the China challenge, he said, “Beyond our core alliances, we will also double down on building partnerships throughout the world, because our strength is multiplied when we combine efforts to address common challenges, share costs, and widen the circle of cooperation.”

Biden drew attention to the risk from China’s “One Belt, One Road” initiative that seeks to bring countries around the world, especially developing nations, under its economic dominance.

To counter this Chinese program, he said, “We will support China’s neighbors and commercial partners in defending their rights to make independent political choices free of coercion or undue foreign influence. We will promote locally-led development to combat the manipulation of local priorities.”

China has set debt traps by making loans to countries for infrastructure projects that they cannot pay back in the long term and then has sought to take control of them.

At its core, though, the guidance is his own version of a kinder, gentler America First that seeks to strengthen the U.S. as the unparalleled world leader.

“America is back. Diplomacy is back. Alliances are back. But we are not looking back,” he said.

“The United States must lead by the power of our example, and that will require hard work at home — to fortify the founding pillars of our democracy, to truly address systemic racism, and to live up to our promise as a nation of immigrants,” he said.

“Our success will be a beacon to other democracies, whose freedom is intertwined with our own security, prosperity, and way of life.”

In his address on “Foreign Policy for the American People,” he said, “Whether we like it or not, the world does not organize itself. When the U.S. pulls back, one of two things is likely to happen: either another country tries to take our place, but not in a way that advances our interests and values; or, maybe just as bad, no one steps up, and then we get chaos and all the dangers it creates. Either way, that’s not good for America.”

On the economic front, Blinken echoed one of former President Donald Trump’s constant refrains: “We will fight for every American job and for the rights, protections, and interests of all American workers.”

He also portrayed China as the main challenge to the U.S. and world and stressed building alliances to meet it.

In related news, on March 4, the U.S. reiterated its condemnation of terrorists infiltrating the Line of Control (LoC) in Jammu and Kashmir, adding that it was “very closely” following the developments there.

State Department spokesman Ned Price said March 4: “We condemn terrorists who seek to infiltrate across the Line of Control.”

Asked by a reporter at his daily briefing what Secretary of State Antony Blinken was going to do to ensure the agreement by the two countries to maintain the ceasefire along the LoC, Price said: “We have continued to follow very closely developments in Jammu and Kashmir. Our policy towards the region has not changed.

“We call on all parties to reduce tensions along the Line of Control by returning to the 2003 ceasefire commitments.”

“When it comes to how we will support that, we continue to support direct dialogue between India and Pakistan on Kashmir and other areas of concern.”

Asked if the U.S. was in touch with non-officials in Kashmir and what it could do to “elevate their voices,” the spokesman said: “I don’t have anything for you on that.”

In a joint statement issued by the directors-general of military operations of the two countries’ armies, they reaffirmed their commitment to the “strict observance” of the ceasefire.

President Joe Biden’s spokesperson Jen Psaki had immediately welcomed the agreement calling it “a positive step towards peace and stability in South Asia.”