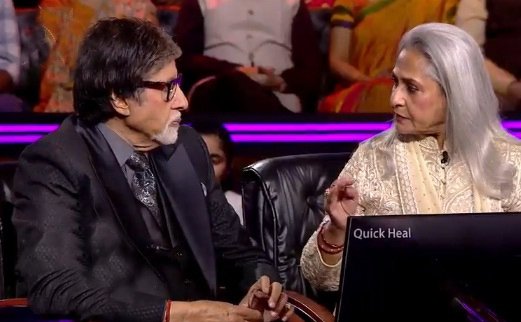 MUMBAI, (IANS) – On the 80th birthday of megastar Amitabh Bachchan his family appeared on the sets of ‘Kaun Banega Crorepati 14.’ It left Big B teary-eyed.

His wife Jaya Bachchan was seen complaining to her husband about not sending flowers and letters to her like he sends to others as a token of appreciation and his son Abhishek Bachchan reminisced how the legendary actor visited Kamalistan Studios during the screen test of his debut film to help him for the rehearsals of lines from the movie.

Jaya questioned Big B: “I have not seen but heard that when you are impressed with someone’s work or nature, you send that person either flowers or letters, but you never sent it to me. Did you ever?”

Abhishek also nodded his head and Big B replied: “This program is going public, and it is not a good thing.”

Jaya also made Big B speechless by asking an interesting question that what he would do if he were stuck with her on an island and the  star failed to answer it and asked for options. To which Jaya said that there are no options for this question.

Bachchan was also left teary-eyed after Jaya’s revelation, and he was also touched when Abhishek Bachchan talked about the best script of his life.

Abhishek made his film debut in 2000 with ‘Refugee’ opposite Kareena Kapoor. During a candid conversation he recalled: “You must be remembering how during the screen test of my first film you came to Kamalistan Studios to help me in the rehearsals of my lines.”

Jaya also shared a few memories from his past and asked him about the time he would like to go back in his life. Her husband got emotional at this point too.

Abhishek also posted on his Instagram handle about the special birthday celebration on the sets of the show. “It took a lot of secrecy, a lot of planning, a lot of hard work and a lot of rehearsals to get it right. But then again, he deserves no less! It was very emotional to be able to surprise dad and celebrate his 80th Birthday at the place he loves the most, his workplace,” he said.