HomeEntertainmentCinemaBig B 80:  The Face Off With Accomplished Villains

Big B 80:  The Face Off With Accomplished Villains 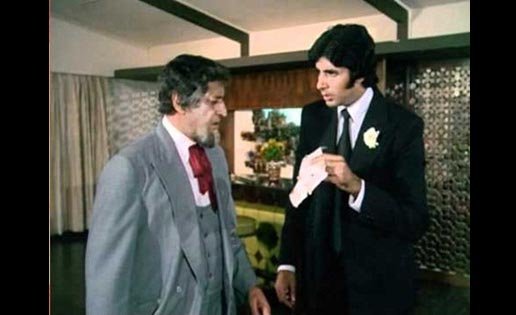 Big B 80:  The Face Off With Accomplished Villains

Over his vibrantly colorful career, which has crossed the half-century mark and is still going strong, Amitabh Bachchan was paired with several generations of heroines and held his own against many male peers, as well as older and younger generations spanning Dilip Kumar to Shah Rukh Khan. His real test, however, was to maintain the upper hand when facing accomplished character actors, ranging from dastardly villains to steadfast friends, and even long-lost parents.

There are many such actors playing key roles in some of Bachchan’s iconic films – would Inspector Vijay Khanna been successful in tackling crime without the tip-offs from an anonymous drunk or proved his mettle against a lesser villain than Teja? Would “(the fake) Don” have worked without the acumen of DSP D’Silva or found himself in travails without the machinations of Vardhaman? Could Sikandar have found his ‘muqaddar’ without the advice of Dervish Baba?

But while stalwarts like Ajit, Iftekhar (often the police superior and in one case, the mafia one), Madan Puri, Om Prakash, Prem Chopra, Ranjit, Nazir Hussain, Satyen Kappu, Kadar Khan, Om Shivpuri, M.B. Shetty, among others, provide more taste and variety to many of Bachchan’s “masala” films as both allies or antagonists, there were at least two who made him scramble to match them onscreen.

The first was arguably Hindi films’ once foremost villain, whose onscreen relationship with Bachchan was aptly demonstrated in an exchange of exactly half a dozen words in one of their blockbusters. As Bachchan asks him with his habitual insouciance: “Aap kaun hai mai-baap?”, he gets a terse but steely retort: “Tumhara baap”. The film was “Amar Akbar Anthony”.

Pran, who had a key role in getting Bachchan the role that made his name, appeared onscreen with him in 11 films over a decade and a half – and save the last two, all are intrinsic to the Bachchan legend. The first to be cast in “Zanjeer” as the redoubtable Sher Khan, it was the word of Pran, who had gauged Bachchan’s intensity that finally convinced a reluctant Prakash Mehra to cast Bachchan in the role that laid the template of the “angry young man”.

And in the film, right from their first scene, where he is gratuitously insulted by the good inspector and controls himself after a flash of intense anger, he marks his presence, even after becoming an ally. And Pran also creates a record in becoming a supporting actor who gets to sing in a film, whose structure prevents the hero from doing so.

The two came together in two films the next year – in “Kasauti”, where Pran pulls off with elan the role of the hero’s Gorkha friend, and even gets to serenade the lead couple with “Hum bolega to bologe ke bolta hai”, and then, more prominently in “Majboor”, whereas small-time thief Michael D’Souza, his evidence is key in getting Bachchan out of the murder charge he landed himself in when terminally ill. He again gets a foot-tapping song “Daru ki botal mein… Phir na kehna Michael peeke danga karta hai”.

They reunited in “Amar Akbar Anthony”, where Pran was the hapless driver-turned-flamboyant smuggler, who turns out to be the long-lost father of the three heroes, and then in “Don”, where he, as the crippled tightrope artiste, is virtually the second lead, and Salim-Javed wrote as many crisp dialogues for him as Bachchan in both his roles.

Pran plays the long-lost father again of Bachchan (and Rishi Kapoor) – and the final saviour – again in the multi-starrer “Naseeb” (1981), the stern and embittered jailor in “Kaalia”- the scene where a deadpan Bachchan predicts the entire sequence of his actions is priceless, the rich but oblivious father, whose neglect leads to Amitabh becoming the “Sharaabi” (1984), and the mentor in “Shahensah” (1988). The last two appearances were in the sub-par films, the father in “Toofan” and an elderly assistant in “Jadugar”.

The second actor appeared in 14 films with Bachchan – and these also include some of the megastar’s best from “Sholay”to “Mahaan”. But save two, Amjad Khan was usually a villain – in “Parvarish”, “Kasme Vaade”, “Mr Natwarlal”, “Suhaag” ‘Ram Balram”, “Naseeb”, “Satte pe Satta”, “Desh Premee”, and “Nastik”.

However, in three, Amjad Khan was a vital foil to Bachchan – as the laughing gangster Dilawar in “Muqaddar ka Sikandar”, the childhood friend-turned-benefactor Bishan in “Yaarana”, and the estranged father in “Laawaris”.

Neither Pran nor Amjad Khan ever sought to upstage Bachchan but in their onscreen encounters, they helped bring out his best as well as provide full entertainment to the audience.