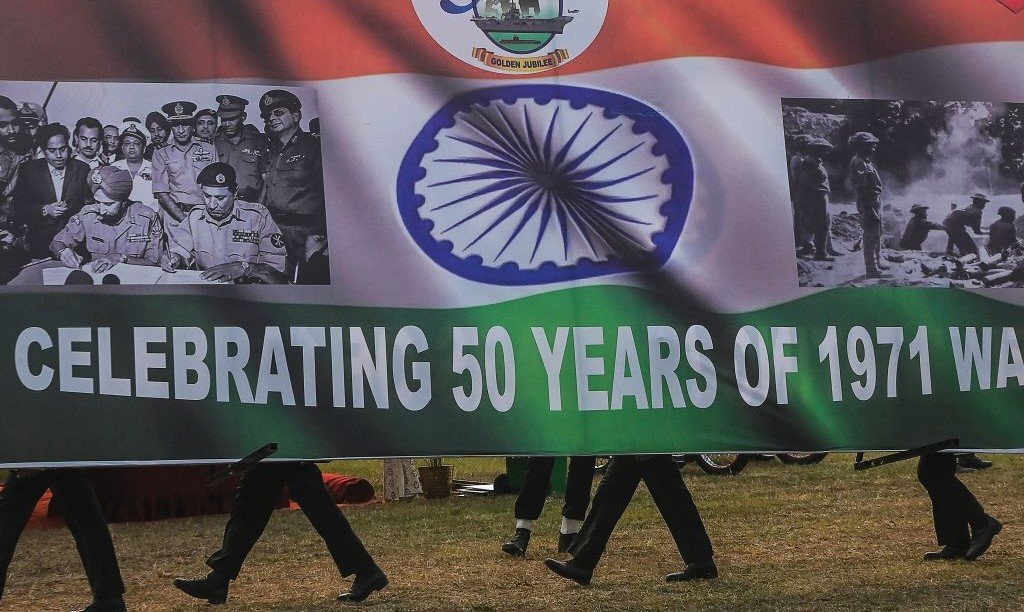 Indian Army personnel perform during a function to commemorate the 50 years of Indo-Pakistani War for the independence of Bangladesh, in Kolkata on March 10, 2021. (Dibyangshu Sarkar/AFP via Getty Images)

DHAKA, Bangladesh — Shafiqul Islam was studying business at Dhaka College in 1971 when a bloody and brutal war for independence ravaged Bangladesh. After undergoing guerrilla training in India, he returned to fight against Pakistani soldiers.

“It was a time of total destruction,” he said. “Our bridges and roads were destroyed, our women were raped, towns were under siege. Thousands of homes and shops were torched.”

Nine months after it began, the war culminated in the country’s independence.

Fifty years on, 67-year-old Islam presides over Arrival Fashion Ltd., a new-generation garment factory spread over 2.5 acres and surrounded by lush paddy fields on the outskirts of the capital, Dhaka. The factory employs nearly 3,000 workers who make jeans for export to Europe and North America.

Islam’s story in many ways mirrors the rise of Bangladesh, home to 160 million people.

On the eve of a half-century of independence this week, Bangladesh has been hailed as a success story for a young nation born out of strife and turbulence. Although it has struggled with famine, poverty, military coups and political violence, it’s also been celebrated for what experts say is remarkable progress in uplifting the lives of its young population.

Millions have risen out of poverty as the country has unexpectedly become one of Asia’s fastest-growing economies thanks to sectors like its garment industry, which clothes millions around the world.

But some fear its success conceals a darker turn, including concerns over its most recent election in 2018 when Prime Minister Sheikh Hasina won a fourth term after clinching 266 out of 300 seats in Parliament. It was a tainted election, as rights groups condemned violence against opponents who alleged manipulated and rigged voting.

“The most worrying thing in Bangladesh is the decimation of the electoral system,” said Ali Riaz, an expert on South Asia who teaches political science at Illinois State University.

But it was another fateful election, led by Hasina’s father, that spurred Bangladesh’s independence, whose origin stretches to 1947 when the Indian subcontinent gained independence from British colonial rule. The land was carved into separate states, with the Muslim-majority regions becoming East Pakistan, now Bangladesh, and West Pakistan, now simply Pakistan. But from the beginning, a strong nationalist movement surged as language became a point of tension; Bengali was widely spoken in the East, while the West’s Urdu-speaking elite rose to power.

Pakistan launched a military operation to stop the move to independence, while India joined on the side of what is now Bangladesh. Pakistani forces surrendered on Dec. 16, 1971.

Bangladesh says 3 million Bengalis were killed. Millions also fled to India, and historians have said hundreds of thousands of Bengali women were raped.

Central to some of the country’s success is its apparel industry, second-largest globally after China, which rakes in more than $35 billion a year from exports. It employs four million people and the triumph has been felt most by women, who form the majority of factory workers. A job at Islam’s factory helps Nasima Akhter and her two siblings earn about $411 a month, which supports her and her family.

When she was a teenager, her parents struggled to provide them with three meals a day. Now 28, Akhter works eight hours a day, sewing hundreds of jeans. “We are doing well now,” she said.

Per capita income has nearly tripled under Hasina, who first came to power in 1996 and was then reelected in 2008. Experts say the country over the years has invested heavily in the lives of women and girls. Currently, 98 percent of children have finished primary school, with more girls in secondary than boys. Life expectancy in Bangladesh is 72 years against Pakistan’s 67 years, and it has also surpassed wealthier India on combating child malnutrition and reproductive health, according to World Bank data.

“It’s been a fascinating journey,” said prominent economist Qazi Kholiquzzaman Ahmad. “It’s a development model for others in the region.”

But Bangladesh is also severely vulnerable to the growing effects of climate change, with a third of its population at risk of displacement from rising sea levels. Experts have long warned that a densely populated delta country like Bangladesh, which struggles with severe and frequent flooding, will be one of the hardest hit by climate change. Strikingly, Bangladesh accounts for a mere 0.35% of global greenhouse gas emissions, according to the IMF.

More immediately, the coronavirus pandemic poses challenges in Bangladesh. COVID-19 cases prompted a nationwide lockdown, and major industries and small businesses ground to a halt. The country has reported over 560,000 confirmed cases and around 8,600 deaths so far. Although experts say the full toll may be underreported, Bangladesh remains less affected than many other countries.

Still, the garment sector has shown signs of recovery and other economic drivers — remittances, agriculture and the service sector — are doing well too, pointed out Ahmad, the economist.

But not everyone is part of the country’s roaring growth, added Riaz, the professor, citing data that job growth remains low despite high GDP numbers.

“Poor people’s share in wealth, their income and opportunities are shrinking. The country is failing to create more jobs for young people,” said Riaz.

Most concerningly, observers say the government’s focus on development may be bulldozing its democratic beginnings. Rights groups and nonprofits have raised an alarm over the ruling Awami League. The U.S.-based Freedom House said the party had “consolidated political power through sustained harassment of the opposition and those perceived to be allied with it,” in its 2020 annual report on democracy.

Experts also highlight a controversial digital security law, which they say can be misused to mute free speech. In February, protesters swarmed an intersection in Dhaka over the death in prison of a commentator who was charged under the law for critical statements about the government’s handling of the pandemic.

Bangladesh is witnessing democratic backsliding over its electoral system, attempts at stifling political opposition, and threats to freedom of expression, Riaz said.

“It was founded with the promise of an inclusive system, but it may be moving away from these foundational promises,” he added.

Meanwhile, Hasina has set ambitious targets, including elevating Bangladesh to a higher middle-income country by 2031 and a developed one by 2041. In February, the United Nations’ Committee for Development Policy recommended that Bangladesh be promoted to a developing country, from least-developed.

Islam, the garment factory director who fought in the war, said he’s done his part — but the country has a lot more to achieve.

“In 1971, we jumped in and never looked back because we knew independence had to come. Otherwise, this nation won’t survive,” he said. “But that wasn’t the end. We still have a way to go but our heart is always with the motherland.”