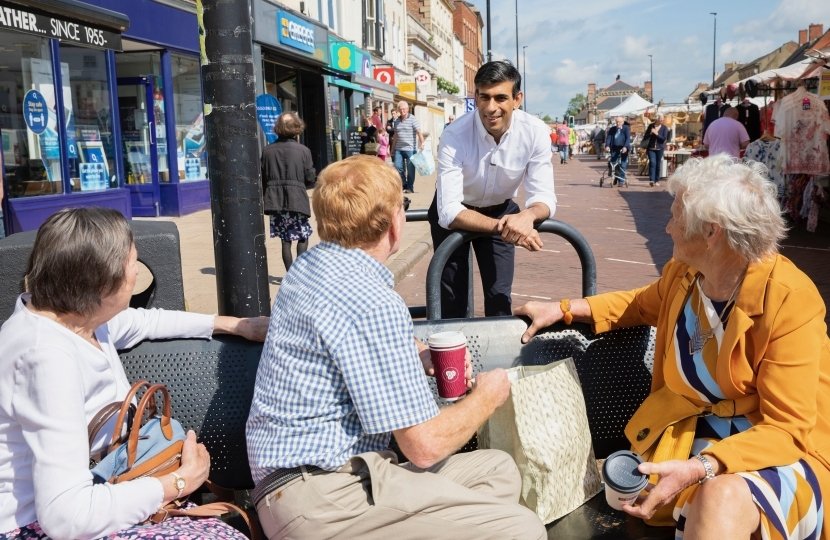 LONDON – It could be called democracy’s diversity, or even colonialism’s counterblast. The race to succeed UK Prime Minister Boris Johnson by becoming the new leader of the Conservative Party, which espoused the Empire, imperialism, and British national identity has been swamped with contenders from former colonies in Asia and Africa. And at the end of the preliminary rounds, the son of immigrants from British East Africa was on top.

Rishi Sunak, UK’s former Chancellor of the Exchequer, or Finance Minister, whose sudden resignation set in motion the circumstances that forced an intransigent Johnson to finally bow out, has emerged as the main contender at the end of two rounds of voting by the 358 Conservative MPs.

Picking up a quarter of the votes in the first round, he became the only one to get over three digits in the second round — and is followed by three women present and former ministers.

Sunak and Braverman’s fellow Indian-origin Priti Patel, the Home Secretary, chose to sit it out.

Javid and Chishti failed to get enough traction to even figure in the race, Zahawi bowed out after the first round, and Braverman after the second, leaving Sunak and Badenoch to contend against Trade Minister Penny Mordaunt, Foreign Secretary Liz Truss, and Tom Tugendhat, the backbench MP, who happens to be half-French.

It’s early days for Sunak, who has emphasized that identity of a person born in the UK but with origins elsewhere matters to him. He must remain in the reckoning till there are only two contenders left in the race, at which point the decision will be left to the rank-and-file Conservative Party members across the cities, shires, hills, and dales across the British Isles.

This, though, will not be entirely unusual — for such staunch British PMs as Winston Churchill and Harold Macmillan happened to be half-American (on their mothers’ side) and Johnson was born in the US, becoming the first non-UK-born Prime Minister since Andrew Bonar Law nearly a century ago (Bonar Law, however, was born in Canada, which was a part of the Empire.)

Born in Southhampton on May 12, 1980, Sunak is the son of (the then British) Kenya-born Yashvir Sunak and his wife, Tanganyika-born Usha, who grandparents were born in the Punjab Province of British India, and migrated to East Africa, and from there to the UK in the 1960s.

“My parents emigrated here, so you’ve got this generation of people who are born here, their parents were not born here, and they’ve come to this country to make a life,” he said in an interview with the BBC in 2019.

“In terms of cultural upbringing, I’d be at the temple at the weekend — I’m a Hindu — but I’d also be at (Southampton Football Club) the Saints game as well on a Saturday — you do everything, you do both,” he said, also revealing that he was fortunate not to have endured a lot of racism growing up, save for one incident, when he was with his younger siblings.

With his father a general practitioner, and his mother, a pharmacist, he had an easy childhood. He studied at a prep school in Hampshire, and then he was at the prestigious Winchester College, where he was head boy and editor of the school paper; during vacations, he worked at local curry restaurant.

Oxford was the next stop and he graduated in 2001. The same year, he was interviewed along with his parents for the BBC documentary “Middle Classes: Their Rise and Sprawl”. He was an analyst at investment bank Goldman Sachs till 2004, and then a hedge fund management firm till 2009, when he left to join former colleagues at a new hedge fund launched in October 2010.

In 2009, he married Akshata, daughter of Infosys founder N.R. Narayana Murthy and writer Sudha Murthy, who’s also the chairperson of the Infosys Foundation. Sunak and Akshata have two daughters.

Engaged with the Conservative Party since his Oxford days, Sunak got into politics full-time in 2014 when he was selected for the Richmond seat in north Yorkshire — one of the safest Conservative seats, which has been held by the party for more than a century — and won it in the 2015 elections by nearly 20,000 votes.

He retained it in 2017, and 2019 elections, with increased majorities. His predecessor as Richmond MP was William Hague, now Baron Hague of Richmond, who held important cabinet positions, including Foreign Secretary, and was Leader of the House of Commons,

A staunch proponent of “Leave” in the Brexit referendum of 2016 and subsequent parliamentary votes, Sunak’s first government job was Parliamentary Under-Secretary of State for Local Government (2018-19) in the Theresa May government and then as Chief Secretary to the Treasury (2019-20) in the government of Johnson, whose leadership bid he had supported.

He replaced his boss Javid as Chancellor of the Exchequer in 2020, and while he mostly earned plaudits for steering the government’s economic response to the effects of the Covid-19 lockdown, he also became the first Chancellor to be found to have broken the law while in office by breaching lockdown norms.

His wife’s non-domicile status, which let her save huge amount of taxes in the country, also became a major controversy for him.