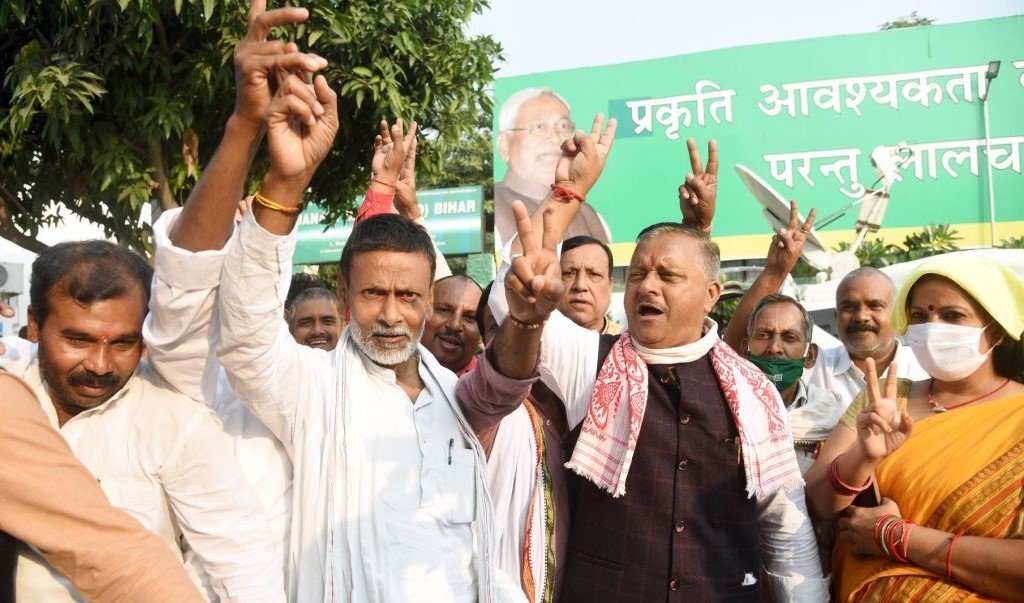 Janata Dal United supporters celebrating after the party’s victory in the Tarapur and Kusheshwar Sthan assembly by-elections at the JDU office on Nov. 2, 2021 in Patna, India. (Santosh Kumar/Hindustan Times via Getty Images)

NEW DELHI – In the recently announced by-elections results, it is a win-win for the Bharatiya Janata Party in Assam, Trinamool Congress in West Bengal and Congress in Himachal Pradesh.

The Bharatiya Janata Party-led alliance in Assam swept the by-elections on all five seats on Nov. 2. The BJP won the Thowra, Bhabanipur and Mariani Assembly seats while its ally United People’s Party, Liberal won the Gossaigaon and Tumulpur Assembly seats. In Mizoram, the ruling Mizo National Front won the Tuirial Assembly seat.

In another northeastern state, Meghalaya, the ruling party, the National People’s Party, won the Rajabala and Mawryngkneng Assembly seats while the United Democratic Party took the Mawphlang Assembly seat in the by-elections.

Moving to central India, BJP registered victory in two out of three Assembly constituencies and the Khandwa Lok Sabha seat. BJP candidates emerged victorious in the Jobat and Prithvipur constituencies. On the other hand, Congress managed to win the Raigaon constituency.

In Haryana, the Indian National Lok Dal won the Ellenabad Assembly seat that went to the by-elections on Oct. 30.

In Bihar, the Janata Dal (United), a constituent of the ruling NDA, retained both the Tarapur and Kusheshwar Asthan Assembly seats.

The ruling Trinamool Congress has won by-elections in all four assembly seats in West Bengal. TMC candidates won in Dinhata, Santipur, Khardaha and Gosaba with the BJP trailing in second position for all four seats.

In Karnataka, BJP has won the Sindgi Assembly by-elections while the party lost the Hangal seat to Congress.

In Himachal Pradesh, the BJP faced a setback as the Congress party won three Assembly seats that went to the by-elections on Oct. 30. Congress also won the Mandi Parliamentary constituency.