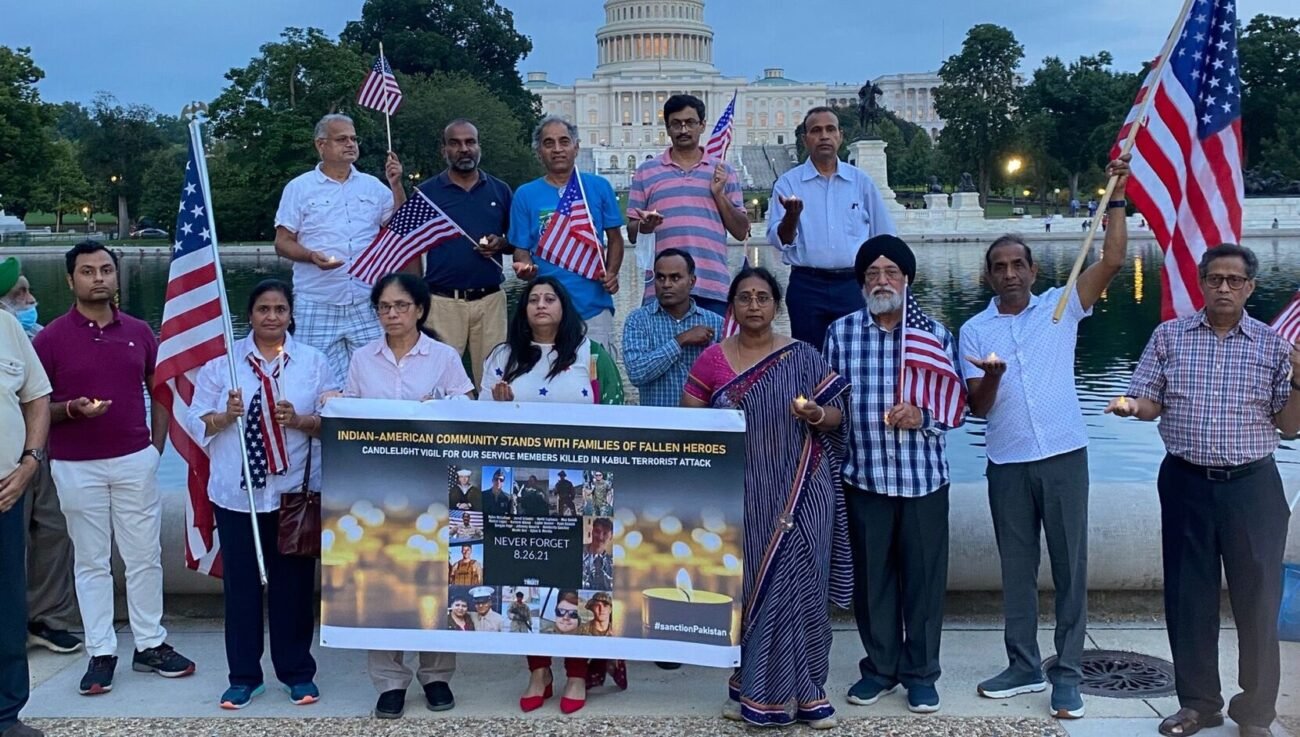 Dr. Surinder Kaul and Achalesh Amar, national coordinators of the vigil, said: “The will of the terrorists is not greater than the will of the good people of India, America, Israel and indeed the world.” (Twitter/Global KP Diaspora photo)

WASHINGTON – Indian Americans across the United States held candlelight vigils to honor the 13 U.S. troops killed in the suicide attack near Kabul Airport as their remains arrived at Dover Air Force Base on Aug. 29 morning. Eleven Marines, one Navy sailor who was assigned to a Marine Corps unit, and an Army Special Forces soldier all died in the suicide bombing at Kabul Airport.

The soldiers were among the 6,000 U.S. troops President Joe Biden deployed to assist in a massive airlift evacuation. More than 170 Afghans died in the suicide blast.

Across 25 cities nationwide, including Washington, DC, New York City, New Jersey, San Francisco, Los Angeles, Atlanta, Houston, Boston, Dallas, Chicago, Columbus and Connecticut, members of the Indian American community held candlelight vigils. Dozens of community members gathered in remembrance and prayer, as many came to show their support to those needing comfort because their loved ones will never be able to make it home.

Dr. Surinder Kaul and Achalesh Amar, national coordinators of the event, said: “The will of the terrorists is not greater than the will of the good people of India, America, Israel and indeed the world.”

“That’s why we will continue to stand shoulder to shoulder, supporting one another, and united by our shared values and commitment to defeating terrorism,” the Houston, Texas-based duo further added.

“The whole world denounces the cowardly ISIS attack on U.S. marines who were peacefully evacuating Afghan people, and the world should remain united to fight this menace once for all,” asserted members of the Indian American diaspora based in Washington, DC.

At the vigil held in New York City at Times Square, Indian Americans Mukesh Modi and Krishna Reddy said, “This was an act of terror, an act of pure evil. We must be firm in the face of evil and terror.”

Biden was joined by several top aides, including Defense Secretary Lloyd Austin, chairman of the Joint Chiefs of Staff Gen. Mark Milley, and Secretary of State Antony Blinken. Eleven of the fallen service members’ families chose to allow their transfers to be open to media coverage. Two others took place out of view, but Biden was present for those as well.