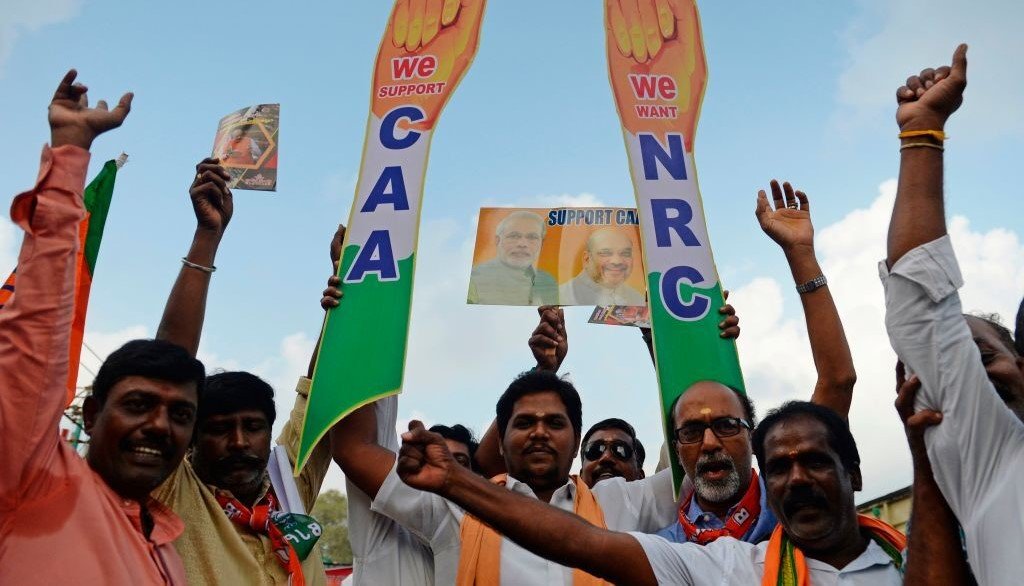 File photo of supporters of the Bharatiya Janata Party waving party flags and holding placards in support of the Indian government’s Citizenship Amendment Act and the National Register of Citizens during a rally in Chennai on Jan. 7, 2020. (Arun Sankar/AFP via Getty Images)

CHICAGO – The Chicago City Council March 24 rejected a resolution that sought to condemn “violence against certain castes and religious minorities” in India, following intense pushback from members of the Indian American community over concerns that it could lead to disharmony within the South Asian community here.

According to a statement from the US-India Friendship Council, the resolution, targeting India’s internal matters and full of inaccuracies, was tabled by the Chicago City Council in July 2020 by Alderwoman Maria Hadden of the 49th ward. The resolution was meant to mislead the reader with its opening remarks “honoring India’s democracy and independence” and was intended to be passed without any discussion or debate, the USIFC statement added.

The proposed draft called Prime Minister Narendra Modi and the BJP government as Hindu extremist, and denounced the Citizenship Amendment Act, which was passed in India’s Parliament, as discriminatory and unconstitutional.

Additionally, it used defamatory language against high-ranking elected representatives of India, unfavorably addressed the abrogation of Article 370 and falsely claimed that police had attacked peaceful protestors with live ammunition and had arrested thousands of them, the statement said.

The resolution failed to gather majority support with 26 members voting against the resolution, 18 voting in favor and six abstaining. During the meeting, some Aldermen felt the proposal needlessly sowed division within Chicago’s Indian American community and that matters at home were more pressing.

Speaking to ANI, Nirav Patel, a retail business owner in Chicago, said: “The resolution was presented in June 2020, which made false narratives about issues such as the Citizenship Amendment Act, National Register of Citizens and Kashmir, under the guise of congratulating India’s 72nd independence. This resolution can lead to severe effects against India and the Indians living in the U.S. We opposed the bill and it has been over an 8-month-long marathon, but the truth has won in the Council.”

According to the US-India Friendship Council, the bill was sponsored by the Council on American-Islamic Relations.

Several fake and non-existent U.S. organizations had supported the resolution, which published wrong pictures and formulated narratives on India, Patel said, further alleging that the resolution was backed by Pakistan.

“We have lived in Chicago for a very long time, and we are scared by recent attacks like the Atlanta shootings, which left six Koreans dead. Mothers do not want to send their children to school in case they get bullied. Students don’t want to go to colleges and universities in fear of getting attacked. Through this resolution, large scale riots can occur. So we came together and voiced against it and defeated the resolution in the Council,” he said.

Patel further said that the fight was not over and there was a need to counter such lies.

Amitabh Mittal, who heads the US-India Friendship Council in Chicago, said the resolution was pushed back six times, but due to the support of paid professionals and a technicality, it was tabled in the Chicago City Council.

Mittal said that the resolution spread nefarious and false narratives of ‘genocide’ against minorities in the Bharatiya Janata Party government in India, which could lead to long term implications in the U.S.

“All organizations and students voluntarily participated in defeating the resolution. The Indian citizens worked tirelessly and devoted valuable time. There was no truth to these statements,” he said.

Mittal also called for a thorough investigation into the organization spearheading the resolution, which he claimed was a ‘quickly-made up’ organization with no real support. According to his research, out of 24 organizations backing the CAIR, seven were found to be bogus.

“A false narrative was set up that there was genocide in India, which is totally not true. We had 2.8 million Muslims in 1947, we have over 100 million now. We did not bring up the Pakistan issue, where there were 4 million Sikhs at the time of Partition, while just 6,143 remain there now. There are also just a few hundred Sikhs left in Afghanistan,” he said, adding, “This resolution is creating disharmony among the Indian diaspora.”

Mittal also opined that with the bigger crime issue – following the deadly shootings in Atlanta and Colorado – and the COVID-19 pandemic, the City Council should be focused more on local problems instead of such false resolutions.

Chicago is home to a sizeable population of Indian Americans in various professions such as doctors, engineers, real estate owners, army veterans and business owners who came together to express concerns against the divisive nature of the resolution and raise awareness about India’s multi-cultural, multi-ethnic population, the USIFC statement said.

The statement also noted that about seven cities have passed such resolutions “behind closed doors under the quiet of the COVID-19 crisis.”