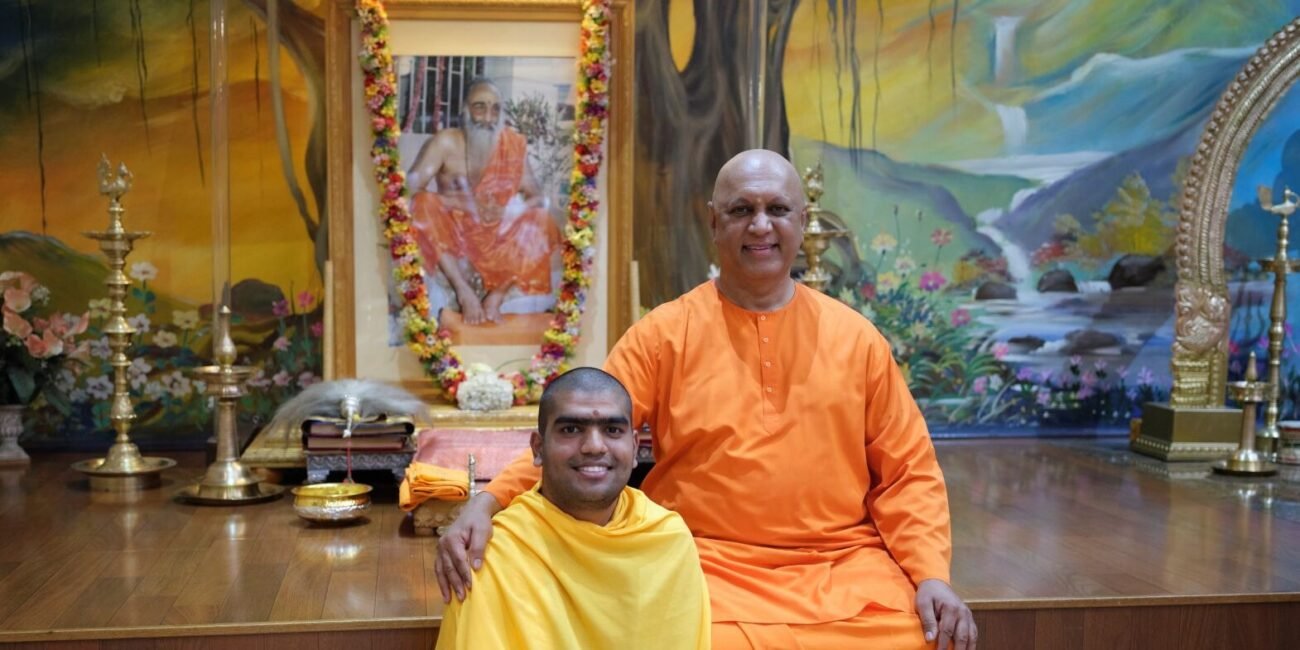 The head acharya of Chinmaya Mission Los Angeles Swami Ishwarananda (right) with the newly arrived Brahmachari Vibhu Chaitanya at the altar of their guru, Swami Chinmayananda, at the center in the city of Tustin in Southern California. Chinmaya’s first on-site Guru Purnima celebration saw the attendees, many of them Indian American, wearing masks in view of the coronavirus pandemic. (Ashok. B photo)

TUSTIN, Calif. – Chinmaya Mission Los Angeles celebrated Guru Purnima July 24, making it the first open on-site event since the onset of the pandemic. The gathering saw attendees socially distanced and, given the new Delta virus threat, wearing masks. The program was also marked as one to welcome a new acharya, Brahmachari Vibhu Chaitanya, into the CMLA family.

The morning at Chinmaya Rameshwaram began with a puja to Sage Veda Vyasa, the revered progenitor of Indian philosophy credited for codifying, explaining and authoring works spiritual seekers delve into. The sage is the emblem of the guru, who alone can effectively guide the seeker toward spiritual fulfillment and liberation. With this in mind, the puja was led with reverence by Vibhuji and conducted by CMLA members with the entire congregation participating from time to time.

In his message, Swami Ishwarananda, the head acharya of CMLA, while welcoming the new brahmachari, spoke of the importance of the young replacing the old so there can be an ingestion of new ideas and energy. Teaching of the ancient scriptures, he said, involved reaching young minds and this required being in touch with the times. Brahmachari Vibhu brings with him experience of teaching at the Chinmaya school in Trinidad.

The new acharya, in his first discourse in Southern California, spoke on the glory of the guru based on the delineation of the subject by the 16th century poet-saint Goswami Tulsidas in his seminal work, “Ramcharitmanas.” A trained Hindustani classical musician and instrumentalist, he peppered his talk with a few sweet bhajans.

A final highlight of the morning was the rendering of the popular “Hari Om, Hari Om” bhajan and reminiscences of incidents with the founder of the mission, Gurudev Swami Chinmayananda, by Mahadevanji, who is known for his immense contributions in initiating the Chinmaya balavihar movement in Southern California.

The program concluded with attendees visiting the newly opened “Dhyan Kutir” on the premises that houses a crystal Shivalinga and is meant as a space for devotees to sit in silent meditation and contemplation.