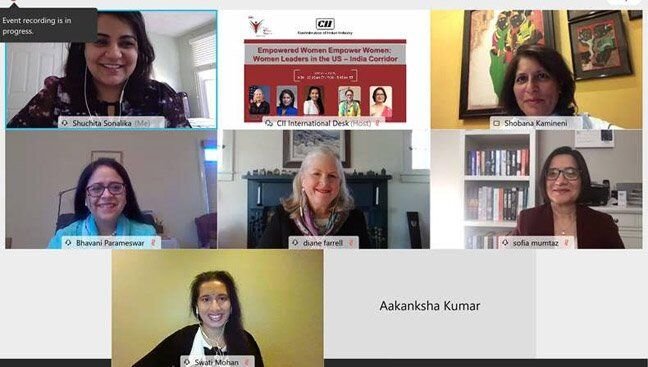 A panel discussion organized by the Confederation of Indian Industry discussed innovative and empowering solutions to the daily challenges women face in the workplace. (video screengrab)

To commemorate International Women’s Day on March 8, the Confederation of Indian Industry brought together leaders within the U.S.–India partnership to discuss innovative and empowering solutions to the daily challenges women face in the workplace.

Countries around the world have rallied for international gender parity with International Women’s Day celebrations for over 100 years, highlighting the social, economic, cultural and political achievements of women.

CII’s own first female president, Shobana Kamineni, executive vice-chairperson of Apollo Hospitals Enterprise Limited, moderated the panel that reflected the vast diversity of women’s experiences from government to the corporate boardroom and even outer space.

CII’s “Women Leaders in the US-India Corridor” panel featured remarks from Diane Farrell, acting undersecretary of commerce for international trade at the U.S. Department of Commerce; Dr. Swati Mohan, lead for guidance and operations for the Mars 2020 Perseverance Mission at JPL, NASA; Bhavani Parameswar, executive director and president at Indivate Inc.; and Dr. Sofia Mumtaz, past chair of CII-India Business Forum USA and president-Pipeline Management and Legal of Lupin Ltd.

Farrell, reflecting on her years of service within the U.S. government, attributed much of her success to remaining flexible in her career path, staying open to opportunities, and taking risks.

She stressed perseverance and working through emotions to free oneself to try new things and solutions to professional struggles.

Mohan spoke about studying, working and building a family within a STEM field known for its gender disparity, and how she strives for the elusive “work/life balance,” according to the CII news release.

The Indian American called for diversity and particularly increasing the representation of women and minorities in every career field and at every level, as all the panelists concurred that women proliferate throughout educational institutions and entry-level positions, but are still largely missing from upper-level, management roles.

From the corporate sector, Parameswar noted her organization’s dedication to mentoring and supporting women throughout their careers, and remarked that in addition to gender constructs, she faced cultural barriers as well when she began working in the U.S. from India, the release said.

Besides learning about American football to build relationships with her predominately male U.S. colleagues, Parameswar also worked within her company to eliminate the “motherhood penalty” and prevent women who chose to have children from suffering lost wages, equity, and leadership opportunities, it said.

Mumtaz was also quick to point out that gender discrimination is both a U.S. and India issue, citing that for women to succeed in the workplace, they must overcome society’s expectations as well as their male peers’ prejudices, as being called pejorative names like “aggressive” to family pressures to quit after marriage are prolific in both countries, it said.

Empowerment, she declared, begins in the home, and young girls have to be taught to see themselves as equal to persist in a world that tells them otherwise, the CII added.

While all the panelists agreed that things are not as they should be, the general consensus of CII’s 2021 Women’s Day Panel is that the world is certainly improving in terms of women’s access and empowerment within the US-India Corridor, the release noted.

Mohan cited that she was selected to work at NASA by a woman leader whose supervisor was also a woman, and reiterated the imperativeness of supporting and mentoring women particularly within male-dominated career fields, the release said.

She also noted that her daughters have access to a plethora of resources like STEM camps, classes and more that did not exist when she was younger.

Mumtaz concurred, praising the positive impact of increasing levels of female education, as well as companies like Lupin that directly focus on encouraging women in the workforce, it said.

Parameswar stressed the advantages for companies and countries’ overall GDP to increase and retain women workers, noting specifically that continued success depends upon examining policies and how they either affect or enable women to excel in their fields.

To conclude, Farrell engendered another cause for hope by suggesting to the panel that the new Biden-Harris Administration is expected to focus more on gender equity for women all around the world, CII said.