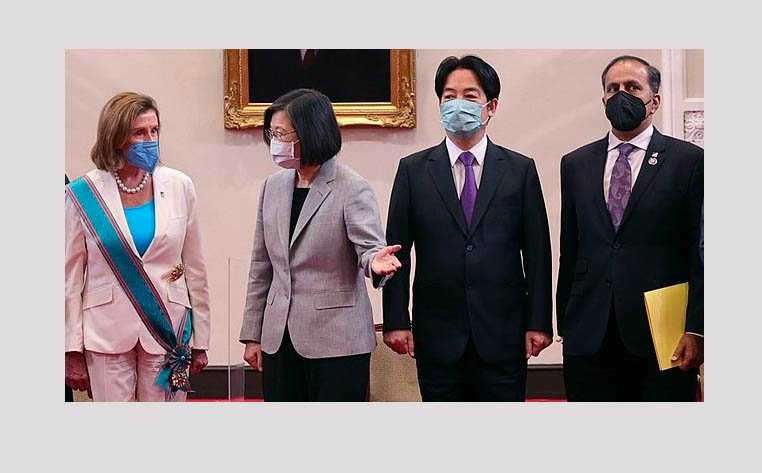 Krishnamoorthi, a Democrat who is a member of the House Permanent Select Committee on Intelligence, met Taiwan’s President Tsai Ing-Wen along with Pelosi and other members of the Congressional delegation on August 3 in Taipei.

Krishnamoorthi now faces threats from China of action against him personally.

China’s Foreign Minister Wang Yi had warned that “those who offend China will be punished”.

Responding to reporters’ questions about it, Foreign Ministry Spokesperson Hua Chunying said on Aug 3: “What I can say is that what needs to be done will be done and these measures will be resolute, strong and effective.”

Beijing officials have denounced the delegation’s visit as a provocation and an infringement of China’s territorial integrity because it considers Taiwan an integral part of the nation.

Although President Joe Biden’s administration has come around to backing the Congressional delegation’s right to visit Taiwan, it did not endorse the idea of the trip when it was floated because of fears of China’s retaliation and introducing more complications to relations with it.

Biden had said that the Pentagon did not think such a visit was advisable now.

In a rare show of solidarity with Pelosi, many Republicans who are usually opposed to her came out in support of her.

Krishnamoorthi, who represents a constituency comprising Chicago suburbs, is a hawk on China.

A bill authored by him to assess “grey zone activities” of China and others against the US through actions like disinformation campaigns and terrorism financing and another to monitor risks to US technology from China-United Arab Emirates cooperation were adopted by the House earlier this year.

The defense budget adopted by Congress in 2020 incorporated wording pushed by him urging China to end aggression against India against the Line of Actual Control in the Himalayas.

The Congressional delegation’s Taiwan trip has provided an opportunity for Chinese President Xi Jinping to arouse nationalist fervor before the Communist Party Congress later this year that must endorse him for a third term as its leader while the country is facing an economic slowdown and risks from Covid spread.

China has announced live ammunition drills around Taiwan on Thursday and has already sent aircraft and naval vessels close to or into its air and sea spaces.

The Congressional delegation began its Asian tour with a stop in Hawaii for consultations with the US Indo-Pacific Command.