HomeFeaturedControversy: Emir Of Qatar Placing A Robe On Messi

Controversy: Emir Of Qatar Placing A Robe On Messi 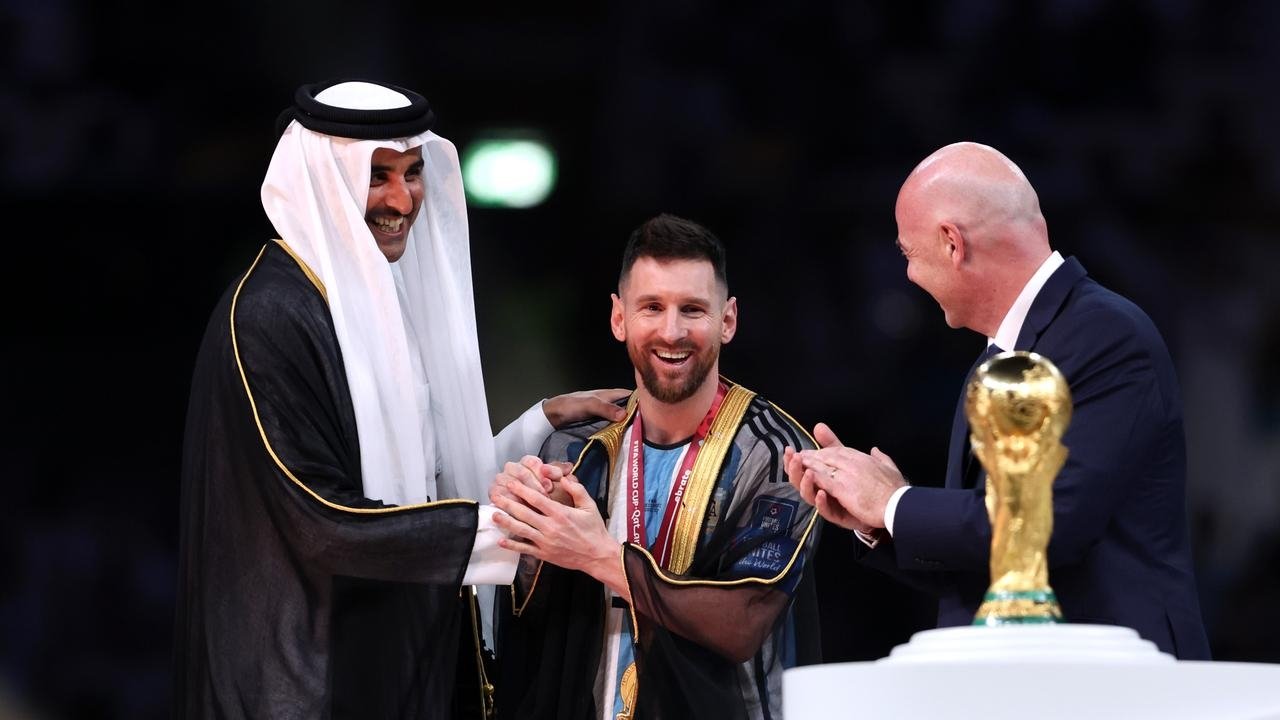 Controversy: Emir Of Qatar Placing A Robe On Messi

DOHA, (IANS) – The Emir of Qatar Sheikh Tamim bin Hamad Al Thani placing a black and gold bisht — a traditional item of clothing worn in the region for special events and celebrations — on the Argentina captain before the 35-year-old was handed the FIFA World Cup trophy has created quite a storm of anger.

The World Cup trophy presentation moment has been the most trending topic with social media users expressing the pride and joy they felt seeing the moment.

Messi allowed the Emir to place the robe around his shoulders before taking the trophy from FIFA president Gianni Infantino.

In his new attire, which covered his national pale blue and white jersey, Messi danced toward his teammates before lifting the trophy above his head, after beating France 4-3 via penalties. With both teams tied three-all at the end of the extra time, the tie-breaker system was applied.

BBC presenter Lineker felt the decision spoiled what should have been a “magic moment”. The former England striker said: “This is a magic moment. It seems a shame in a way that they’ve covered up Messi in his Argentina shirt.”

Ex-Argentina defender Zabaleta agreed, saying on BBC One: “Just why? No reason to do that.”

According to content creator Tallie Dar, who wrote on Twitter: “Messi’s black cloak is called a ‘Bisht’. Arabian warriors wore it after a victory. “It’s also worn by the royal family. The king of Qatar honored Messi as a sign of respect. Signifying Messi as a warrior, who won for his country Argentina.” Dar added: “Messi is being honored as royalty in his Argentinian shirt, as the King of Football.”

Dr Mustafa Baig, a lecturer in Islamic Studies at the University of Exeter, while speaking to DPA said that the bisht is a formal robe worn by royalty, dignitaries, grooms on their wedding day, and graduates at graduation ceremonies. “So only a select few people would actually wear the bisht. They basically honored him by putting it over his shoulders. It’s like a mark of honor, and just kind of a cultural welcoming and a cultural acceptance. And this is a top occasion. I mean, there’s probably no bigger occasion, so they put it on him as a mark of honor and an embrace by Messi of the local culture and a cool thing and smart thinking,” Baig said.

Messi didn’t wear the item of clothing for long, taking it off shortly after the trophy presentation and celebrating with his teammates in Argentina’s distinctive jersey.