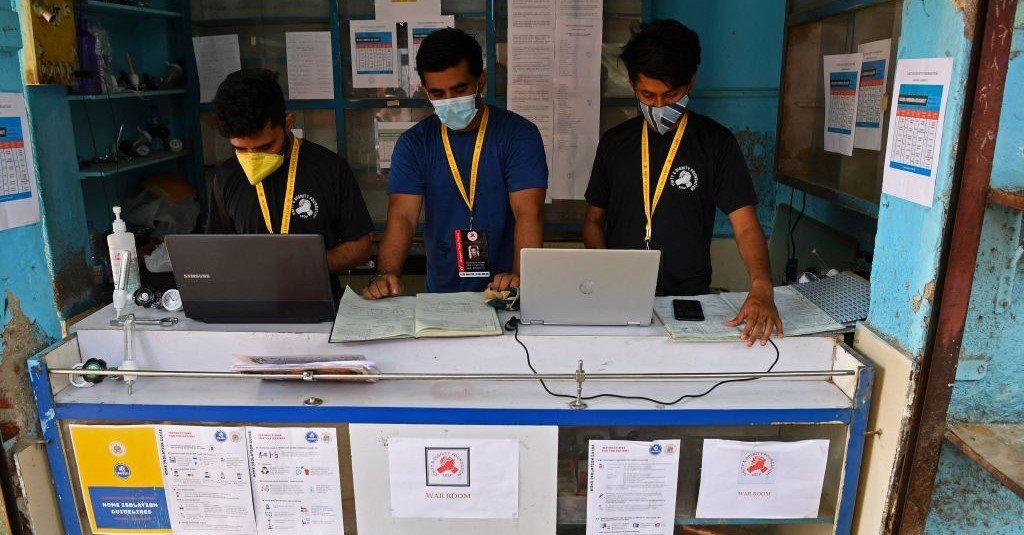 Local resident Shahnawaz Shaikh (center), who sold his SUV car to raise funds in order to start a free service to provide oxygen cylinders to the needy people amid the Covid-19 coronavirus pandemic, manages data in his operating center that was previously being used a general store at a slum in Mumbai on April 28, 2021. (Indranil Mukherjee/AFP via Getty Images)

“Now, this is something we are still gaining data on, but most recent data looking at convalescent sera of Covid-19 cases in people who received Covaxin, it was found to neutralize the 617 variant,” Fauci was quoted as saying during the White House press briefing.

Fauci, President Joe Biden’s chief adviser on the Covid pandemic, quoted the recent Phase 3 clinical trials of Covaxin by ICMR, which claimed that the vaccine neutralizes multiple variants of SARS-CoV-2 and effectively neutralizes the double mutant strain (B1617) as well. He called “vaccination an important antidote.”

“ICMR study shows Covaxin neutralizes against multiple variants of SARS-CoV-2 and effectively neutralizes the double mutant strain as well,” the ICMR said in a tweet. The ICMR study also demonstrated the neutralization potential of Covaxin against the UK variant and Brazil variant.

The second wave of coronavirus, which has crippled India’s healthcare system with lack of oxygen and others, highlighted global inequality, Fauci said, adding that countries have failed to unite to provide an adequate global response to prevent the “tragic” coronavirus outbreak from overwhelming India.

“The only way that you’re going to adequately respond to a global pandemic is by having a global response, and a global response means equity throughout the world,” the Guardian quoted Fauci as saying.

The World Health Organization, meanwhile, said that the double mutant Covid variant – identified as B1617 – that was first detected in India, has spread to “at least 17 countries.”

Up till April 27, the B1617 variant had been detected in over 1,200 sequences uploaded on the open-access database GISAID (the Global Initiative on Sharing Avian Influenza Data) “from at least 17 countries,” the global health agency said in its weekly epidemiological update on the pandemic. Most sequences were uploaded from India, the UK, U.S. and Singapore, it said April 27.

In related news, AP adds from London: Prince Charles said April 28 that he is “deeply saddened” by the surge in coronavirus deaths in India.

He urged the public to back an appeal to buy oxygen equipment for the stricken nation.

In a message to the people of India, the heir to the throne said: “Indian aid and ingenuity has been a support to other countries through this immensely difficult time. As India has helped others, so now must we help India.”

He added that he has a “great love for India” and that he wanted “those suffering the effects of this pandemic in India to know that they are in my thoughts and prayers.”

The British Asian Trust, a charity Charles founded in 2007, launched an emergency appeal called “Oxygen for India” to buy oxygen concentrators, which can extract oxygen from the air when hospital infrastructure struggles to cope. As of Wednesday, the charity had raised more than 140,000 pounds of its 200,000-pound target.

Britain has a huge Indian diaspora community of about 1.4 million people, and many have sought ways to support their home country during this crisis. A separate online fundraiser on the GoFundMe website has collected more than 380,000 pounds within days, and its organizers say the funds have enabled them to order hundreds of oxygen concentrators and ship them to India by the weekend.

A first British government shipment of 200 pieces of medical equipment, including ventilators and oxygen concentrators, arrived in Delhi April 27, and further shipments will take place later in the week.