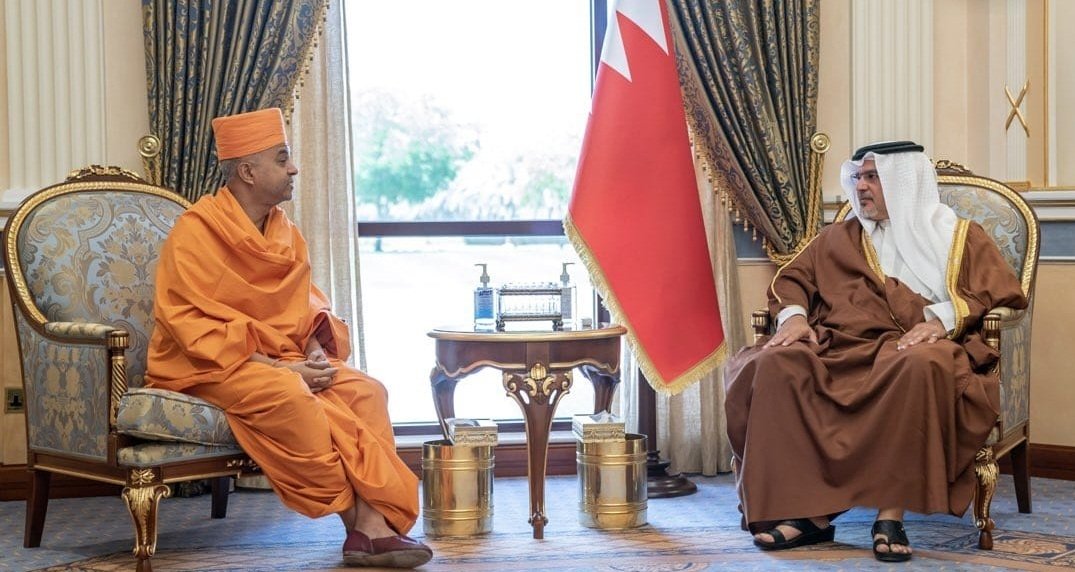 MANAMA, (IANS) – Crown Prince and Prime Minister of Bahrain, Salman bin Hamad Al Khalifa, on May 31 met Swami Brahmaviharidas and a delegation of the BAPS Swaminarayan Sanstha to discuss the construction of a BAPS Swaminarayan Hindu Temple in Bahrain.

It is to be constructed on a land gifted by the leadership of Bahrain on February 1. The meeting, at which Indian Ambassador Piyush Srivastava was present, was led by the international coordinator and head of BAPS Middle East, Swami Brahmaviharidas and included Swami Aksharatitdas, BAPS Bahrain President Dr. Praful Vaidya.

During the meeting, Brahmaviharidas delivered a message from Indian Prime Minister Narendra Modi to the Crown Prince, welcoming the historic moment. He also conveyed blessings and good wishes of the spiritual leader of the global BAPS, Mahant Swami Maharaj.

“The fruition of a long-cherished dream, the Swaminarayan Temple in Bahrain will represent the timeless values of Hinduism and the vision of King Hamad bin Isa Al Khalifa for an inclusive world that will nurture peace and interfaith harmony.”

The Bahrain temple will also welcome people of all faiths who may wish to know and understand Indian traditions and have the space for various cultural and spiritual activities.

Brahmaviharidas said, “We are profoundly grateful to the Crown Prince and Prime Minister of Bahrain and to the Prime Minister of India for this historic gift of land which represents the enriching of warm relations and an exchange of ideas between Bahrain and India which spans millennia. For BAPS, it is the culmination of a precious moment in 1997 when the late Emir Sheikh Isa bin Salman Al Khalifa received His Holiness Pramukh Swami Maharaj at the Royal Palace in Bahrain. In their conversation, Sheikh Isa lovingly and instantaneously told Pramukh Swami Maharaj, ‘Make Bahrain your home.'”

Brahmaviharidas said, “The building of this BAPS Swaminarayan Temple marks a seminal and historic moment for Hinduism, for relations between India and Bahrain, and for international harmony.”