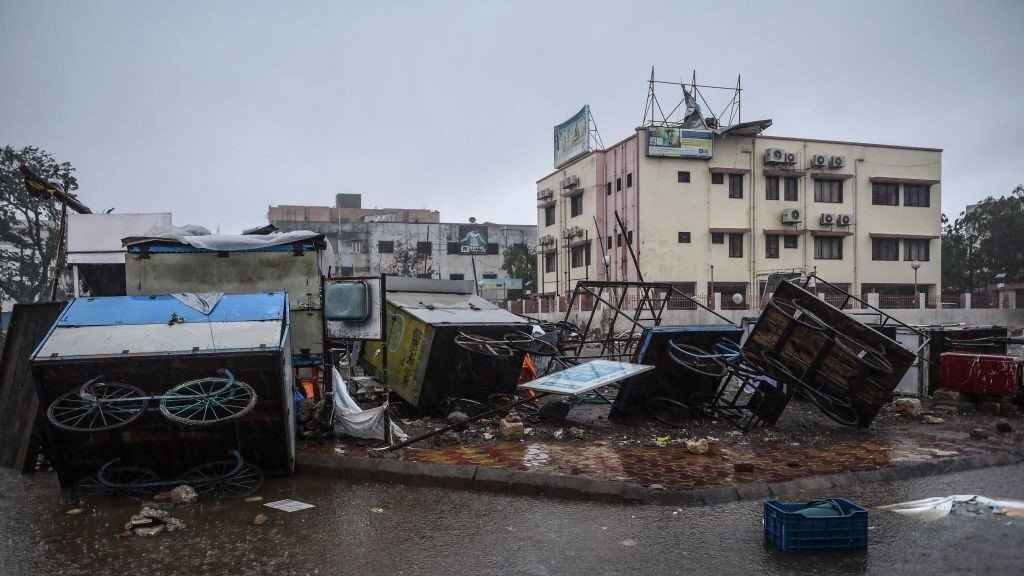 Damaged hand carts are seen near a residential area in Mahua on May 18, after Cyclone Tauktae hit the west coast of India with powerful winds and driving rain, leaving at least 20 people dead. (Sam Panthaky/AFP via Getty Images)

NEW DELHI — Heavy rain and a high tide lashed parts of eastern India and neighboring Bangladesh May 26 as a cyclone pushed ashore in an area where more than 1.1 million people were evacuated during a devastating coronavirus outbreak. At least six people were reported dead.

Cyclone Yaas had already caused two deaths and damaged homes as heavy rain pounded Odisha and West Bengal states before it made landfall in the late morning.

The “very severe cyclonic storm” packed sustained winds of 130-140 kilometers (up to 87 miles) per hour and gusts of up to 155 kph (97 mph) when it made landfall, the India Meteorological Department said. With the storm now almost fully on land, winds were expected to weaken.

In Bangladesh, thousands of people in 200 villages were marooned as their homes, shops and farms were flooded by tidal surges.

In southern Patuakhali district, more than 20 villages in Rangabali went underwater after two river embankments were washed away, said Mashfaqur Rahman, the area’s top administrator. He said at least 15,000 people had taken refuge in cyclone shelters.

In India, television images showed knee-deep water flooding the beachfront and other areas of Digha, a resort town in West Bengal. Wind gusts whipped palm trees back and forth, and water overflowed several river banks.

West Bengal state’s top elected official, Mamata Banerjee, told reporters that 20,000 mud huts and temporary shelters for the poor have been damaged along the coast.

On May 25, a tornado snapped electricity lines that electrocuted two people and damaged 40 houses, Banerjee said.

More than 17 centimeters (6.5 inches) of rain have fallen in the Chandabali and Paradip regions of Odisha state since Tuesday, the meteorological department said. Tidal waves of up to 4 meters (13 feet) were forecast.

Kolkata and Bhubaneshwar airports were shut and train services canceled. Fishing trawlers and boats were told to take shelter.

The cyclone, coming amid a coronavirus surge, complicates India’s efforts to deal with both after another storm, Cyclone Tauktae, hit India’s west coast last week and killed more than 140 people.

Odisha’s chief minister, Naveen Patnaik, appealed to people in shelters to wear double masks and maintain social distancing. “We have to face both the challenges simultaneously,” Patnaik said.

Thousands of emergency personnel have been deployed to help with evacuations and rescue operations, said S.N. Pradhan, director of India’s National Disaster Response Force. The air force and navy were also on standby.

A year ago, the most powerful cyclone in more than a decade hit eastern India and killed nearly 100 people.

Some of the deadliest tropical cyclones on record have occurred in the Bay of Bengal. A 1999 super cyclone killed around 10,000 people and devastated large parts of Odisha. Due to improved forecasts and better relief coordination, the death toll from Cyclone Phailin, an equally intense storm in 2013, was less than 50, according to the World Meteorological Organization.