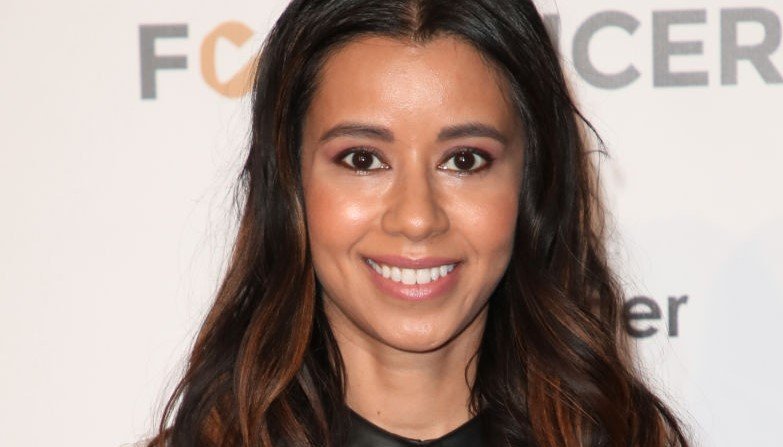 Indian American actress Sujata Day of HBO’s “Insecure” fame has donned the director’s hat for the first time for a story that is close to her heart.

Day has written/directed/produced and stars in “Definition Please,” a dramedy which follows a former spelling bee champ still struggling to make good on her childhood promise while contending with a complex family life.

The 90-minute drama follows the journey of Monica Chowdry, once a Spelling Bee champ, who now lives with her ailing mother in a Pennsylvania suburb, where she tutors prospective spellers. Although she lands a job as a clinical research lab technician in Cleveland, she is unable to decide on the path forward for her.

The film also masterfully tackles the subject of mental illness. Monica reconnects with her estranged brother Sonny – who battles with mental illness – on their father’s first death anniversary.

Day told elle.com that it was really important for her to make sure that each of the characters had flaws and no one was perfect, because in real life, that’s how it is.

“I based Monica on myself and the desire to impress my parents and get good grades. I have an engineering degree—I am sort of the model minority too—but I went into entertainment, acting, and writing. Even when I was a growing up in this middle-class suburb, we were all partying and lying to our parents and doing stuff we weren’t supposed to be doing and hiding ourselves,” she told elle.com. For me, ‘Definition Please’ was an opportunity to show that South Asian Americans are more than just the perfect smart technical engineers. There are other sides of us as well.”

Mental illness stigma is also real among people of color, Day told the publication, adding that growing up, she saw her Indian American friends suffer from that but there was very little acknowledgement that that’s what it was.

“‘Why did Anan run away? We live in a big house. He gets good grades and gets everything he asks for.’ Meanwhile, among ourselves, we were like, ‘Oh, he’s definitely depressed.’ I could see the difference between my white friends and my POC friends, because for my white friends, if they were depressed, it would be like, ‘Oh, I’m in therapy and we talk about it all the time.’ I wanted to tackle those differences and tackle mental illness and families, because you either have someone around you who has a mental illness, or you have it yourself. It’s really important to talk about it, treat it like a physical illness, go to therapy, and not be ashamed.”

The film won the Narrative Award at the 2020 CAAMFest Forward Awards where the jury said that “Definition Please” is a “captivating story of family, friendship, vocabulary, expectations, and not allowing oneself to be defined by a singular moment.”

“‘Definition Please’ is loosely based on my relationship with my family and growing up Indian American in my hometown of Greensburg, Pennsylvania,” Day told Deadline previously. “Instead of waiting for the powers that be to greenlight my film, I greenlit it myself.”

The film, which has been touring the film festival circuit, will premiere March 13 at the ninth annual Seattle Asian American Film Festival, which showcases feature-length and short films by and about Asian Americans across North America, with an emphasis on filmmakers from the Pacific Northwest.