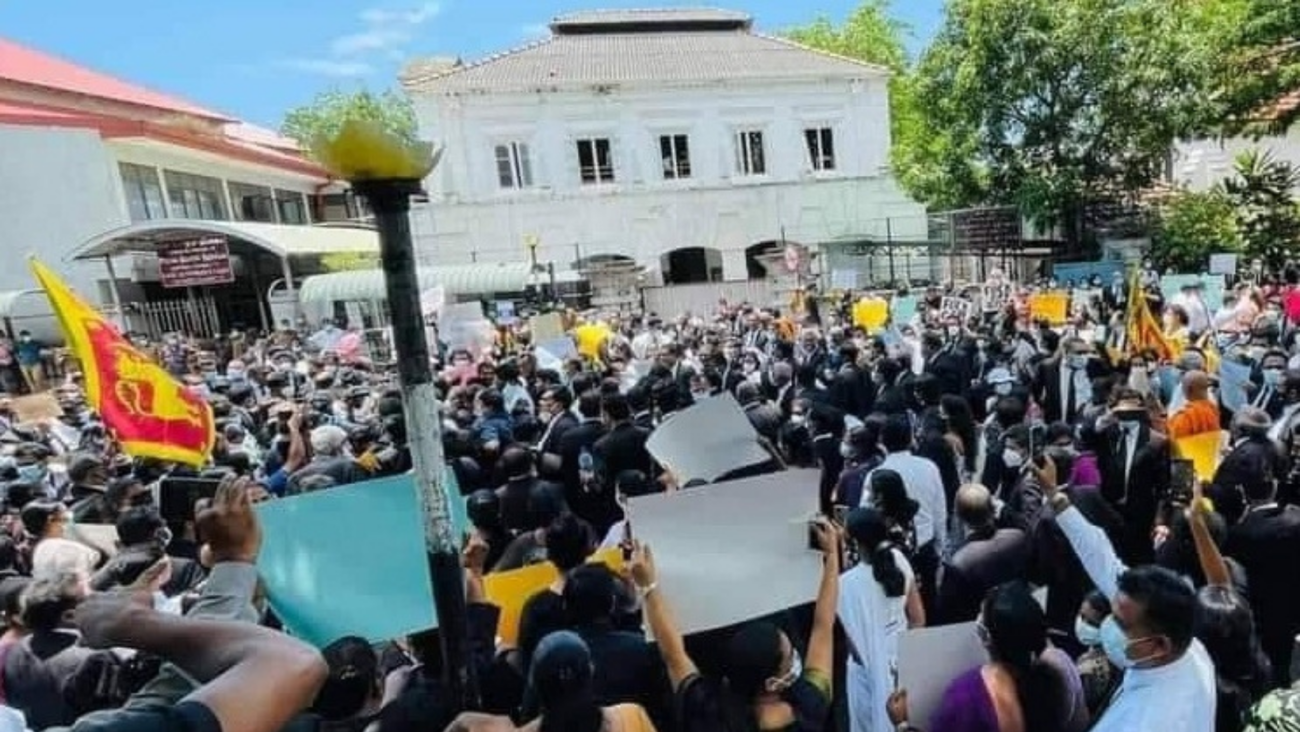 NEW DELHI (IANS) – As Sri Lanka faces the crisis of an economic meltdown, India has emerged as its true friend. Assistance in different forms extended to the people of the island country under New Delhi’s ‘Neighborhood First’ policy has gone a long way to mitigate the crisis when Beijing has refused to accede to Colombo’s request to restructure the debts incurred by Sri Lanka under the Belt and Road Initiative of China so it can extricate itself from the debt trap it finds itself in.

Because of an unprecedented shortage of foreign exchange, the basic needs of the people of Sri Lanka cannot be met. There are huge queues outside petrol pumps as there is no foreign exchange reserve to import petrol, pharmacies have run out of medicines and newspaper houses have run out of newsprint. Since Jan 2022, the inflation rate has crossed 18 per cent in Sri Lanka. Angry residents have hit the streets in protest and the Lankan government responded by imposition of curfew.

To help the island country, New Delhi has adopted a two-pronged strategy; extending to Sri Lanka lines of credit to tide over the immediate forex crisis and strengthening its economy through non-official channels like foreign direct investments and shoring up the sagging tourism sector of the island nation which is a major foreign exchange earner for Colombo.

The suspension of tourism in the face of Covid – 19 has triggered the crisis that faces Sri Lanka today. With foreign exchange earnings from tourism falling, the debt burden has become unsustainable for Sri Lanka. At the end of February 2022, Colombo was left with a forex reserve of only $2.31 billion while it was faced with a debt repayment burden of $4 billion in 2021-22. The bulk of the debt was owed to China, nearly $8 billion, with nearly $2 billion payable to Beijing in 2021-22.

Between 2005 and 2015, when Mahinda Rajapaksa was the President of Sri Lanka, Colombo had borrowed heavily from China to build infrastructure, including a mega port city at Hambantota. These capital-intensive projects did not yield the expected returns, leaving the Lankan economy reeling under a mountain of debt. The International Monetary Fund in a recent report has stated that Sri Lanka faces the problem of solvency and foreign debt is the culprit.

New Delhi’s aim in extending a helping hand to Colombo is not to shore up the beleaguered ruling Rajapaksa family whose human rights records during the days of civil war were questionable. India wants to help the people of Sri Lanka when they are faced with a crisis in their daily life.

At a humanitarian level, India is providing shelter to the fresh arrival of refugees, mostly ethnic Tamils, who have escaped from Lanka in the wake of the unprecedented economic crisis. On Mar 22, 2022, 16 Sri Lankan Tamils arrived on the Rameswaram coast in two batches.

For decades, Sri Lankan Tamils have arrived in Rameswaram and other coasts, escaping civil war and hostilities; but the latest arrivals were different. They were economic refugees, escaping the economic crisis. Only 30 kms away across the Palk Strait, the Tamil Nadu coast has always been a preferred refuge for Sri Lankan Tamils because of their ethnic affinity. A reasonable assessment is that more of Lankan Tamils would arrive in Tamil Nadu in the coming weeks, because of unemployment and skyrocketing inflation.

Refugees from Sri Lanka have continued to arrive in different waves in Tamil Nadu, where people and political parties have traditionally welcomed them. About 19,000 Sri Lankan families, or nearly 60,000 people, still live in 108 refugee camps set up for Lankan Tamils in Tamil Nadu. Another about 34,000 Lankan Tamils live outside the camps with refugee certificates. The Tamil Nadu government provides free education, health care, ration. The head of a refugee family gets a monthly allowance of at least Rs 1,000. Many of the refugees work in hotels and other sectors, or as daily wage laborers. The DMK government has announced a scheme to build 7,469 houses for Sri Lankan refugees, 3,520 in the first phase, and provide financial assistance to refugee students for higher education.

In Mar, Finance Minister of Sri Lanka Basil Rajapaksa met Prime Minister of India Narendra Modi in Delhi and noted the deepening people-to-people relationship between the two countries, including in the cultural sphere. Rajapaksa emphasized on the need for bilateral economic cooperation. Modi promised that India would continue to stand with the people of Sri Lanka.

To boost tourism in Sri Lanka, the Indian Prime Minister proposed that the two countries jointly promote two religious tourist circuits, the Buddhist circuit and the Ramayana circuit. Buddhism had travelled from India to Sri Lanka.

King Ashoka’s son Arahant Mahinda converted then king of Sri Lanka Devanampiya Tissa to Buddhism in the 3rd century B.C., says a research paper in Oxford Bibliographies. Theravada Buddhism is the major religion of the island. The tradition of Ramayana and Lord Rama building a bridge across the sea from Rameswaram to reach Lanka with his Army is too well-known.

With one-third of all tourists visiting Sri Lanka being from India, the move of Modi to promote the island as a destination for religious tourism will further increase the footprint of visitors from India to Lanka.

In his meeting with Basil Rajapaksa, Modi promised to provide funds for the improvement of Buddhist temples in Sri Lanka, and develop 52 tourism sites in the island.

During his visit to New Delhi in Feb, Foreign Minister of Sri Lanka G. L. Peiris noted that the arrival of Indian tourists to Lanka has been a bridge between the two countries. For the past several months now, the largest number of international arrivals in Lanka has been from India. Since the improvement in the pandemic situation, about 100,000 tourists have arrived in Sri Lanka, more than 45 percent of them being from India.

It was also decided in the meeting between Narendra Modi and Basi Rajapaksa that unresolved conflicts over fishing rights and clashes between fishermen of the two countries would be resolved with a humanitarian approach.

Keeping in view that India is its closest neighbour, with a relationship more than 2,500 years old and a long legacy of intellectual, cultural, religious and linguistic interaction, Sri Lanka, in its hour of crisis, has invited more Indian investments in various sectors, including ports, infrastructure, energy and power and manufacturing. A fresh flow of foreign direct investment will help shore up the foreign exchange reserve position of Colombo.

Besides being its second largest trading partner, India is one of the largest contributors of FDI in the island country, with a number of leading Indian companies having an established presence there. Between 2005 and 2019, FDI from India to Sri Lanka totalled to about $ 1.7 billion. The investments are mostly in the areas of petroleum retail, tourism and hotel, manufacturing, real estate, telecommunication and banking and financial services.

In the wake of the back-to-back visits of the Lankan Foreign Minister and the Minister of Finance to seek India’s help in its hour of crisis, India has agreed to develop three wind farms in Sri Lanka, in three islands off Jaffna, with a budget of $12 billion. The wind turbines would help when Sri Lanka is faced with a severe shortage of power.

The Indian project, for which an MoU was signed during Indian Minister for External Affairs S. Jaishankar’s visit to Colombo to attend the BIMSTEC conference, would effectively replace a Chinese offer. Colombo had earlier resolved to award the project to a Chinese firm but desisted after taking into Indian concerns about a Chinese venture coming up close to the Indian shores.

During his Colombo visit, the Indian External Affairs Minister virtually inaugurated a Cultural Centre at Jaffna, built with Indian grant at a cost of Rs 75 crore. The center has an auditorium with a capacity of 600 people, a multimedia library with online research facilities, exhibition and gallery space and a museum. There is a facility of training in various arts and a language lab. The Centre will provide social infrastructure to people of the Northern Province and promote the ancient cultural heritage of Jaffna.

As an immediate measure to help Sri Lanka tackle its power shortage, Indian Oil has decided to release 6,000 tonnes of diesel. To combat the petroleum shortage on a long- term basis, an agreement has been reached with India to redevelop the World War II era oil tank farm in the eastern port district of Trincomalee. The Ceylon Petroleum Corporation and the local operators of IOC would get 24 and 14 of the tanks, respectively, while the remaining 61 oil tanks would be developed by Trinco Petroleum Terminal, a joint venture of Ceylon Petroleum Corporation with 51 percent share and local IOC with 49 percent share.

During Jaishankar’s visit to Colombo, India and Sri Lanka signed an MoU for Bharat Electronics to set up a state-of-the-art Maritime Rescue Coordination Centre in Colombo; a significant step as it would enhance co-operation on maritime security between India and Sri Lanka in an Indian Ocean region where China trying to expand its influence. India has also provided a naval floating dock to the Lankan navy and two Dornier aircraft for the air force of Sri Lanka.

Beijing is yet to respond to the request made by Colombo to restructure the Chinese debt, when Foreign Minister of China Wang Yi visited Sri Lanka in the early part of January 2022. All that China may offer is a credit of $2.5 billion, but that, too, was at the stage of consideration till the end of March 2022. India, on the other hand, in a remarkable display of neighborly feeling, has already extended a line of credit of $1 billion to help Sri Lanka buy food and pharmaceutical products; and another line of credit of $500 million in Feb to enable Colombo to buy petroleum products.