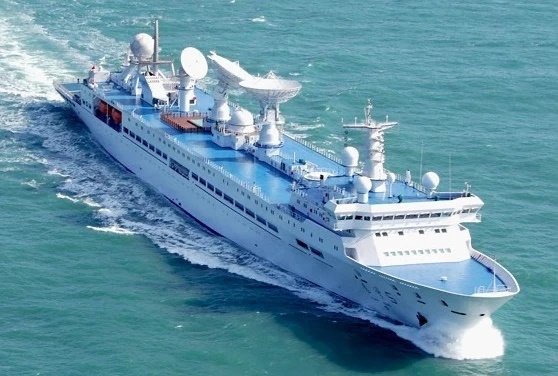 COLOMBO, (IANS) – A controversial Chinese ship with ballistic missile and satellite tracking facilities docked in Sri Lanka’s Hambantota port, despite security concerns raised by India about the vessel’s presence in nearby waters.

However, the ship’s arrival appears to have aggravated tensions between New Delhi and Beijing, who have both spent billions of dollars on development and deals with Sri Lanka, an island of 22 million people that sits on a key trading route.

The Yuan Wang 5 had originally requested permission to dock at the port last week, but the visit was delayed after concerns were raised about the ship’s presence, though India denied putting any pressure on Colombo.

China says the ship is used for scientific research, but the US Defense Department says the ship is under the command of the People’s Liberation Army (PLA) and is capable of tracking satellites and missile launches, CNN reported.

On August 13, Sri Lanka’s Foreign Ministry said the government had engaged in “extensive” consultations with “all parties concerned” with a “view to resolving the matter in a spirit of friendship, mutual trust and constructive dialogue”.

It said the ship had been given permission to dock on the condition that no scientific research was conducted in Sri Lankan waters.

The ship’s arrival was always going to be controversial — China leased the Hambantota port from Sri Lanka in 2017 for 99 years after Colombo failed to pay debts related to the construction of the facility.

At the time, the deal raised concerns that it would give China access to a key shipping route, putting it within India’s traditional sphere of influence. And the presence of a ship packed with advanced technology has made Sri Lanka’s neighbors nervous, CNN reported.

According to a US Defense Department report published last year, the vessel is under the command of the PLA’s Strategic Support Force (SSF), “a theater command-level organization established to centralize the PLA’s strategic space, cyber, electronic, information, communications, and psychological warfare missions and capabilities”.

Carl Schuster, a former US Navy captain and former director of operations at the US Pacific Command’s Joint Intelligence Center, said New Delhi’s concern about the ship’s presence in Sri Lanka was likely due to its monitoring capabilities, CNN reported.

China’s Ministry of Foreign Affairs said the ship is conducting scientific research “in accordance with international law. It does not affect the security and economic interests of any country and should not be interfered with by third parties.”