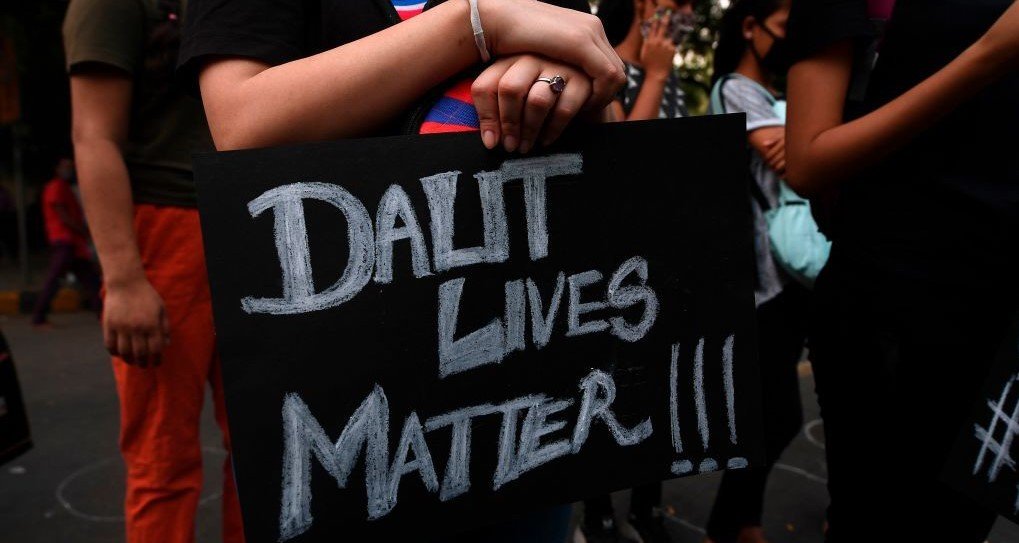 Last July, a Dalit employee at Cisco, based in Santa Clara County, complained to California’s Department of Fair Employment and Housing that he was being discriminated against at his workplace by two Indian American supervisors. Above: A demonstrator holds a placard reading ‘Dalit Lives Matter’ during a protest in New Delhi on Oct. 4, 2020. (Sajjad Hussain/AFP via Getty Images)

More than 462 people, the majority Indian Americans, provided testimony over seven hours April 29 evening, as the Santa Clara County (California) Human Rights Commission, held a hearing on the divisive issue of caste discrimination and whether it exists in the U.S., particularly in Silicon Valley’s technology companies.

Protima Pandey, director of the Office of Women’s Policy at the County of Santa Clara, kicked off the hearing, stating: “Covid 19 has exposed the inequalities of our society. But make no mistake – they have always existed.”

“And now that we know, we must do better,” said Pandey, noting that the hearing was being held during the birth month of Indian social activist BR Ambedkar, who championed the rights of Dalits, often called “untouchables.”

Bryan Franzen, chair of the Santa Clara County Human Rights Commission, said that a group of people had approached the Commission, saying they had been discriminated against because of their caste. “This issue was new to us,” he said, adding that the Commission spent six months researching the issue before holding the hearing.

The Commission will now recommend next steps and determine whether action must be taken on the complex topic. “This is not a referendum on a group or practice,” said Franzen. The Commission is charged with determining whether county employment laws must be amended to include caste as a protected class.

Last July, a Dalit employee at Cisco, based in Santa Clara County, complained to California’s Department of Fair Employment and Housing that he was being discriminated against at his workplace by two Indian American supervisors, Sundar Iyer and Ramana Kompella. DFEH filed a case against Cisco, Iyer, and Kompella last July in the U.S. District Court for Northern California.

The Dalit employee, who is not named in the lawsuit, alleged that he received lower wages and fewer opportunities because of his caste. The defendants told him he had only gotten into a prestigious IIT university because of India’s affirmative action policies.

When he tried to speak out, Kompella and Iyer allegedly retaliated against him. Cisco investigated and did not “substantiate any caste-based or related discrimination or retaliation” against the employee.

DFEH dropped the case last October, but then refiled it with California’s Supreme Court. Several Indian American organizations, including the Ambedkar International Center, have filed briefs supporting the case, which was first heard by the Supreme Court in March.

At the Santa Clara County Human Rights Commission hearing, several Dalits testified anonymously, saying that they had experienced discrimination at their workplaces. Ajantha Subramanian, professor of Anthropology and South Asian Studies at Harvard University, noted that the majority of tech workers in the Silicon Valley come from a handful of elite universities in India. “Indian professional networks continue to promote discrimination,” she said, adding that making caste a protected class in employment law is absolutely necessary.

“Caste is one of the oldest systems of oppression in the world,” Thenmozhi Soundararajan, executive director of Equality Labs, told KPIX News ahead of the hearing. “Caste is a system of social exclusion that is similar but not the same as race. And it determines the whole of your life.”

“Many of our community who were oppressed fled to the U.S. to escape caste apartheid. But we never expected to see it recreated here,” she said.

Girish Shah, a member of the Silicon Valley Interreligious Council, testified that India has banned the caste system, and moreover has created an affirmative action system designed to “uplift Dalits.”

“The current laws provide sufficient protection. The inclusion of caste will stereotype all Indians,” he said.

The Hindu American Foundation agrees. On its Web site, the organization said it vehemently opposes any form of discrimination, but believes that existing U.S. federal law and California state law are the best means to address the issue.

“Caste as a specific category is problematic because it singles out and targets people of Indian descent given the singular and strong association of caste and a caste system with India,” said the organization.

“Caste as a specific class also suggests that there is a prevalent form of prejudice and malice amongst only people of Indian and/or South Asian descent and Hindus that is so entirely different and abhorrent that they should be marked a suspicious class on the basis of their race, national origin, ethnicity, or religion and specifically monitored and policed,” it said.

This in itself is discriminatory in light of the fact that prejudice and discrimination based on social backgrounds such as clan, class, sect, tribe, or other factors is prevalent within all countries and cultures.