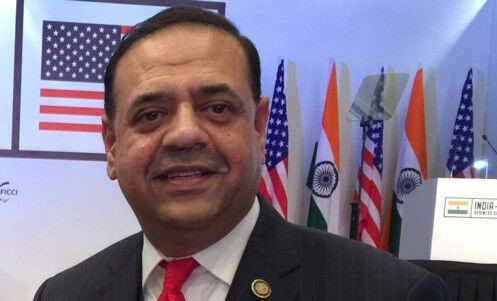 Hassan, a Houston, Texas, resident, is founder chairman of the Apex Group of Companies and has long been a member of the Democratic Party in the U.S., where he had recently received an invite to the limited Biden-Harris Jan. 20 inauguration.

Nandan Jha, secretary-general of the Gandhi Mandela Foundation, administered the oath, which took place at the foundation headquarters in New Delhi, according to reports.

Hassan is a resident of Houston for the past 40 years and currently serves on the advisory board for several multinational companies in the U.S. and Asia.

He is the founder of the Apex Group of Companies and brings with him a wealth of knowledge in international relations through his experience in consulting in both in the United States and abroad, his bio on the Apex website notes.

He has served as an adviser on presidential, gubernatorial, senatorial, congressional, mayoral and judicial campaigns in the U.S. over the past 20 years and has served as a national finance co-chair for the Obama for America campaign in both 2008 and 2012.

Over the years, Hassan has also served on the National Advisory Board as a member of the Democratic National Committee, the bio said.

Most recently, Hassan served on the board of advisors for South Asians for Biden, which mobilized a nationwide get-out-the vote effort among the greater South Asian community.

In 2019, Hassan was appointed to and is currently serving on the advisory board for the Global Eternal Gandhi Museum, a non-profit organization seeking to create, through the life and work of Gandhi, a thriving, vibrant educational organization aimed at changing the world through its visitors while creating a sustainable and successful new resource for the greater Houston area, reports said.

“My job would also be to involve the younger generation, my children, my grandchildren and generations to come, I would like them to know what GMF is all about, and get them engaged,” Hassan said of his new role in a statement. “I see a lot of young people here, who are very excited to be part of this fabric, so similarly I would like to expand that in the United States and carry this mission through.”

The Gandhi Mandela Foundation is a Government of India registered trust that promotes individual freedom, civil liberties, and human rights across the globe.

The headquarters is situated in New Delhi with a global presence in the U.S., Africa, Russia, London, Switzerland, China, Nepal, and Bangladesh.

The Foundation instituted the Gandhi Mandela Awards during the 150th birth anniversary of Gandhiji to celebrate those who have carried forward the legacies of Mahatma Gandhi and Nelson Mandela.