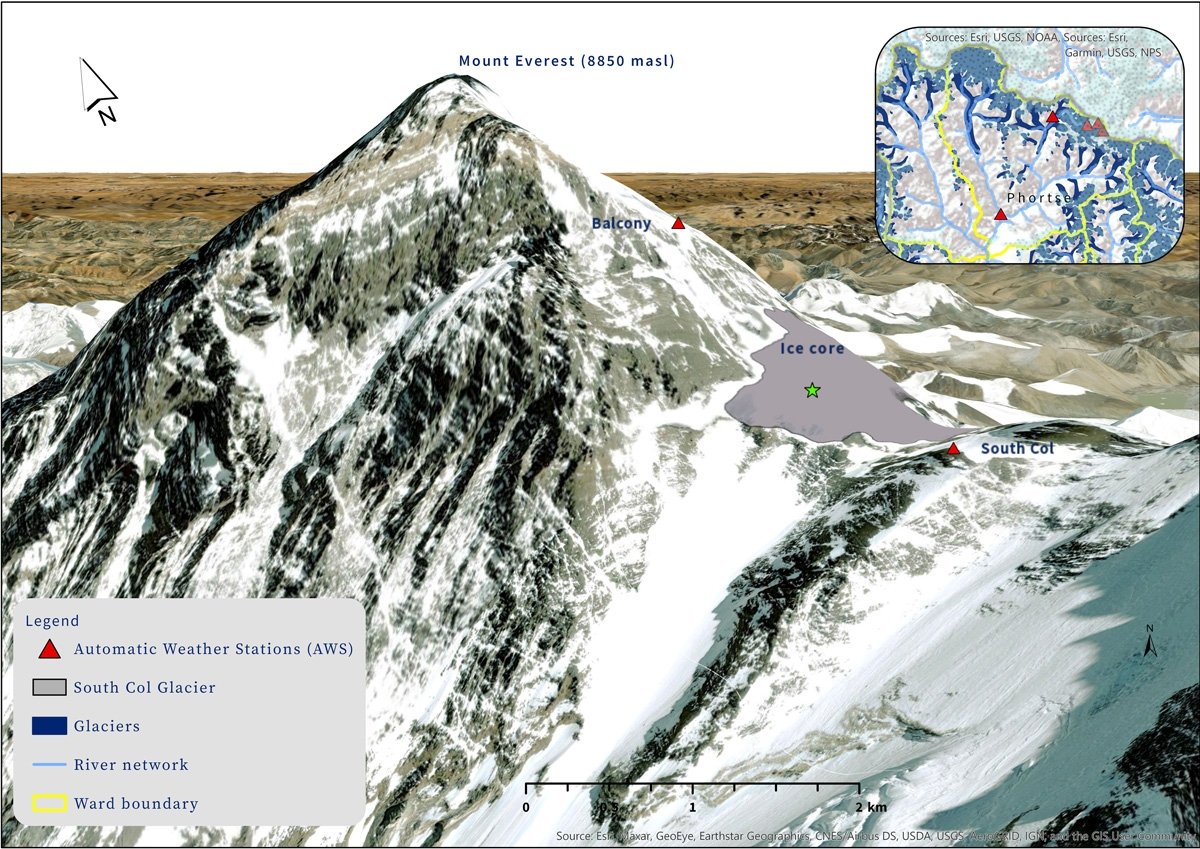 NEW DELHI (IANS) – With estimated thinning rates of nearly two meter per year, glaciers on the Mount Everest such as South Col Glacier, which is located at the highest point in the world, the ice on Mount Everest has been thinning at an alarming rate, a latest study has found.

This study addresses a key question from the 2019 National Geographic and Rolex Perpetual Planet Everest Expedition on whether glaciers at the highest point on earth are experiencing the impacts of climate change.

The Mount Everest region has indeed been losing ice significantly since the late 1990s, it was revealed in an article published in the Nature Portfolio journal ‘Climate and Atmospheric Research’.

This is significant in view of the fact that earlier studies concentrated on glaciers at lower heights and those studied from the higher altitude were done with the help of satellite images. Himalayas are called the third pole as it is the repository of highest volume of ice outside the two poles.

The Everest Expedition, the single most comprehensive scientific expedition to Everest, conducted trailblazing research on glaciers and the alpine environment. The multidisciplinary team comprised scientists from eight countries, including 17 Nepali researchers. Three of the co-authors of this study were from the International Centre for Integrated Mountain Development (ICIMOD).

The findings are based on data from a 10-metre-long ice core obtained from South Col Glacier at an elevation of 8,020 meters above sea level (masl), as well as meteorological observations from the two highest automatic weather stations in the world located on the southern slopes of Mount Everest at 7,945 masl and 8,430 masl.

South Col Glacier lies on the main climbing route of Mount Everest on its southern ridges. At a mean elevation of 7,985 masl, this relatively small glacier is undoubtedly the highest glacier in the world. The surface of the glacier is mainly bare ice, apart from seasonal snow and a perennial snow apron along the sides of Mount Everest, which comprise the upper reaches of this southerly oriented glacier.

“Using micro radiocarbon dating, researchers estimated that the age of ice in the glacier was about 2000 years old. Over the past two thousand years, ice accumulation was the equivalent of 27 mm of water per year, and an overall net thinning of the equivalent of 55 m of water measured since the mid-1800s but accelerating in recent decades,” the study said.

South Col Glacier lies at one of the sunniest spots in the world. Melting here can be up to 20 times faster when snow cover disappears, and the bare glacier ice is exposed. This is especially important for glaciers like this one that get very little snowfall. “The rate of ice loss measured is more than 80 times faster than the 2000 years it took to form this thickness of ice,” it said.

With estimated thinning rates of nearly 2 m per year even glaciers such as South Col Glacier, which is located at the highest point in the world, may vanish by mid-century. Moreover, the study also shows the importance of snow cover and how quickly things can change for high mountain glaciers when it disappears.

“This warming will have a cumulative effect on the experience of climbing Mt Everest. Some areas of the route’s surface will gradually change from snowpack to ice to exposed bedrock, and avalanches will become dynamic because ice is more brittle. The long-term effect on the availability and stability of these water towers which will impact downstream communities is of major concern,” it said.

“This tipping sensitivity and increased mass loss of glaciers, particularly at the world’s highest elevations, where temperatures never rise above zero degree Celsius, is a wake-up call for us all. It also shows the importance of direct measurements on glaciers to increase our understanding of the processes when forecasting how these landforms will respond to changing climate,” said Tenzing Chogyal Sherpa, Remote Sensing and Geoinformation Associate, ICIMOD.

Glaciers in the Himalayas make a significant contribution to water resources for millions of people. Most previous studies have focused on glaciers at lower altitudes that are easier to access. These show a strong trend of shrinking, with an accelerating rate in recent years. Earlier work on high altitude glaciers has relied on satellite measurements. However, with the information we now have from the weather stations and the ice core, it is clear that even the highest glaciers are melting rapidly and at an accelerating rate. These changes will have tremendous consequences on people’s livelihoods and wellbeing.