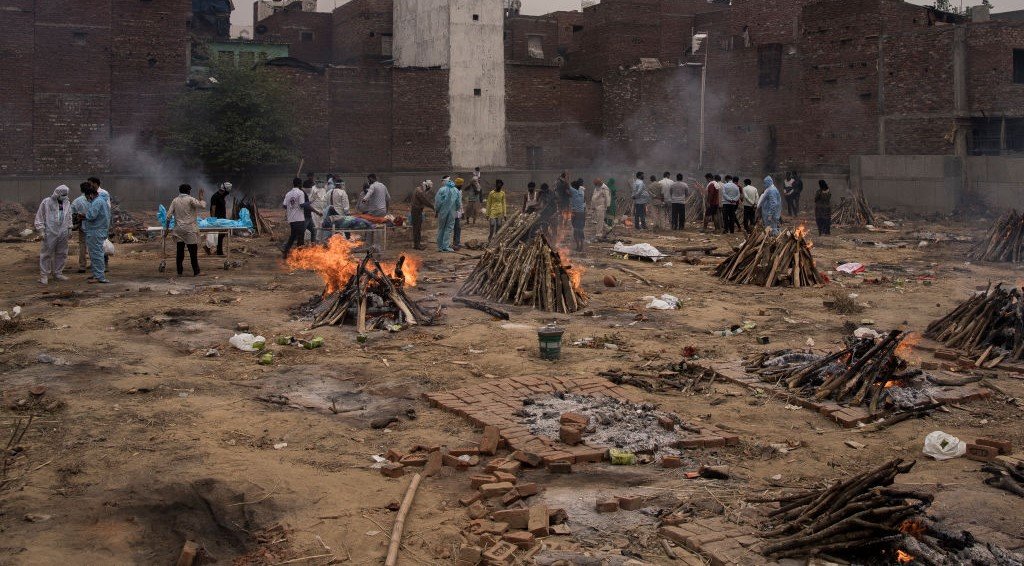 Multiple funeral pyres of those patients who died of the Covid-19 coronavirus disease are seen burning at a ground converted into a makeshift crematorium where mass cremation of covid deaths were held on April 20, 2021 in New Delhi, India. (Anindito Mukherjee/Getty Images)

NEW DELHI — The world’s fastest pace of spreading infections and the highest daily increase in coronavirus cases are pushing India further into a deepening and deadly health care crisis.

Some 2.7 million vaccine doses are given daily, but that’s still less than 10 percent of its people who’ve gotten their first shot. Overall, India has confirmed 15.9 million cases of infection, the second highest after the United States, and 184,657 deaths.

The latest surge has driven India’s fragile health systems to the breaking point: Understaffed hospitals are overflowing with patients. Medical oxygen is in short supply. Intensive care units are full. Nearly all ventilators are in use, and the dead are piling up at crematoriums and graveyards.

HOW DID WE GET HERE?

Authorities were lulled into believing the worst was behind them when cases started to recede in September.

Cases dipped for 30 consecutive weeks before starting to rise in mid-February, and experts say the country failed to seize the opportunity to augment healthcare infrastructure and aggressively vaccinate.

“We were so close to success,” said Bhramar Mukherjee, a biostatistician at the University of Michigan who has been tracking India’s pandemic.

Despite warnings and advice that precautions were needed, authorities were unprepared for the magnitude of the surge, said K Srinath Reddy, president of the Public Health Foundation of India.

Critics have pointed to the government deciding to not pause Hindu religious festivals or elections, and experts say that these may have exacerbated the surge.

“Authorities across India, without exception, put public health priorities on the back burner,” Reddy said.

India’s top health official Rajesh Bhushan would not speculate April 21 why authorities could have been better prepared, saying: “Today is not the time to go into why did we miss, or did we miss, did we prepare?”

WHY IS INDIA’S HEALTH SYSTEM COLLAPSING?

India only spends a fraction of its gross domestic product on its health system, lower than most major economies.

But authorities didn’t take a long-term view of the pandemic, said Dr. Vineeta Bal, who studies immune systems at the Indian Institute of Science Education and Research in Pune city.

Suggestions for permanent improvements like adding capacity to existing hospitals or hiring more epidemiologists to help track the virus were widely ignored, she said. Now authorities are scrambling to resuscitate many emergency measures that had been ended once the numbers fell.

A year ago, India was able to avoid the shortages of medical oxygen that plagued Latin America and Africa after it converted industrial oxygen manufacturing systems into a medical-grade network.

But many facilities went back to supplying oxygen to industries and now several Indian states face such shortages that the Health Ministry has urged hospitals to implement rationing.

The government in October began building new plants to produce medical oxygen, but now, some six months later, it remains unclear whether any have come on line, with the Health Ministry saying they were being “closely reviewed for early completion.”

Tanks of oxygen are being shuttled across the country to hotspots to keep up with the demand, and several state governments have alleged that many have been intercepted by other states en route to be used to meet local needs.

India is faced with the massive challenge of trying to prevent its health care system from further collapse until enough people can be vaccinated to significantly reduce the flow of patients.

The good news is that India is a major vaccine producer, but even after halting large exports of vaccines in March to divert them to domestic use, there are still questions of whether manufactures can produce enough fast enough.

“Vaccination is one way to slow down the spread — but this really depends on the speed and availability of the shots,” said Reddy of the Public Health Foundation.

Already several states have said they have shortages in vaccines — although the federal government denies it.

India said last week it would allow the use of all COVID-19 shots that have been greenlit by the World Health Organization or regulators in the United States, Europe, Britain or Japan.

On April 19, it said it would soon expand its vaccination program from people aged 45 to include all adults, some 900 million people — well more than the entire population of the entire European Union and United States combined.

Meanwhile, Reddy said some states have had to implement new lockdowns but long-term, it was up to individuals as well to do their part.

“As a society, it’s crucial that we maintain public health measures like masking, physical distancing and avoiding crowds,” he said.