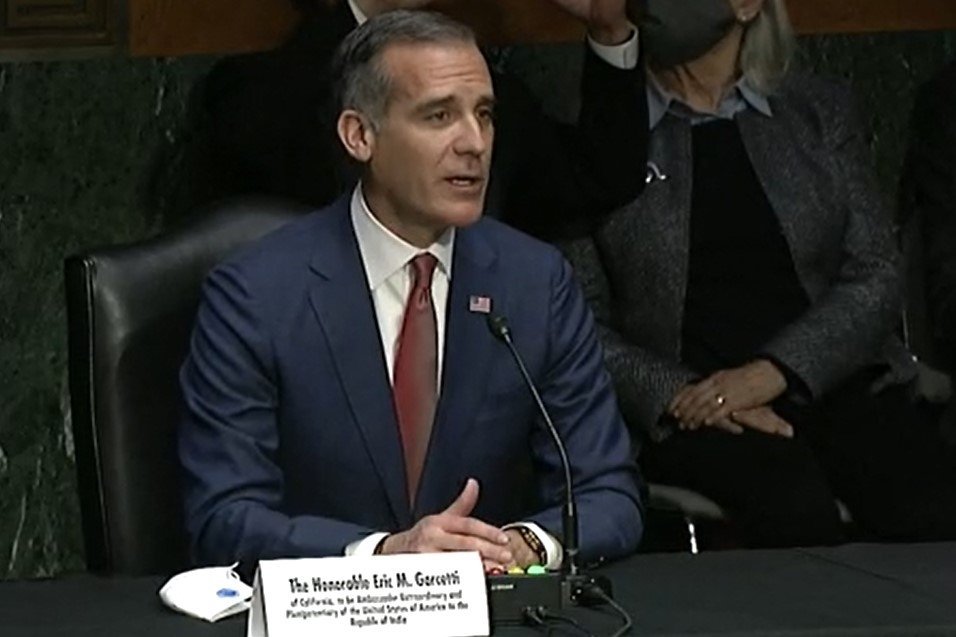 WASHINGTON, DC (IANS) – President Joe Biden is standing by Eric Garcetti whose nomination to be the Ambassador to India has hit a roadblock at the Senate, according to a White House official.

“The President has confidence in Mayor Garcetti (and) he believes he will be an excellent representative in India,” White House Communications Director Kate Bedingfield said on Mar.30.

Two Republican Senators have blocked the Senate from voting on the nomination of Garcetti, who is the mayor of Los Angeles, over allegations that he knew about reports of sexual harassment by a former senior staff member and advisor but failed to act.

And some Democrats are ambivalent about backing him in the Senate which has to approve appointments of Ambassadors.

Garcetti’s nomination was approved by the Senate Foreign Relations committee which held a hearing in Dec. 2021 on his nomination and heard his testimony and questioned him.

Meanwhile with several crises, Afghanistan and Ukraine among them, buffeting US foreign policy, the ambassadorship in New Delhi remains vacant.

“I think our country deeply feels that right now — and the importance of having someone on the ground in India.”

The US has been uneasy about India not voting at the UN to condemn Russia’s invasion of Ukraine and its plans to buy cheap oil from Moscow.

Earlier this month the full Senate approved the nomination of career diplomat Donald Blome to be the Ambassador to Pakistan.

The Foreign Relations Committee had approved his nomination at the same time as Garcetti’s.

The highly partisan Senate is evenly split between the Democrats and the Republicans, and he would need the support of every Democrat along with the tie-breaking vote of Vice President Kamala Harris unless some Republicans come to his rescue.

Politico said that Democrat Senator Kyrsten Sinema “has offered doubts” and according to her spokesperson, she was “doing due diligence” on him.

The allegations against Garcetti arise from a case filed by a policeman against the city.

The policeman has charged in the suit that Garcetti’s former advisor and senior staffer Rick Jacobs had harassed him while he was in Garcetti’s security detail.

Garcetti was asked about it when he appeared before the Senate Foreign Relations Committee and he had denied knowing about the allegations against Jacobs.

Republican Senator Chuck Grassley, who put a hold on Garcetti’s nomination is conducting an investigation into allegations of misconduct against Jacobs and if the mayor had known about them.

Grassley told The Los Angeles Times he didn’t have a definite date when the probe would be completed and that it could be after the Senate recess which ends on Apr. 25.

The newspaper said that some other staff in Garcetti’s office had also made allegations against Jacobs.

Some of the senators are waiting for the outcome of the probe before deciding if they should vote for Garcetti, according to media reports.

Democrat Senator Mazie Hirono told the Los Angeles Times” “I understand that he testified he didn’t know anything about it. I’d just like to get further corroboration on that situation.”

But Democrat Senator Jeanne Shaheen, who questioned Garcetti about the allegations during his confirmation hearing, told the newspaper that she was “satisfied” with his assertion that he was unaware of Jacobs’ behavior.

Republican Senator Joni Ernst has said that she will also be placing a hold on the nomination.

Politico said that a State Department staffer had met with key aides of Democratic senators in a bid to propel the nomination.

According to Politico, the staffer told them that “it was imperative that Garcetti be confirmed soon to help engage India in addressing Russian aggression”.