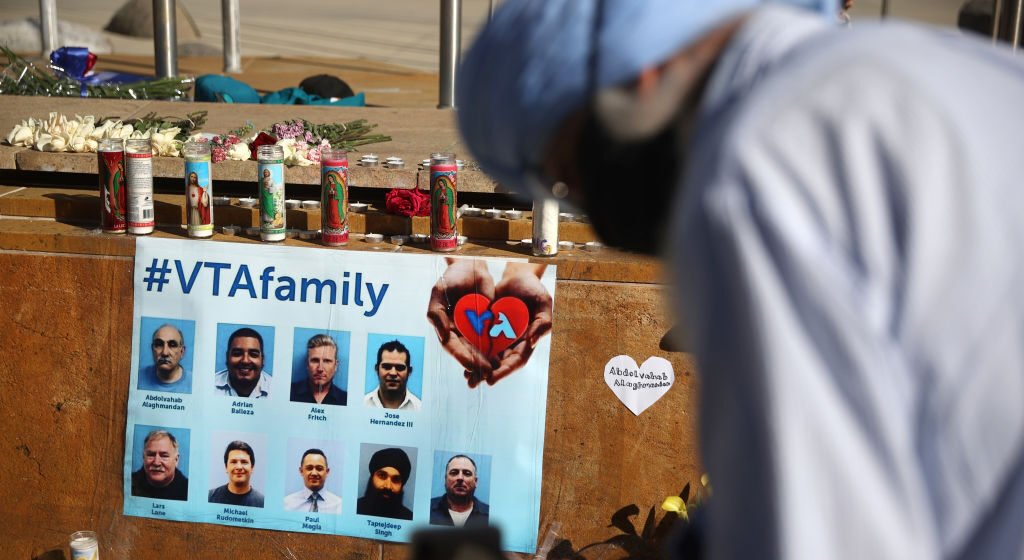 A mourner pauses in front of a memorial for the nine victims of a shooting at the Santa Clara Valley Transportation Authority light rail yard on May 27, 2021 in San Jose, California. (Justin Sullivan/Getty Images)

Viewings were held June 3 and June 4 at the Fremont Gurdwara in Fremont, with funeral and memorial services held June 5.

The family of Singh were joined by another 250 mourners at the June 5 memorial, according to a San Francisco Chronicle report.

The evening before, Singh’s friends and loved ones embraced each other, wept and sang Sikh devotional songs in a chapel hall in Union City, the report said.

The publication noted that as loved ones gathered to remember Singh and mourn his senseless killing, haunting questions remain. Foremost among them: Could more have been done to prevent the devastating losses, and how can those left behind overcome their pain?

On May 26, Singh, a VTA light-rail operator, spent his final moments trying to keep his colleagues safe, according to family, friends and co-workers. Once the shooting began at the railyard, he ran through the building, helping at least one woman hide and warning others of the gunman before he was shot to death, the report said.

“He called to tell me about the shooting and to run and hide,” co-worker Gurvinder Singh said before the June 4 viewing, according to the report. “He was on a different floor, and he led us away from where he was. I’m here today because of him. There’s no way else to put it.”

The last thing Gurvinder remembers telling Taptejdeep was, “Please, you go hide too.”

But the 36-year-old didn’t. Along with supervisor Paul Delacruz Megia, 42, he tried to save as many of his colleagues as possible before eventually coming face to face with the killer, according to the Chronicle.

Singh was the main provider for his family and his elderly parents. The family organized a fundraiser to help his dependents, the report said. At total of $446,591 has been raised.

Singh is survived by his wife, Harmanpreet Kaur, and children, a 1-year-old daughter and 3-year-old son, family members said.