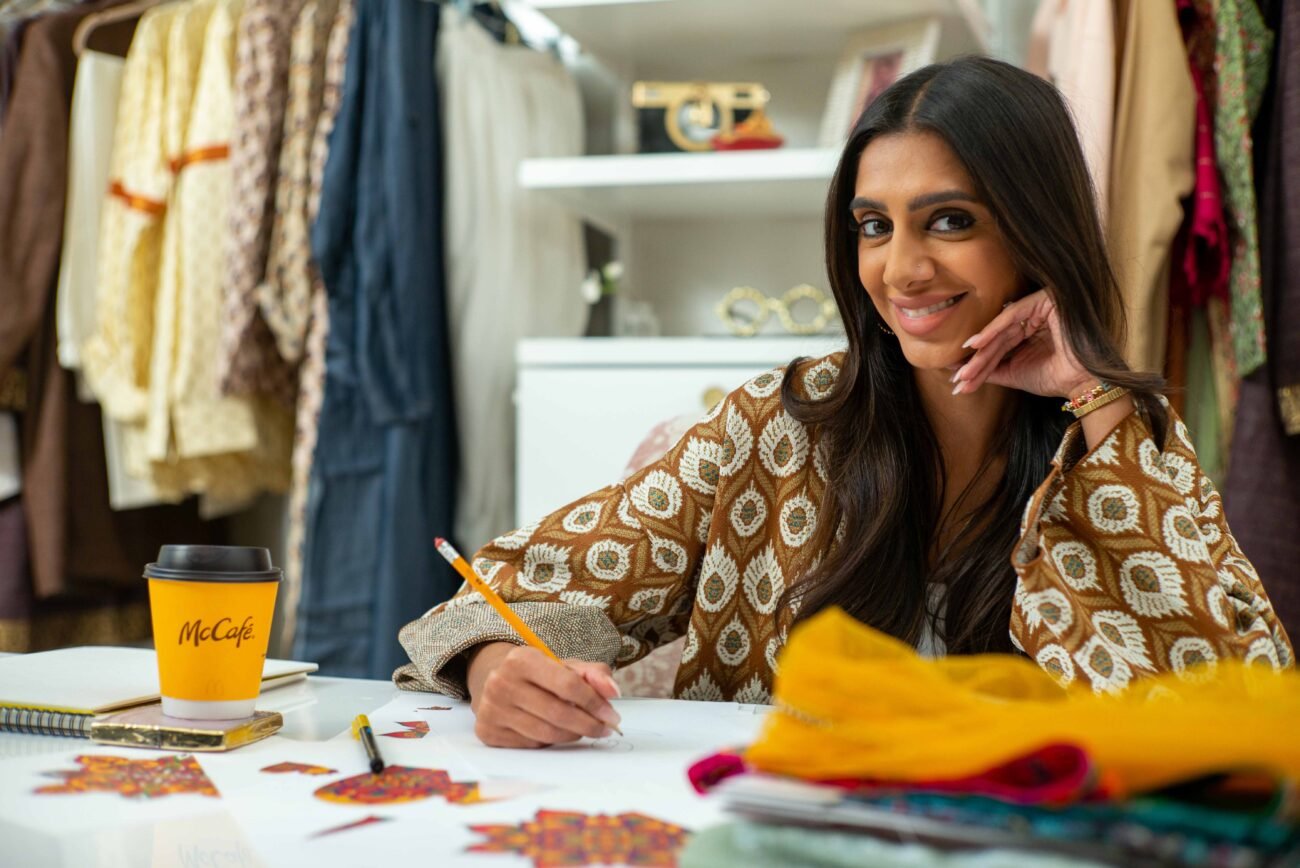 Like many first-generation Indian Americans, fashion designer Megha Rao grew up celebrating Diwali, the Festival of Lights, at home but hardly ever saw it being acknowledged outside of her community. But today, as many brands and retailers across the U.S. step up to cater to the community, that landscape is rapidly shifting, and Rao is “honored” to be a part of the change.

In the run-up to the festival, McDonald’s and Rao teamed up to create a one-of-its-kind experience. The fast-food giant welcomed its patrons with a first-ever Diwali drive-thru experience featuring traditional rangoli designs made by Rao.

During the five days of Diwali, at select locations in Illinois, Texas, and Virginia, the drive-thru areas were immersed in vibrant hues, bringing high festive energy into the space.

Rao told India-West that McDonald’s and Diwali were an integral part of her childhood and to be able to now celebrate this festival with her friends, family and community via this collaboration was both an honor and a full-circle moment.

“One of my favorite memories growing up was grabbing McDonald’s world-famous fries, a hot fudge sundae and a coke after dance class every Saturday with my mother, a tradition I’ve continued with my own children,” Rao said. “When this experience to partner with such a global and inclusive brand like McDonald’s for Diwali came about, the very first thought I had was 5-year-old Megha and the emotions she would feel as a young girl seeing one of our most treasured holidays being celebrated on this large scale in such a beautiful and grand way.”

Customers also received a rangoli coloring page and crayons to customize their own art while learning more about the holiday. Each location was selected based on its high Indian American population and proximity to local Diwali celebrations.

For those who were unable to witness the in-person celebrations, McDonald’s created a Diwali AR lens on Snapchat and Instagram. The filter simulated a virtual tunnel of lights with vivid rangoli designs that could be shared with friends and family.

The program, according to McDonald’s, intended to not only celebrate the festival with the Indian American community but also educate others about its cultural traditions.

Rao, the founder of HoliChic, a fashion label that can be best described as an amalgamation of Indian culture and western sensibilities, noted that she looks forward to celebrating the festival every year while keeping to traditions preserved over the years.

She added that she drew upon her own experiences and feelings to find inspiration for her designs.

“The colorful heart-shaped rangoli illustration I created for McDonald’s is a playful representation of love for family and Diwali,” she told India-West. “I also wanted to instill the core values and aspects of Indian culture that I learned from my mother, so within the designs I utilized colors that carry significant meanings to our community – such as red to symbolize excitement and love or saffron to represent courage and wisdom.”

Rao’s post about the collaboration received widespread love on Instagram. Seeing their culture and traditions embraced in this fashion was a surreal moment for many and prompted emotional reactions, with many noting that this sends a message about the importance of representation and feeling represented is empowering.

“Little me feels seen,” commented one follower, while another user chimed in: “Never thought I’d see it.”

Several users called this “monumental” for future generations while for others, it evoked feelings of nostalgia, with one follower commenting: “This makes my inner child so, so happy.”