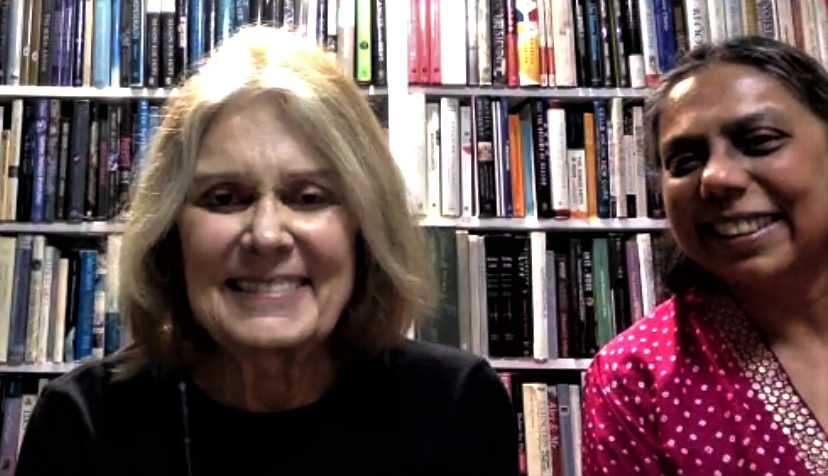 Feminist icon Gloria Steinem was the keynote speaker Oct. 10 evening at Apne Aap’s “The Last Girl” awards ceremony and Covid-19 relief fundraiser, which raised more than $42,000 to fight against the sex trafficking of women and girls, and also to provide meals to low-income people in India, whose livelihoods were cut short by the Covid-19 pandemic lockdown.

Amid the pandemic, Apne Aap distributed 15 million meals to low-income families through its 1 Million Meals program. The organization started with 800 families in March 2020 and quickly grew to serve 123,000 families, and 253,773 children. British actress Reshma Shetty, who moderated the event, noted that this year’s awards focused on food security.

This year’s honorees were: Swanee Hunt, a philanthropist who served as the U.S. Ambassador to Austria during former President Bill Clinton’s administration; noted feminist Catharine MacKinnon; Grizelda Grootbroom, a victim of sex trafficking and the author of Exit; Basu Ratnam, CEO of INDAY, a group of Ayurvedic-inspired restaurants in New York who led multiple food brands to join forces for Covid relief to India; and the late chef Floyd Cardoz of Tabla and Bombay Bread Bar, who died from Covid last year. His wife Barkha has helped many vulnerable populations impacted by Covid, to access food in India.

Apne Aap board member Vinita Sud Belani presented the award to Ratnam. “Basu opened up his kitchens to us during the worst of the pandemic,” she said.

“These are strange and difficult times for so many people, who are locked in situations of despair,” said Ratnam, as he received the honor. During a robust pledge drive, Ratnam emerged another winner, scooping up a Lake Tahoe home for a 7-day vacation.

Each year 1.4 million girls are sold into sex trafficking. Apne Aap estimates that one out of every 250 girls around the world is trafficked for sex.

Apne Aap was founded in 2002 by Indian American journalist Ruchira Gupta, who exposed the trafficking of women and girls in India and Nepal, in her Emmy-award winning documentary “The Selling of Innocents.”

Gupta founded the organization with 22 women living in a red-light district in Mumbai. The organization aims to empower women and girls involved in the sex industry, and provide them alternate livelihoods.

“Body invasion on a daily basis is not a great way to make a living. It is not dignified labor: the body is literally consumed,” said Steinem at the ceremony, which was held virtually this year, in keeping with Covid-19 protocols, which discourage large gatherings, especially indoors.

“We cannot criminalize the people who are forced to do this,” said Steinem, one of the most prominent spokespersons for the women’s liberation movement in the 1960s and 70s. The co-founder of Ms. Magazine lived in India for two years in the 1950s, and said she considers the country her second home.

In response to a question from India-West, Steinem said she had never seen consensual sex in the industry, despite current attempts to dignify the trade in a positive light.

In a conversation with actress Ashley Judd, MacKinnon noted that children, mostly girls, enter the trade fairly early in life, often fleeing sexual abuse in their homes. Others are daughters of women in the sex industry.

“Sex is forced by people with power on to people who have no power,” she said.

“People say ‘if it’s a choice, it’s all right, but what is the back story?’” queried Gupta.

The pandemic exacerbated conditions for women and girls living in brothels, said Gupta. “When they are at school, girls are able to study and they are safe from male predators. But when schools shut down, girls must return to their homes in red light districts.”

“The government has done nothing to protect these girls,” stated Gupta, adding that the Modi administration’s response to the pandemic has been a “failure of leadership.”

Apne Aap aims to offer women and girls an alternative to prostitution, via its “10×10 Organizing for Independence” methodology. The organization provides its clients with a safe space; education; self-confidence; political power; government authorized identification and subsidies for low-cost food, housing, health care and loans; legal support to file police complaints and testify in court; savings and bank accounts; linkages to vocational training, markets, and jobs; and membership in a self-empowerment group.

Twenty percent of Apne Aap’s work is to create exit strategies for girls and women who are victims of prostitution, known as rehabilitation and reintegration. The remaining 80 percent strives to prevent inter-generational prostitution among the daughters of women in prostitution and caste discrimination.

“The last girl is the most-marginalized girl. By supporting her and her family, we hope they support her,” said Gupta.