HomeGlobalFilm Review: In ‘The Green Knight,’ An Enchanting Arthurian Dream 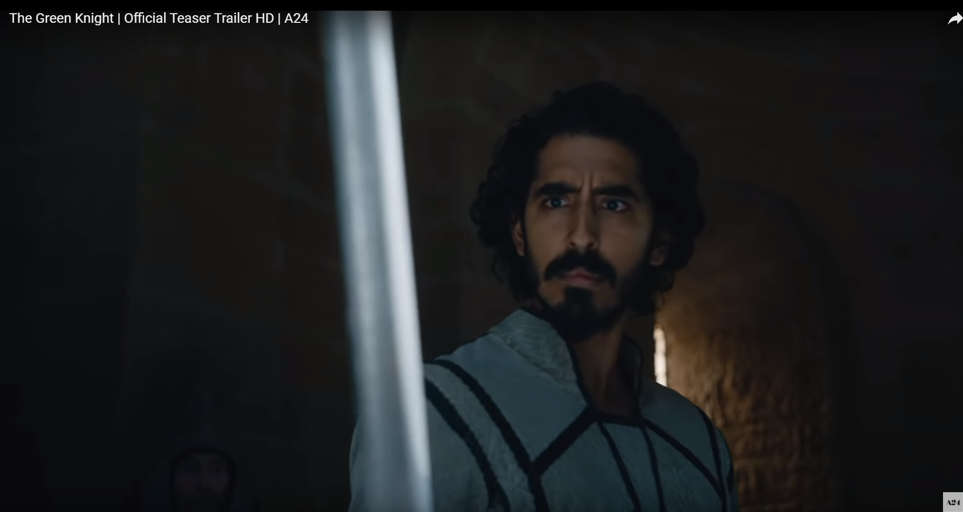 Why, for starters, is the Green Knight green?

It’s a question that’s long vexed scholars of the 14th century chivalric romance “Sir Gawain and the Green Knight.” The movie, like the epic poem, is full of mysteries, most of them unspoken. But the knight’s unlikely color – Why isn’t he a more typical knightly blue? – is a question voiced by the characters of David Lowery’s adaptation, “The Green Knight.” He’s green, answers Dev Patel’s Sir Gawain, because it’s the shade of rot.

The Green Knight, as seen in Lowery’s enchanting Arthurian dream, is an imposing tree of a man, with a wispy beard of twigs and a wooden mane whose movements rustle with the sound of bended, creaking branches. (He’s played by a much-costumed Ralph Ineson.) Early in “The Green Knight,” he rides on Christmas Day into King Arthur’s court, cloaked in shadow, and offers a game. Strike him wherever you want, and he will repay the same stroke a year hence at his Green Chapel.

Gawain, freshly inspired by King Arthur to be ambitious after spending his days drinking and carousing, takes up the challenge and boldly chops off the knight’s head. The thrall of victory quickly turns ominous when the Green Knight stands, picks up his head and – with more menace than even an unwanted houseguest promising to return for the holidays – says he’ll see the young man next Christmas.

The Green Knight is the color of nature and of death, which here are the same things. Lowery’s film, shot on misty Irish plains and dank forests, is earthy, with dirt under its nails, and blanketed in wintery fog. It’s both of the land and the ether, poised in a dreamy, mythical long ago. Gawain’s quest to visit the Green Knight a year later is a haunting journey into an inescapable abyss, a meditation on life and death made with the Green Knight’s axe looming.

Lowery, the Texas filmmaker, has a propensity for lyrical legends (“The Old Man and the Gun,” with Robert Redford ) and existential rumination (“A Ghost Story”). The latter is a kind of companion piece to “The Green Knight,” and both, I think, sometimes use obliqueness to mask an inner vagueness. But few American filmmakers of his generation have been quite as keen to pursue difficult philosophical questions or to stretch cinema in new, quixotic directions.

Just making a movie out of this anonymous, alliterative poem is a wild kind of feat. A tale of chivalry and honor, it belongs to another, medieval world. Its lessons and meanings are somewhat inscrutable and much contested. Only twice before has it been turned into a movie (both by British filmmaker Stephen Weeks, once with Sean Connery as the Green Knight, neither to any acclaim). In King Arthur’s Round Table, Gawain is quite notable but he’s no Lancelot.

But in Patel’s brooding, uncontrived performance, Gawain is remarkably alive as a man – like Patel’s David Copperfield – figuring himself out. Lowery opens “The Green Knight” (which a24 opens in theaters July 30) with ornate titles crediting the tale’s historic origins – this is a story about stories – but immediately situates “The Green Knight” into a more natural realm and the intimate orbit of Patel’s Gawain.

Gawain has none of the experience of Camelot’s more famous knights but that’s not causing him to lose any sleep. He and Essel (a marvelous, pixie-cut Alicia Vikander) are inseparable, in bed and at Mass. Living with his mother, Morgana (Sarita Choudhury), Gawain is a little like a boy prince who doesn’t want to grow up.

But after King Arthur (Sean Harris) summons him to sit alongside his throne, Gawain haphazardly throws himself into the pursuit of honor, joining the Green Knight’s game. Is he finally reaching maturity? Or is it a fool’s gambit to risk everything for Round Table infamy? “This is how silly men perish,” says Essel.

But Gawain, grimacing at the first sight of snowfall, sets out just the same to make his Christmas appointment with the Green Knight. He traverses a deathly landscape in an episodic journey of symbolic encounters – a thief on a battlefield (Barry Keoghan); an apparition in a deserted house (Erin Kellyman); a kindly fox; a comforting castle with a lord and a mystical companion (Joel Edgerton, Vikander again).

The chapters don’t cohere in a sustained rhythm, but in richly evocative imagery, “The Green Knight” makes its own vivid film language and pacing. Sometimes, Lowery’s camera turns round like a clock, advancing and reversing time. Gawain’s quest turns abstract, awakening him to his life even as he marches to his own death.

“The Green Knight,” an a24 release, is rated R by the Motion Picture Association of America for violence, some sexuality and graphic nudity. Running time: 125 minutes. Three stars out of four.