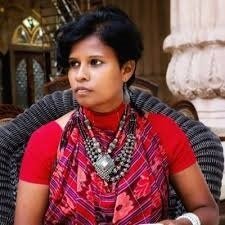 RANCHI, (IANS) – Jacinta Kerketta, a poet, writer, and freelance journalist in Jharkhand, has been named in Forbes’ list of ‘Self-Made Women.’

Kerketta, who belongs to the Oraon tribe, hails from a village near Khudpos in West Singhbhum district of Jharkhand.

For her contributions to contemporary Hindi literature, she has already won several national as well as international awards.

Born in 1983, Kerketta’s literary works, focusing mainly on water, forests, soil, and Adivasi issues, have received attention all around the world.

She is Jharkhand’s first-ever Adivasi poetess whose poems have been published in three languages in the international arena.

She has also recited poems at universities in Italy, Germany, France, and Australia.

Presenting the list of women, Forbes India said on its website that the compilation features women who are breaking stereotypes, dismissing doubters, and leading change.