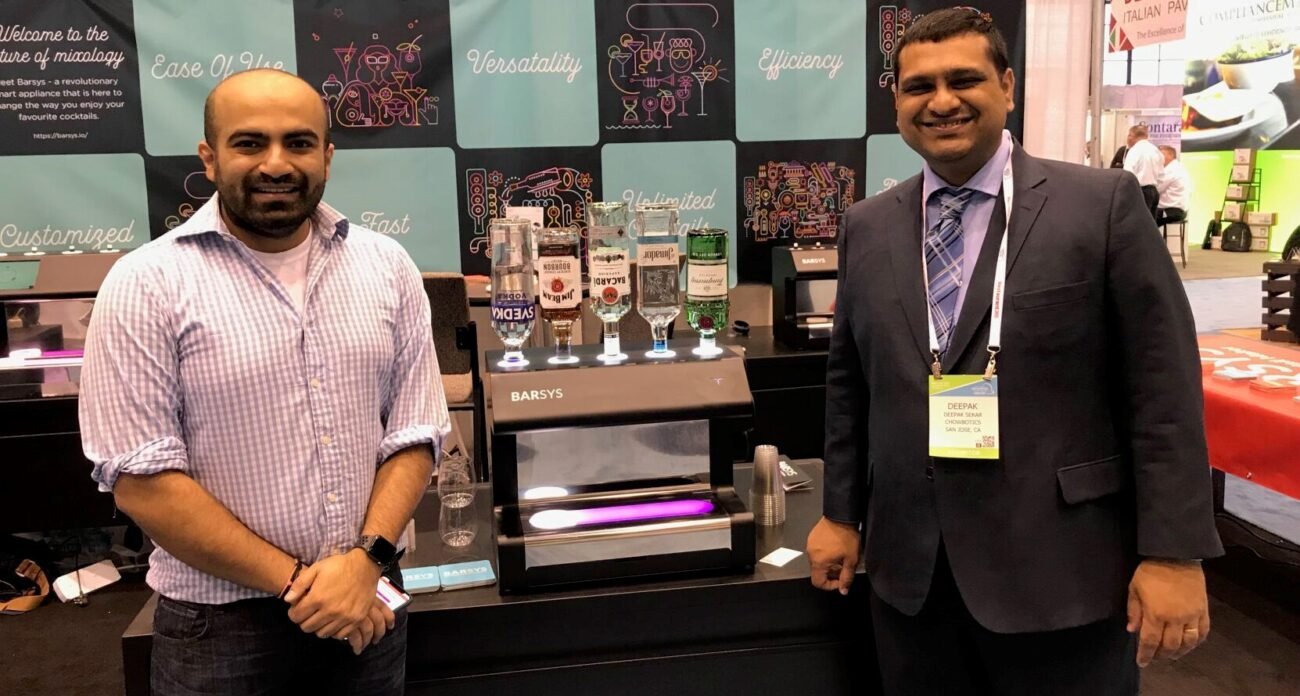 Deepak Sekar founded Chowbotics, a food prep company that makes a refrigerator-sized robot called Sally, which prepares salads and other meals. The Indian American entrepreneur (right) is seen with Akshet Tewari, CEO of Barsys, which has a line of automated cocktail makers. (chowbotics.com photo)

The purchase of the seven-year old company founded by Deepak Sekar promises to help DoorDash expand its fresh meal offerings, according to reports.

Chowbotics makes a refrigerator-sized robot called Sally that can store up to 22 prepared ingredients. Sally uses those ingredients to make up to 65 salads, bowls and other meals at a time, a Feb. 11 Associated Press report said.

Prior to this year, Chowbotics had sold around 125 of its $35,000 robots, mostly to universities, medical centers and grocery stores. But the company said sales jumped during the pandemic as customers looked for touch-free ways to dispense food, the AP report said.

DoorDash said Chowbotics’ robots could allow its restaurant partners to offer more varieties of meals without having to expand their kitchen space. Other DoorDash merchants, like convenience stores, could also use it to expand into fresh food.

Chowbotics CEO Rick Wilmer – who took over for Sekar in October 2019 in a shuffle that moved the founder to president – said DoorDash’s reach will help his company grow.

DoorDash offers delivery from 390,000 merchants in the U.S., Canada and Australia and is the food delivery market leader in the U.S., the AP report notes.

DoorDash said Chowbotics’ staff are now DoorDash employees. But otherwise, Chowbotics will continue to operate independently and has no plans to change its name.

Chowbotics introduced the industry’s first fresh food making robots. There are now 100-plus Chowbotics robots around the world. Under his leadership, Fast Company named Chowbotics one of the world’s most innovative companies.

Sekar is an inventor with 150 issued patents, of which a dozen are used in every major smartphone.

He received his B. Tech from IIT Madras and his M.S. and Ph.D. from Georgia Tech.

When he’s not working on tech, he enjoys mountain climbing and working with Asha, a non-profit educating underprivileged children in India, his bio on his personal website notes.