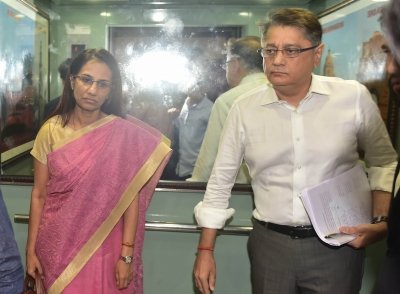 NEW DELHI (IANS) – Former ICICI Bank CEO Chanda Kochhar and her husband and businessman Deepak Kochhar were on December 23 arrested by the CBI in connection with a loan fraud case involving bank officials and the Videocon Group.

A senior Central Bureau of Investigation official said that the arrests were made from Delhi whereas the fraud FIR was filed with its Mumbai branch in January 2019 against Kochhar, her husband, and Venugopal Dhoot of Videocon Group.
Nupower Renewables, Supreme Energy, Videocon International Electronics Ltd and Videocon Industries Ltd were also named as an accused in the FIR.
Dhoot allegedly invested crores of rupees in Nupower, months after the Videocon Group got Rs 3,250 crore as loan from ICICI Bank in 2012.
The CBI official said that they will produce Kochhar and her husband before a court and will seek their custodial remand.
“We have also conducted search operations at their premises and have recovered a few documents connected to the case.”