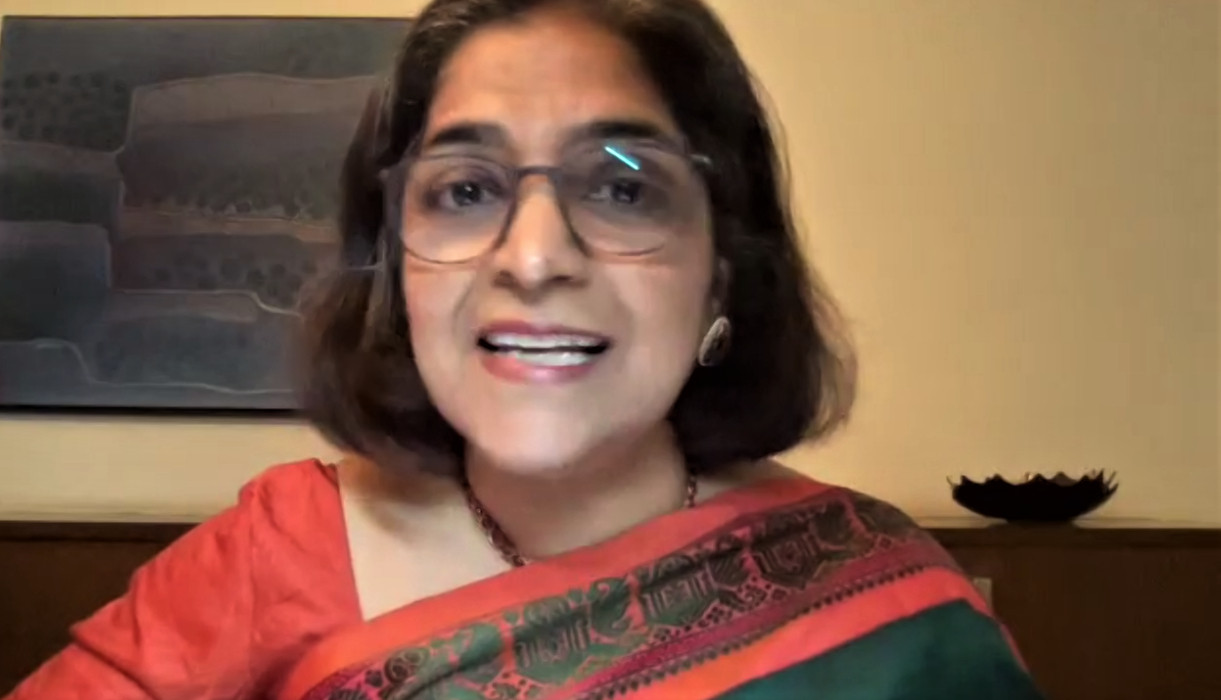 Sudha Kidao (above), managing trustee of the Foundation For Excellence India Trust, spoke Oct. 10 evening at the Foundation For Excellence “Journey of a Scholar” virtual event. Indian American entrepreneur Prabhu Goel, who founded FFE in 1994 with his wife Poonam, noted at the event that FFE was the sole organization partnering with Amazon for the Future Engineer program in India. (Sunita Sohrabji/Zoom screen grab)

The Foundation For Excellence hosted its “Journey of a Scholar” event Oct. 10 evening virtually, highlighting alumni who were benefited by the organization’s scholarship program.

The organization also announced its partnership with Amazon’s “Future Engineers” initiative to fulfill the United Nations Sustainable Development Goal 4, which aims to “ensure inclusive and equitable quality education and promote lifelong learning opportunities for all.” FFE scholars are usually the first in their families to attend college, and come from underserved, and economically constrained backgrounds.

“The AFE- FFE Scholarship program aims to transform the lives of academically gifted and financially needy students, preferably girls, from all over India by enabling access and support of engineering, computer science and related professional education,” noted FFE in a press release. “Apart from the financial and other assistance provided to the AFE India Scholars, Amazon will also provide mentorship, skill building opportunities and networking opportunities along with a chance to appear for an Amazon internship.

“This scholarship will propel you to a successful professional career in a single generation, lifting your families out of the poverty cycle,” noted FFE.

Indian American entrepreneur Prabhu Goel, who founded FFE in 1994 with his wife Poonam, noted at the event that FFE was the sole organization partnering with Amazon for the Future Engineer program in India. The program will allow scholars to get exposure to Amazon, collaborate on technology via hackathons and interactions with technology teams.

Last year, amid the Covid-19 pandemic, FFE funded the college educations of 7,498 academically-gifted low income students in India. Since its inception in 1994, the organization has distributed 71,300 scholarships worth $32 million to 24,800 students, who are usually funded through their entire college education.

Last year, FFE expanded its scholarship program to include law and B. Pharm students. Currently, approximately 23 percent of scholarship recipients are women. “We would like to move that needle to include more women,” said Sudha Kidao, managing trustee of the Foundation For Excellence India Trust.

“FFE brings about the transformation of lives through scholarships,” said Kidao, noting that the organization currently partners with 40 corporations and 1,500 volunteers in the U.S. and India.

FFE previously focused solely on medical and engineering students. Goel explained at the event that funding an engineering or medical student is a great return on investment. “An engineer makes $10,000 a year in India, which is 100 times return on our investment. He then supports his siblings’ education, becomes a role model in the community, and pledges to support two FFE scholars in his lifetime, so that we eventually create a self-funding organization.”

A $700 donation supports an FFE scholar for an entire year, including tuition, books, and room and board; $2,800 supports the complete undergraduate education of an engineering student; while $3,500 supports a student’s four-year MBBS studies.

One hundred percent of donor dollars go directly to students: the Goels fund the administrative costs of the program.

FFE supplements the scholarship with a mentoring program, as well as equipping its scholars with soft skills, including employability and technical skills.

“This is unique to FFE and assistance beyond Scholarship Support ensures that graduating students have a well-rounded education, including life and career readiness skills, beyond the regular academic curriculum,” the organization noted on its Web site.

Several FFE scholars were highlighted at the virtual event, including Khusboo Verma, a third year engineering student, who is the first person in her family and her village who is attending college. Verma’s father is the only worker for the family of eight. During her first semester, he borrowed money from relatives to pay for his daughter’s tuition, but was worried about how to pay for the next semesters.

Verma then learned about the FFE program, applied, and got a scholarship that will take her through graduation. “We will never have to worry about paying college fees again,” she said, adding: “One day, I hope to help other students like me.”