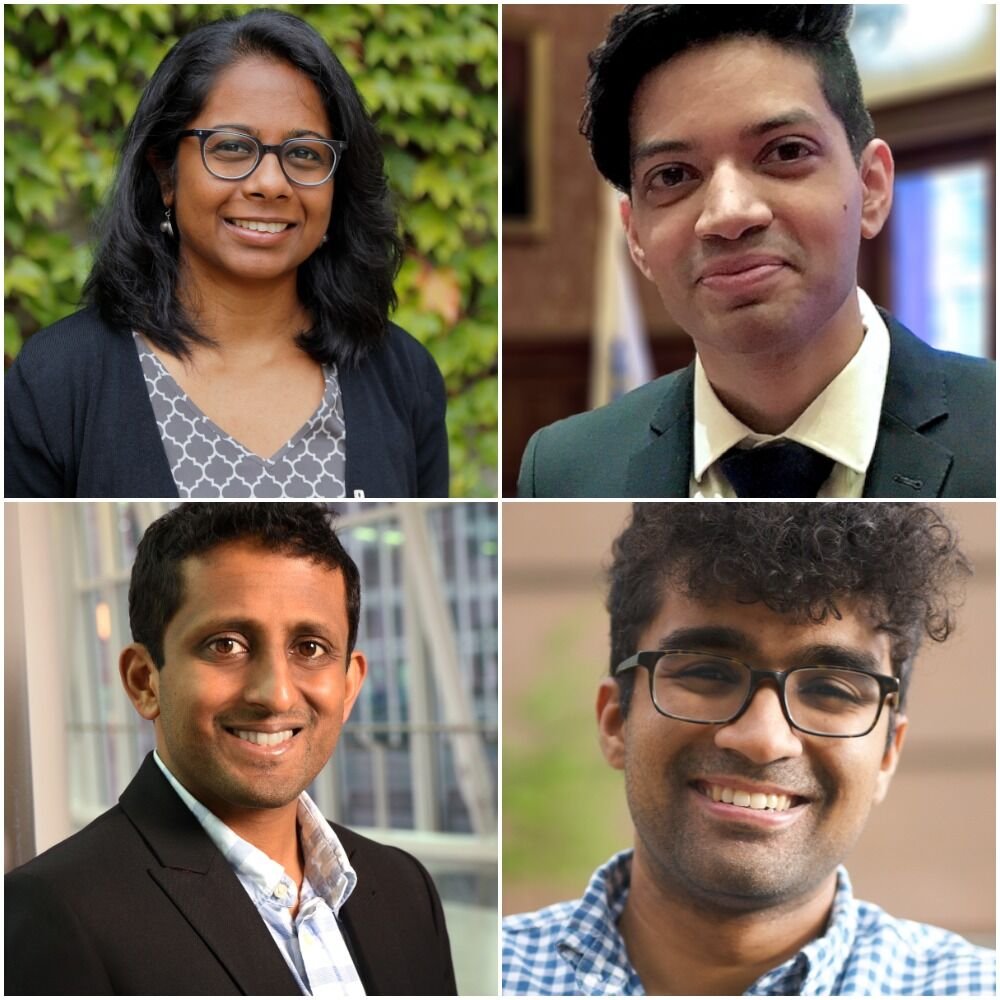 Four Indian Americans have received the National Institute of Health Director’s New Innovator awards, a program created in 2007 to accelerate the pace of biomedical, behavioral and social science discoveries. Clockwise from top left: Swetha Murthy, of the Vollum Institute at Oregon Health and Science University; Nikhil Sharma, of Columbia University; Vijay Ramani of the University of California, San Francisco; and Chethan Pandarinath of Emory University and the Georgia Institute of Technology. (photos courtesy of the NIH)

The $1.5 million award is given to early-stage investigators, defined as those who are within 10 years of completing their terminal research degree or postgraduate clinical training and who have not yet received substantial NIH support. The award is given in the first year of a 5-year project.

“The program seeks to identify scientists with high-impact ideas that may be risky or at a stage too early to fare well in the traditional peer review process. The program encourages creative, outside-the-box thinkers to pursue exciting and innovative ideas in any area of biomedical, behavioral or social science research relevant to the NIH mission,” noted the organization in a press statement.

The 2021 Indian American grantees are: Swetha Murthy, of the Vollum Institute at Oregon Health and Science University; Chethan Pandarinath of Emory University and the Georgia Institute of Technology; Vijay Ramani of the University of California, San Francisco; and Nikhil Sharma, of Columbia University.

The Bangalore University alumnus received her Ph.D. in biochemistry from the State University of New York, Buffalo in 2012. She studied gating mechanism of N-methyl-D-aspartate receptors for her doctoral research, and then trained as a postdoctoral fellow at Scripps Research where she studied the function and physiology of mechanically activated ion channels, PIEZOs.

Murthy joined the Vollum Institute as Assistant Scientist/Professor in 2019.

Pandarinath’s research focus on artificial intelligence to study neural computation and to improve the performance and robustness of brain-machine interfaces. His project is titled: “Fusing Motor Neuroscience and Artificial Intelligence to Create Next-Generation Neural Prostheses.”

The assistant professor in biomedical engineering and neurosurgery at Emory University and Georgia Tech is also the recipient of an Alfred P. Sloan Research Fellowship in Neuroscience and a K12 Rehabilitation Engineering Research Career Development Fellowship.

Pandarinath received bachelors’ degrees in computer engineering, physics, and science policy at North Carolina State University, followed by a Ph.D. in electrical engineering at Cornell University, with a focus on information processing and neural coding in the visual system. He then did a postdoctoral fellowship at Stanford University, where he developed high-performing brain-controlled assistive devices for people with paralysis, with support by a fellowship from the Craig H. Neilsen Foundation.

Ramani is currently a Sandler Faculty Fellow in UCSF’s Department of Biochemistry and Biophysics, and is an incoming assistant investigator at the Gladstone Institute for Data Science and Biotechnology. He received his B.S.E. in chemical & biological engineering from Princeton University, and a Ph.D. in genome sciences from the University of Washington. After completing his Ph.D. in the lab of Dr. Jay Shendure, Vijay accepted a UCSF Sandler Faculty Fellowship to begin his own independent research group in the Fall of 2018.

Sharma’s project is titled: “The Cellular and Molecular Mechanisms Underlying Nociception and Pain.” His lab at Columbia studies the cellular and molecular mechanisms that underlie pain.

Sharma is an assistant professor in the Department of Molecular Pharmacology and Therapeutics and the Department of Systems Biology. He received a B.A. in mathematics from Johns Hopkins University and a Ph.D. in molecular and cellular biology from Harvard University. Afterwards, Sharma worked as a management consultant for L.E.K. Consulting, followed by a postdoctoral fellowship in neurobiology at Harvard Medical School.