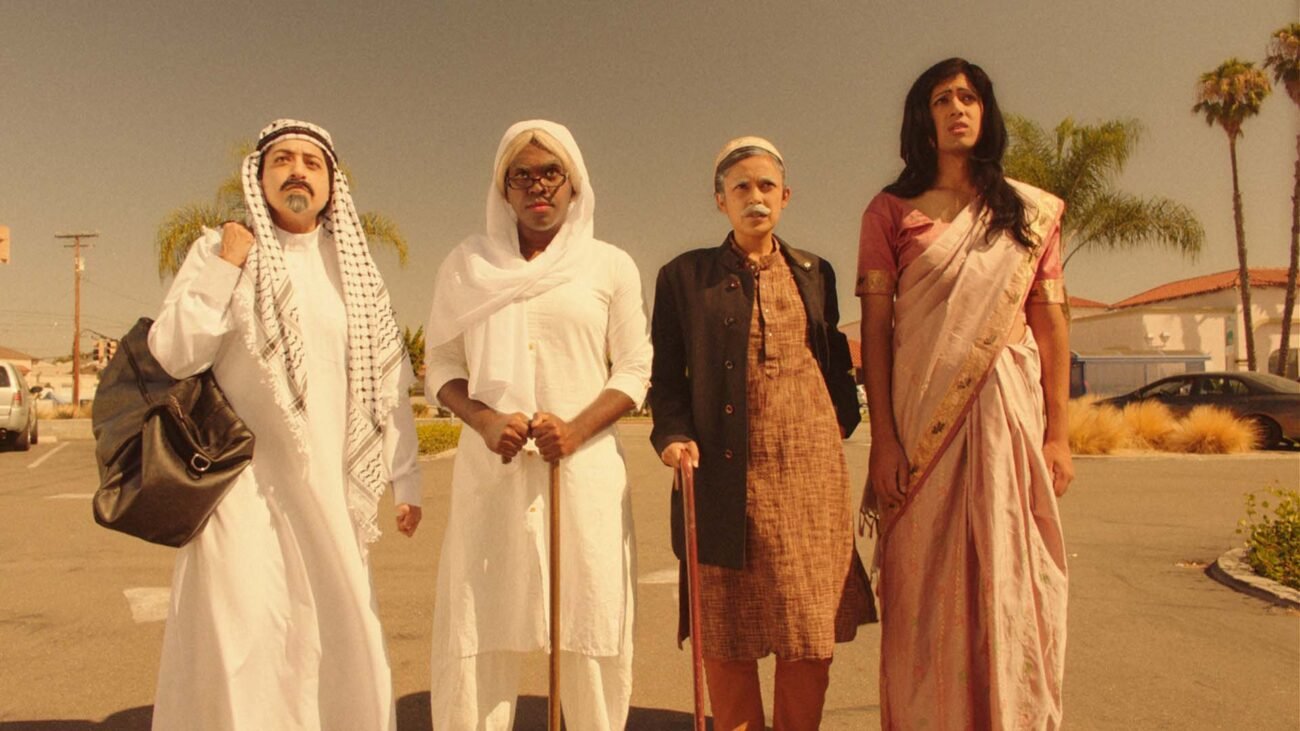 (L-R): Sonal Shah as Paru, Venk Potula as Vinny, Sharmita Bhattacharya as Anjali and Nirvan Patnaik as Zak in director Ravi Kapoor’s new film, “Four Samosas,” which will release in theaters and on-demand on December 2. (photos courtesy of IFC Films)

LOS ANGELES, CA – Just like samosas range in shape, size, and ingredients, the characters in Indian American director Ravi Kapoor’s new film – named after the delectable snack – take on different forms during its run time and are able to beguile fans at every turn. With an endearing storyline and a strong Indian American ensemble cast, led by Venk Potula, Kapoor is able to follow up his brilliant debut, “Miss India America,” with something equally remarkable.

Set in an area called Little India in Artesia, CA, “Four Samosas” begins with wanna-be rapper Vinny (Potula) – who employs his rapping skills to make sales pitches for sarees – learning about his ex-girlfriend Rina’s (Summer Bishil) wedding. To add insult to injury, she chooses poop-peddling entrepreneur and his arch-nemesis Sanjay, played by Karan Soni of “Deadpool” fame, over him.

Still nursing a broken heart and blaming the heartbreak for marring his confidence and creativity, Vinny attempts to disrupt Rina’s wedding by cobbling together a plan to break into her father’s (Tony Mirrcandani) grocery store and steal the jar of “dirty diamonds” meant for her dowry. Helping him in his endeavor is a motley crew comprising malcontent immigrant engineer Paru (Sonal Shah); Anjali, a resourceful newspaper editor but also a daydreamer (Sharmita Bhattacharya); and Bollywood aspirant Zak (Nirvan Patnaik), who is employed at the local Chaat House.

Will he be able to pull off this heist or will this act bring in more misery?

Kapoor, who was stuck in that typical filmmaker struggle of trying to get that second feature off the ground, eventually realized that he had compromised his voice trying to go bigger and more commercial. And so, he decided it was time to adhere to his creative instincts and to go local.

“I really wanted to make a film that leaned into a hyper theatrical style and that was fun and quirky, something that would express my off-the-wall sensibilities, and doing a heist film like ‘Four Samosas’ definitely allowed us to tick all of those boxes,” Kapoor told India-West.

As the film progresses, the quartet of friends, with their goofy nature, manage to charm their way into the viewer’s heart. Kapoor, on his part, has created a seamless mix of genres, moving deftly from the tried-and-tested heist genre to his own brand of humor, with romance elements and Bollywood dance numbers used as a garnish, creating a story that’s universal in appeal.

And injecting his own style into genres is what gets him going, Kapoor mentioned, saying that “I’m interested to see how I can subvert the genre expectations and put my own twist on them.”

This Wes Anderson-inspired drama, which was acquired by IFC Films after its debut at Tribeca Film Festival, is relatable and humorous all at once. Even though the premise gives away a fair bit of the story, it doesn’t necessarily lessen the impact: You are still signing up for the fun stuff.

In this character-driven tale, there is little room for pretense, be it in acting, set design, or costumes. With several cultural references, the film perfectly encapsulates the Indian American experience without the stereotyping.

Potula, known for starring in shows such as ‘Veep’ and ‘Wild N’ Out,’ relishes his role and is very convincing as Vinny, who also carries around pain because of his father’s neglect.

With an effervescent on-screen persona, Bhattacharya (‘Grown-ish’) comes into her own with this role.

Shah, who was one of the first Indian American women to appear in a major role on a network comedy, ‘Scrubs,’ is effective as an IIT graduate who is stuck in a decades-long wait for a green card, while Patnaik’s charming presence adds to the weight of the film.

Even though Kapoor developed fully formed emotionally engaging characters which fit together like puzzle pieces, most of the actors landed the roles without auditioning.

“Pretty much all the casting was straight offers, no auditions because we knew these actors would nail their parts and bring them to life,” Kapoor told India-West. “Even though the parts are larger than life, it still required the actors to root them in some kind of emotional reality, especially for Venk playing the lead role of Vinny. At some point, I had started writing the role with Venk in mind thinking that he’d be the perfect lead for this band of misfits and outsiders, and he didn’t disappoint.”

The film activates a strong sense of community and belonging by including a number of commercial settings owned by Indian Americans. As Kapoor says, “If there was ever a movie made about a community by a community then this is it.”

Set against the backdrop of sari places, curry restaurants, Indian amateur-dramatic groups and South-Asian revolutionaries, “Four Samosas” not only underscores the importance of finding your voice, and your tribe but also celebrates the healing power of performance.

Little India had been on Kapoor’s radar for a while and he believes that it is a “love letter” to every Little India out there that reminds Indians of their homeland.  “It’s always felt like a world unto itself and I wanted to push that even more, so it felt like it was almost existing in its own parallel heightened universe,” he remarked.

This Tribeca Film Fest darling has generated a lot of buzz on the festival circuit. It is being enjoyed and celebrated within and outside the community. Giving a succinct summation of his current feelings, especially as the film nears its release date, Kapoor quipped: “I’m happy that it’s getting such a nice response, but I’m also the kind of person who’s always waiting for the other shoe to drop. So a qualified happy.”

Kapoor, who has directed/produced and written ‘Four Samosas,’ also features in a cameo as Vinny’s dad. Out of all the roles that he plays both in front of and behind the camera, writing and directing bring him the most joy.

“The producing has been a necessity to get the projects made, and while the acting is fun, it’s the writing and directing that is the most satisfying. It’s where I get to be the most expressive of my point of view and where I get to collaborate with amazing artists,” Kapoor, who has appeared in numerous TV shows and movies, told India-West, adding, “I think I’m actually liking the writing part the most. It’s in my head where everything is perfect!”

Indian American actors/filmmakers back in the day had limited access to mainstream entertainment. That appears to be changing, albeit at a slow pace and Kapoor agreed that it’s still too early to celebrate the strides that have been made.

“I think things have really opened up on many fronts, there’s a recognition of the value of telling stories from diverse perspectives,” he noted. “I do think that when it comes to bigger productions, the purse string holders still have a tendency to want us to tell stories that they are comfortable with like arranged marriage stories. Not that there’s anything wrong with those, but there’s also so much more to speak to.”

‘Four Samosas’ will release in theaters and on-demand on December 2.