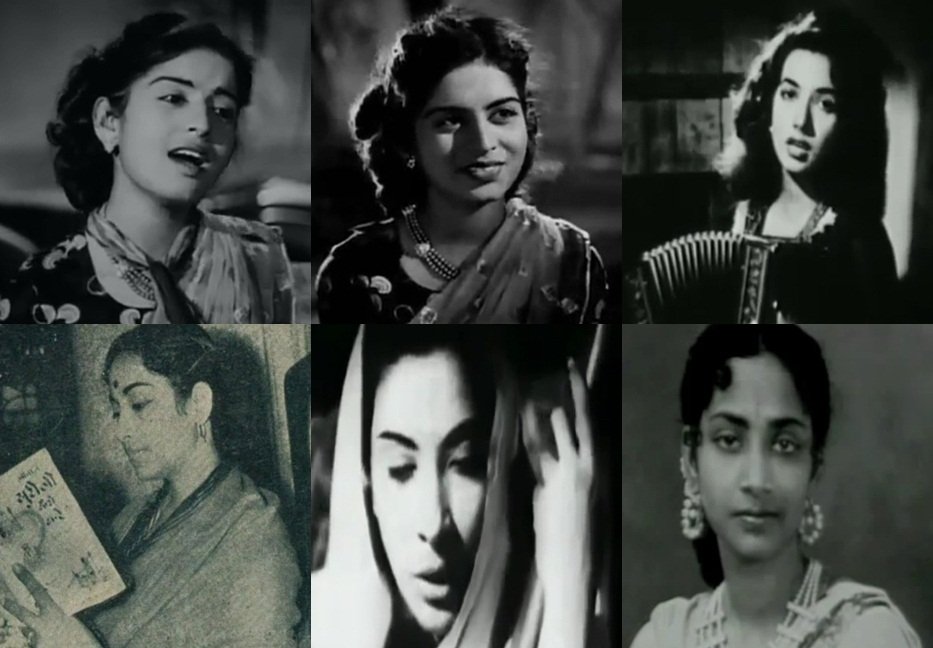 What moves the heart more when listening to a song? Polish and perfection, or the raw emotion that the performer brings to its rendition?

For those who prefer the second, there can be no better option than Geeta Dutt, who, in a short but stellar career, bequeathed to the Hindi film industry some rare gems, before the tragedy her life had become, dampened, and finally stilled her evocative voice.

Geeta Dutt, born Geeta Ghosh Roy Chowdhuri, who passed away on July 20, 50 years ago, seemed to have all it needed to make a successful career in films.

Performing in front of a mike for the first time as a teenager, she left industry veterans open-mouthed at the wealth of feeling she could convey with her voice, went on to do a string of songs that resonated across the country, and capped it all with a fairy-tale wedding to an intense and capable emerging star — Guru Dutt.

Born in 1930 into a wealthy landlord’s family in what is now Bangladesh, her family left it behind in the early 1940s and moved to Calcutta and then Bombay. She was just 16 when composer Hanuman Prasad chanced upon her and gave her a few lines in his mythological film “Bhakta Prahlad” (1946).

It was S.D. Burman, who was then impressed with her, and made her sing in “Do Bhai” — where the initially reluctant producer Chandulal Shah was so impressed that he signed her on the spot.

It was the Dilip Kumar-Nargis starrer “Jogan”, where she rendered a brace of Meera bhajans with a rare sensitivity and restrained anguish that brought her to the spotlight, and “Anandmath” only increased her value.

Geeta Dutt went on to prove that her sketchy training in music was no bar to her effortless and effective rendition of a wide range of songs, from the deeply spiritual to the skillfully sensuous, to those dripping with pathos to the gently flirty, and the playful to the profound.

A few years down, however, it all began to go wrong — her husband not only proved insecure of her talent and tried to restrict her to his own productions, but also engaged in an affair with a leading lady, which drove Geeta Dutt into a vortex of despair and made her turn to drink to assuage her sorrows.

If that wasn’t all, Guru Dutt’s accidental death/suicide in 1964, along with the problems and debts he left behind, hung heavy on her, and forced her to do stage shows to sustain herself and her family, till her health problems caused by her heavy drinking in her unhappy life led to her untimely — and much mourned — death.

Let’s revisit her voice, which so transfigured with the feelings she brought to her lyrics, with some of her best, in the height of her fame and renown, in free India’s first decade, where she stood her ground against Lata Mangeshkar.

“Khayalon Mein Kisi Ke” – Sung along with Mukesh, this wistful and haunting love song from “Bawre Nain” was the best vehicle for the poignancy that Geeta Dutt could bring to her voice. The song was picturized on Raj Kapoor and Geeta Bali. The lyrics were by director Kidar Sharma himself, and the music by Roshan — the grandfather of Hrithik.

“Ghunghat Ke Pat Khol” – This Meera bhajan was rendered with verve and feeling by Geeta Dutt in this offbeat film, inspired by the life of the legendary poetess herself. She did many other Meera bhajans in this, with all the pain and fervour that could entail, though later confessing her personal choice was the rendition of “Mar jaa jogi”. Bulo C. Rani was the music composer.

“Tadbeer Se Bigdi Hui Taqdeer” – Showing that she was at home with Western/jazz-based music too, Geeta Dutt did full justice to this nightclub number in the noirish “Baazi” (1951), starring Dev Anand and Geeta Bali. S.D. Burman provided the music and Sahir Ludhianvi the lyrics.

“Ye Lo Main Haari Piya” – It is difficult to pick the best from “Aar Paar” (1954). Should it be the duets “Mohabbat Kar Lo, Ji Bhar Lo” or “Arey, Na Na Na, Tauba Tauba” (with Mohammad Rafi) or the playful “Babuji Dheere Chalna” that show Geeta at her best. But this one, with the air of sweet resignation that she portrays, makes it stand out. O.P. Nayyar was the music director and Majrooh Sultanpuri did the lyrics.

“Na Yeh Chand Hoga” – Showcasing her capability, Geeta marked her presence with this song from “Shart” (1954), where Lata Mangeshkar and Asha Bhosle sang most of the numbers. The dreamy music of Hemant Kumar was well suited to this song, which came twice — once in his voice and once in hers, with she is matching the languor he brought to it.

“Udhar Tum Haseen Ho” – “Mr. & Mrs. 55” (1955) again spoils us for choice. Do we pick the playful “Jaane Kahan Mera Jigar Gaya Ji”, where Geeta Dutt is paired with Rafi, or the classical-tinged “Preetam Aan Milo”, which she sang both as a solo and a duet, or “Thandi Hawa, Kaali Ghata”, where she proves that she is a match for the redoubtable Shamshad Begum as well. This soft romantic duet with Rafi also stands out. Nayyar and Majrooh provided the music and the lyrics, respectively.

“Jaata Kahaan Hai Dewaane” – When it comes to “C.I.D.” (1956), it was Shamshad Begum all the way with “Boojh Mera Kya Naam Re”, “Leke Pehla Pehla Pyaar”, and above all, “Kahin Pe Nigaahen Kahin Pe Nishaana”, but Geeta Dutt shines with this gently beguiling song in what is termed as one of the best Hindi thriller films ever. It was the same Nayyar-Majrooh team again.

“Aaj Sajan Mohe Ang Lagalo” – This Baul music-influenced and subtly sensuous song from “Pyaasa” (1957) more than holds its own, than her other solo “Jaane Kya Tune Kahi”, or the waltz duet “Hum Aap Ki Aankhon Mein”. The music was by S.D. Burman and the lyrics by Sahir.

“Na jaao saiyan chhuda ke baiyan” – Coming to know of her husband’s affair with Waheeda Rehman, Geeta Dutt flatly refused to sing for her any longer, but unbent to sing for Meena Kumari in “Sahib Bibi Aur Ghulam” (1962), where both the actress and the singer proved that they were literally made for each other in portraying hapless pathos. Hemant Kumar was the music director and Shakeel Badayuni the lyricist.

This song could have been an appeal to Guru Dutt – but it seems to have gone unheeded.