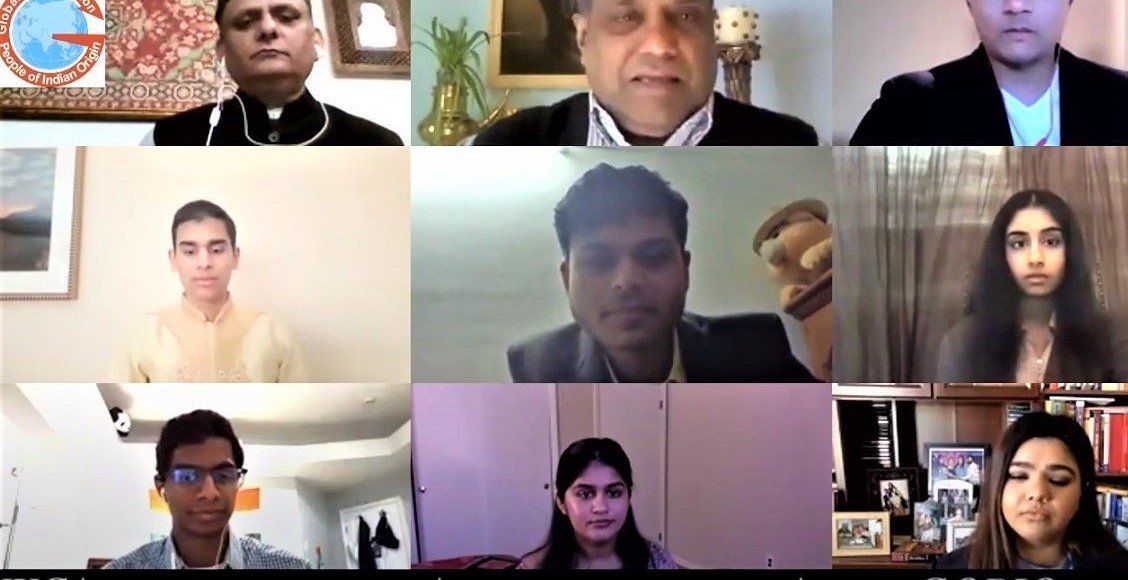 Identifying youth leaders and supporting them in their efforts could be a critical link between the Government of India and the immigrant youths spread around the world, according to GOPIO International. With the objective of providing a youth forum to help amplify youth actions, GOPIO International organized a virtual session March 7, “India’s Outreach to Diaspora-Youth Perspective.”

Youths and senior leaders of the diaspora from around the world provided their perspectives on the issue at the first ever webinar.

In his introductory remarks, Dr. Thomas Abraham, GOPIO International’s Indian American chairman, pointed out that as the youth-led initiatives and their success stories around the world have shown, collective action from young people is already changing things for the better.

“Today’s event is one such event to encourage the youth of Indian origin to aspire to be youth leaders and to help network youth from around the world with the youth in every GOPIO chapter around the world,” he noted a press release.

ARSP’s objectives, according to Mudgal, are “to take the initiative with the Indian diaspora to the next level by: outreach to diaspora; engaging the youth of Indian origin; helping the diaspora in research and publication; and expansion of diaspora organizations around the world and in India.”

Noting that the Indian diaspora is one of the most successful in every domain, Mudgal said, “You have done very well. You also enjoy tremendous goodwill among the host nations. Diaspora plays an important tool of power as each of you is the Ambassador of India.”

He asking them to reflect on the “changes we need to make to shine more?”

The lively session, attended by talented youths from the U.S. and Europe, was moderated by Dr. Beena Ramachandran of GOPIO-Connecticut.

Ananya Kotian, a high school junior aspiring to pursue an education in psychology, in her presentation, advocated for virtual cultural experiences.

Founder of the blog Cultural Kaleidoscope, which delves into Asian culture from a young Indian American’s perspective, a tutor and STEM mentor for the Boys and Girls club, Kotian said, “We are successful because of the values we have inherited from our country of origin, India.”

Anjo George, a junior who is well-rounded in academics, music, swimming and technology, said Indian government’s Know India Program “helps us learn and promote Indian culture, while enabling us share our views and bond closely with India, and help reflect a positive image about India.”

Viswaa Sofat, a freshman at U.C. Berkeley, shared with the audience how he tries to remain strong and fundamental to his identity as a person of Indian origin. He said he hopes to use this opportunity to learn from other like-minded individuals and further involve Indian youth abroad.

Abhi Parikh, currently living in Paris, and originally from Ahmedabad, India, said she is involved in two start-ups and has started a few Indian communities on Facebook to gather Indian people on a common platform.

She urged the government to tap the youth force through encouraging steps. She shared with the participants about how developing social media platforms help youth establish startups by youth.