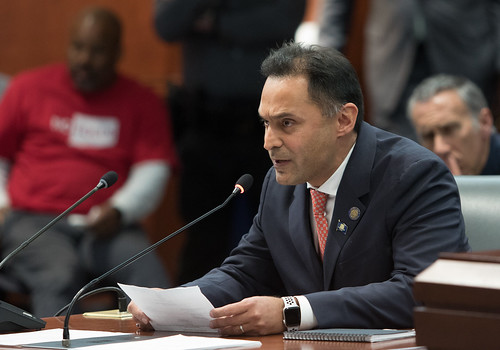 Republican Harry Arora, running to be State Treasurer is the first Indian American to make it as a candidate on a statewide ticket in CT.

Currently, a two-term elected official in the state legislature (CT -151) which includes Greenwich and Stamford, he was in the forefront when an issue arose around Indian sovereignty, Harry welcomed the Indian Consul to the CT General Assembly with a standing ovation and went on to lead the effort to resolve the issue. Arora is also the current Ranking Member of the Labor Committee – a rare appointment for any legislator in their first few years.

Arora’s campaign office is also keen to point out that he has 25 years of finance and investment experience making him uniquely qualified for the job he is now seeking. In 2006, Arora founded a hedge fund and over the past decade, has had a successful career managing money for large institutions until his pivot into public service in 2018.

Coming from humble beginnings, Arora was born in Baroda and went on to graduate at the top of his class in electrical engineering at the University of Delhi.  He moved to the US on a student visa and completed business school on scholarship at UT Austin. He later went on to complete a master’s in public administration at Harvard Kennedy School.

Expressing concern that the “Indian American community tends not to vote in midterm elections and has amongst the lowest turnouts,” the campaign office urged greater participation at the polling booth on November 8. CT citizens can also vote absentee this year and can apply for an application online.