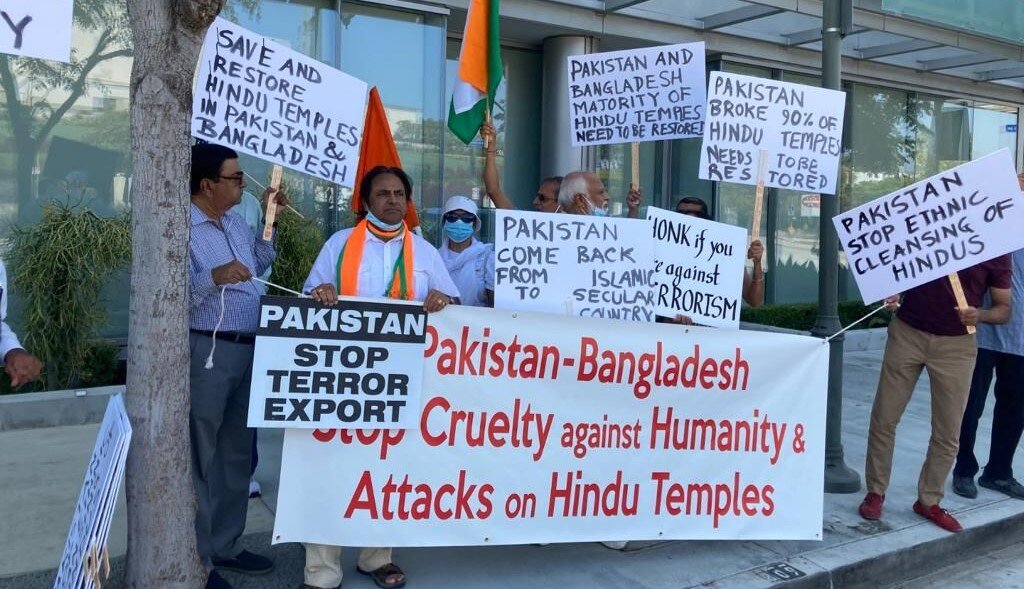 Picketers outside the Pakistan Consulate in Los Angeles on the morning of Aug. 13 were concerned about the state of Hindus in Pakistan. The following day a protest was held in “Little India” in Artesia, home to many Indian American businesses. (photo provided)

LOS ANGELES, Calif. – A group of Hindus in Southern California, concerned about the vandalization of a temple in Pakistan, picketed at two venues on the weekend of Aug. 13 and 14. The first, on the morning of Aug. 13, was outside the Consulate General of Pakistan in Los Angeles and on the following day, in “Little India” in Artesia.

The group held up signs that variously demanded that Pakistan and India’s other neighbor Bangladesh, stop “atrocities” against Hindus. “Pakistan stop human rights violations in name of blasphemy,” and “Pakistan stop ethnic Hindu cleansing,” were among the signs that were held by the protestors. In Artesia, organizers said while they encountered curious and supportive shoppers, there were also “tense conversations” with some who said the protestors were “spoiling Pakistan’s image.”

The trigger for the picketing, the group in a statement said, “was the vandalization of the very sacred Siddhi Vinayak temple by a mob in Bhong city in the district of Rahim Yar Khan on Aug. 4. Pakistani authorities did nothing to stop the mob while they destroyed everything in the temple.” The press release stated that over 90% of Hindu temples in Pakistan had been destroyed.

Protestors also demanded that Pakistan stop the “forced conversion” of Hindus, Sikhs, Christians, and other minorities.