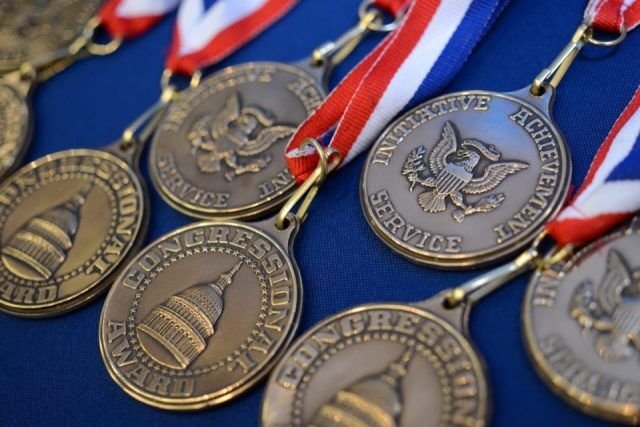 Recipients of Congressional Gold Medals are honored for achieving their own challenging goals after registering for the program. (congressionalaward.org photo)

In California, Arushi Agastwar and Avishi Agastwar of Cupertino, Hasitha Nimmagadda of San Jose, and Saurav Gandhi of Sunnyvale were named in Rep. Ro Khanna’s 17th Congressional District; and Anisha Singh of Brea and Aneal Singh of Yorba Linda were recipients in the 39th District.

In Illinois, Suraj “Neil” Sheth of Bolingbrook was the recipient in the 11th Congressional District.

Dhruv Pai of Potomac was named the recipient in Maryland’s 6th Congressional District.

In New York’s 24th District, Abby Kambhampaty of Jamesville was awarded with the honor.

Portland’s Srilaasya Yenduri was a recipient in the state’s 1st Congressional District.

In South Carolina, Kritika Ravichander of Greer was named a gold medalist in the 4th Congressional District.

In Texas, Dia Jain of Austin was named in the 10th District; and Meghan Anand of Sugar Land; Jiya Jhonsa, Ashwin Murali and Amar Sehgal, all of Pearland; and Samitha Nemirajaiah of Katy were all named in the 22nd District.

The Congressional Award is the United States Congress’ award for young Americans. The program is non-partisan, voluntary, and non-competitive. Young people may register when they turn 13 and a half years old and must complete their activities by their 24th birthday.

This is not an award for past accomplishments. Instead, recipients are honored for achieving their own challenging goals after registering for the program, the foundation noted.

Regardless of a recipient’s situation, they can earn the Congressional Award, which has no minimum grade point average requirements. It accommodates young people with special needs or disabilities who are willing to take the challenge, it said.

The foundation said the recipients will be honored at the annual Gold Medal Ceremony in summer 2021.