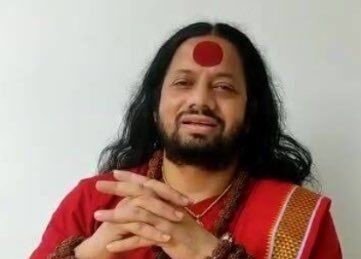 Mahatma Gandhi was shot dead by a Hindu extremist during a prayer meeting in the Indian capital in 1948, because he was considered sympathetic toward Muslims during the partition of the Indian subcontinent.

According to media reports, Maharaj said “Gandhi destroyed the country … salutations to Nathuram Godse, who killed him.”

He will be formally charged in court after the police complete an investigation. If convicted, he can be jailed up to five years.

The opposition is also demanding the arrest of several saffron-robed Hindu religious leaders for making highly provocative speeches against Muslims at a closed-door religious parliament, known as Dharam Sansad, earlier this month in the northern holy city of Haridwar.

Police in Uttarakhand state, which is ruled by Modi’s Bharatiya Janata Party, said they were questioning suspects. No arrests have been made.

Kalicharan made controversial speech at a ‘dharam sansad’ or religious gathering held in Raipur on Dec. 26.

As per police, Kalicharan booked a guest house in Khajuraho but did not stay there, instead went to a rented house, some 25 km from Khajuraho. To evade arrest, all his close aides had also switched off their mobile phones, sources said.

On Dec. 30 morning, a team of 10 policemen tracked him down, arrested him and took him back to Chhattisgarh’s capital Raipur.

“Kalicharan has been arrested from Madhya Pradesh’s Khajuraho area and taken to Raipur,” said a senior police official from Chhattisgarh on condition of anonymity.

The police official also said that Kalicharan will be produced before a court by Thursday evening.

In a video clip that was widely circulated on social media, Kalicharan declared that “the aim of Islam is to capture the nation through politics.”

“Mohandas Karamchand Gandhi destroyed the country. Salutations to Nathuram Godse, who killed him,” he added.

During his speech, Kalicharan was also heard urging people to elect a staunch Hindu leader to protect Hinduism.