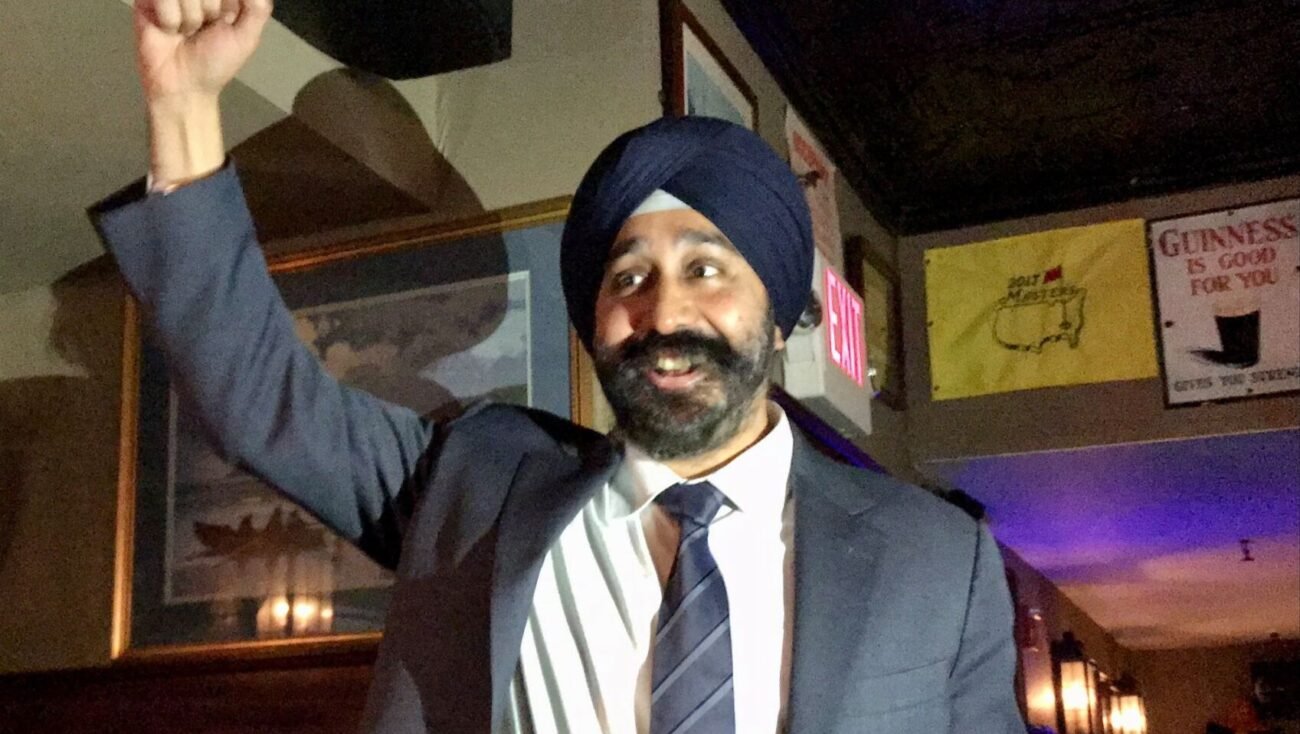 Hoboken, New Jersey Mayor Ravinder ‘Ravi’ Bhalla June 2 formally announced his re-election bid, pledging to serve as a regional and national leader in a post-pandemic world. The Indian American mayor, who was first voted into office in 2017, has the distinction of being one of the first mayors to issue “shelter-in-place” orders in March 2020. (photo courtesy of Ravi Bhalla)

The campaign will formally kick off June 24, with an event at the Pilsener Haus and Biergarten, beginning at 6 p.m.

The Indian American mayor, who was first voted into office in 2017, has the distinction of being one of the first mayors to issue “shelter-in-place” orders in March 2020, as the pandemic was making its presence known in the U.S. New York and New Jersey were hit particularly hard in the initial months of the global crisis.

Bhalla also holds the distinction of being the first Sikh American directly elected to office. He won his seat in 2017, emerging victorious from a crowded field of six candidates, by earning the endorsement of former Mayor Dawn Zimmer, who decided not to seek re-election.

Bhalla serves a town that is exactly one square mile, with 55,000 residents.

In a 2017 interview, Bhalla told India-West that one of his primary concerns was to mitigate the impact of extreme inclement weather. In 2012, Hurricane Sandy cast its furor over the coastal city, impacting more than 85 percent of its residents. The severe storm wreaked more than $100 million in property and infrastructure damage.

A 2014 report by the Union of Concerned Scientists notes that more than half of the coastal city’s residents live in areas that are below five feet above-average sea level, placing them at great risk for flood damage.

The city council has acquired eight acres of additional green space, some through eminent domain. The recreational spaces have another purpose: through a novel scheme, the city has incorporated storm water collection tanks underneath the park which can store up to 500 million gallons of water.

The water is pumped off the street during flooding and stored in the tanks until it is treated properly, then discharged into the nearby Hudson River, explained Bhalla. “We have made the city more resilient against flooding.”

In a press statement reviewing his first term in office, Bhalla noted: “With an eye to the future, we looked at ways to create sustainable, environmentally sound infrastructure improvements that reflect the values we share as a community.”

“We began construction on our historic Northwest Resiliency Park, kicked off our Rebuild by Design flood protection project, renovated our neighborhood parks, and proactively replaced aging water mains for the first time in decades. We’re creating safer streets through our Vision Zero pedestrian safety campaign and a more resilient city through our Climate Action Plan.”

“And together, we made the tough choices that prioritized the health and safety of our community during a global health crisis, putting our citizens first while also working to protect the local businesses that are the heart of our community.”

“Hoboken was consistently at the forefront of the pandemic every step of the way, and I have no doubt we’ll continue to serve as a regional and national leader in a post-pandemic world. I know the best is still to come for our Mile Square,” stated Bhalla.

Hoboken received $27 million from the American Rescue Plan, a federal-level lifeline aimed at getting small businesses back on their feet, and cash payments to individuals with household incomes of less than $72,000.

Working with Lyft, Hoboken launched a Citibike initiative in May, with 300 bicycles and 15 stations. The program allows riders to pick up a bike from a docking station, ride it to a docking station near their destination, and drop it there.

Tap Into Hoboken reported that while Covid has taken up much of the mayor’s time over the past year, uncertainty over public safety issues will likely become more of a debate as Hoboken Police Chief Kenneth Ferrante announced his retirement, while Hoboken Fire Chief Brian Crimmins was placed on administrative leave.

Currently, no other candidates have announced a challenge to the incumbent. Bhalla has already received the endorsement of the Hoboken Police Superior Officers Association.

“We know firsthand how committed Mayor Bhalla is to protecting the health and safety of Hoboken residents and ensuring the improvement of policing standards,” said Lieutenant Ed Drishti, president of the Hoboken Police Superior Officers Association, as reported by the Hudson Reporter. “His proactive and effective leadership on COVID-19 and on reducing crime demonstrates that he is the right man for the job. His ongoing support of our police department and its leadership has allowed seamless transition into new policies and addressing growing community needs. We enthusiastically back Ravi Bhalla for re-election,” said Drishti.

Bhalla has lived in Hoboken, New Jersey since 2000. He lives with his children, Arza and Shabegh, and his wife, Navneet (also known as Bindya), a human rights attorney.

Bhalla received his undergraduate education from U.C. Berkeley, where he received a B.A. in political psychology. He later received his master’s in public administration and public policy from the London School of Economics in the United Kingdom and his juris doctorate from Tulane Law School in New Orleans, Louisiana.