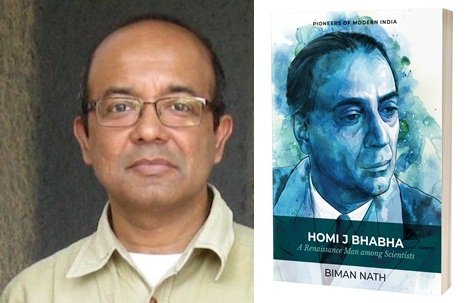 NEW DELHI (IANS) – Setting the record straight in the midst of the controversy over the ‘Rocket Boys‘ TV series that has been panned, as one critic put it, of being an “unfocused document of an intriguing period in Indian history” comes a monograph that brings to light the life and times of Homi Jahangir Bhabha, who laid the foundation for India’s nuclear programme.

“Bhabha has left a rich legacy in Indian science that enriches us even today. He recognised what India needed to gain a foothold in world science in its post-Independence era and had the determination to push through his ideas. The rare combination of calibre and confidence in Bhabha made him the icon that he was, and this is what makes us look back at his life and work even after half a century of his passing away,” says author Biman Nath, an astrophysicist at the Raman Research Institute of ‘Homi J Bhabha – A Renaissance Man among Scientists’ (Niyogi Books).

Bhabha’s far sightedness and enterprise shaped the development of modern science in India. Understanding the need for achieving self-reliance, he laid the framework for nuclear research in India by founding The Tata Institute of Fundamental Research (TIFR) and the Atomic Energy Establishment, Trombay (AEET), later renamed Bhabha Atomic Research Centre (BARC) in his honour. Bhabha achieved international prominence for his trailblazing studies in the field of Atomic Energy, while his role of scientist-diplomat, handled with aplomb, gained worldwide recognition in the global arena.

This compelling monograph outlines the story of his life, his early work on cosmic rays, which remained a lifelong obsession, his struggles to translate theories into experiments, and his achievements.

A deeply evocative work, it portrays Bhabha’s visionary foresight in anticipating the urgent need for high-quality facilities in India to pursue research on nuclear energy. It also speaks of his passionate interest in art and architecture, drawing and painting, and his love for classical music, which made him stand out as a renaissance man among scientists.

Comprehensive and reflective, this monograph encapsulates Bhabha’s vision for India and sheds light on his rich legacy. His legendary leadership in organising scientific research in India, his drive and passion continue to inspire generations of students in India.

Take, for instance, his work on cosmic rays.

Since India is located near the magnetic equator, most low-energy particles were reflected away by the Earth’s magnetic field, leaving the high-energy particles, to enter the detectors put on balloons. There were more reasons that made India an ideal location for cosmic ray studies.

India also had the highest mountain range in the world, which provided a perfect location for cosmic ray studies at high altitudes. In balloon flights, one has a time within which the data could be collected, while at mountaintops, these studies could be extended for a longer time. India also had many mines, and instruments could be put at the bottom of these mines for cosmic ray studies.

This set-up would cut out many particles that were absorbed by the upper crust, leaving other particles to be detected by the instruments down below, and this allowed physicists to have a simple filtering system for different kinds of particles. Bhabha realised that this line of research was ideal for the Indian situation, because it required relatively modest financial means, with which frontline research could be done.

Besides, such activities would enable India to learn the techniques of modern experimental physics, and also instil among young Indian scientists a confidence that they could achieve scientific results in spite of obstacles.

Such was the drive that took Bhabha to heights that few scientists have achieved so far.