HomeIndiaHopes for Returning Home Dim for Afghan Refugees in India 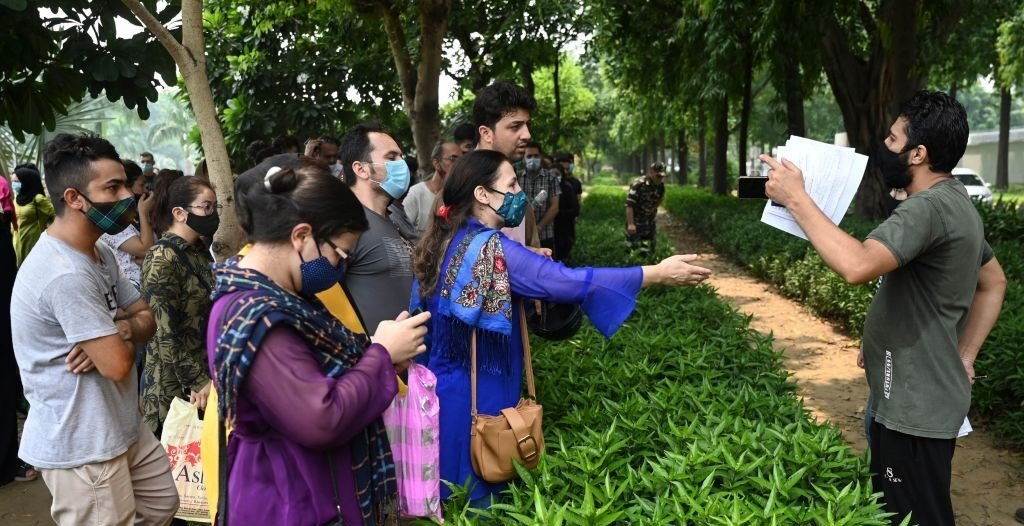 Afghan people gather outside the U.S. embassy in New Delhi on Aug. 19, 2021 to submit documents to apply for a visa. (Money Sharma/AFP via Getty Images)

NEW DELHI — Her memory of the assassination attempt is hazy. What she does know is that her father asked the Taliban to do it.

A former Afghan policewoman, Khatera Hashmi was shot multiple times on her way home from work last October in the capital of Ghazni province, south of Kabul.

As she slumped over, one of the attackers grabbed her by the hair, pulled a knife and gouged out her eyes.

Five months pregnant at the time, Hashmi survived the gruesome attack, as did her unborn child. Hashmi’s father had vehemently opposed her decision to join the police force, and although she didn’t elaborate on her father’s involvement, she told The Associated Press that the police had arrested and imprisoned him.

After recovering from her wounds, she and her husband fled to India, leaving two children in the care of her mother-in-law. Her third child, a daughter, was born a few months after their arrival in India.

However, like thousands of other Afghan refugees in India, any plans they had of returning were dashed this month by the Taliban’s shockingly swift takeover of the country.

What many thought would be a short, temporary escape has turned into a long-lasting exile.

Another Afghan refugee is Mohammad Akbar Farhad, a 50-year-old artist. He too dreams of home while living in suspended animation abroad.

On a hot August afternoon at his apartment in New Delhi, his brush made brief, generous strokes on a huge oil painting depicting the ruins of the Bala Hissar, or High Fort, Kabul’s ancient citadel that housed Afghan rulers for centuries.

“This is my only source of income,” Farhad said, tracing the contours of the canvas with his fingers.

Back in Kabul, he faced repeated threats from Taliban sympathizers — always armed — who demanded he close his art studio. They said his work fell outside the bounds of Islamic law.

When the threats became more frequent, his entire family ran away to their village in the countryside. In their absence, their house was ransacked and his paintings torn to shreds.

“After that, I didn’t even have the courage to touch my brush for months,” he said.

Farhad fled with his family to India in 2018, expecting to return.

Earlier this year, the insurgents burned his art studio. All of his artwork was destroyed, leaving him crestfallen. And that was before the government in Kabul collapsed.

Concern for her loved ones back home fills Hashmi, the policewoman, with dread.

“I will never be able to go back to Afghanistan now, even if I wanted to,” the 33-year-old said in her modest two-room apartment in New Delhi, where she lives with her husband and daughter Bahar, now seven months old.

“Women there won’t be able to live in peace now. They won’t even die in peace, even if they wish to,” she said.

“Everything is gone,” she said after a brief pause. Her husband, Mohammad Nabi, looked at her with tenderness but said nothing.

Nabi was a shop salesman back in Ghazni. The two fell deeply in love, and she made it clear before they got married that she planned to join the police.

“I saw what the Taliban did to women. I wanted to do something for them. I wanted women to get their rights,” she said.

Nabi supported her decision, even though it would eventually make his wife a target, and the two began building a family together.

Hashmi’s father threatened her, insisting she quit. She wouldn’t budge.

After the attack that blinded her, the police said they arrested her father and sent him to a prison at Bagram Air Base outside Kabul. When the Taliban swept into the capital, Afghan forces at the former U.S. base surrendered. The prison had housed 5,000 inmates, including Taliban and Islamic State group fighters.

Imagining that her father might now be a free man fills Hashmi with horror.

“If I go back to Afghanistan, the Taliban might cut off my legs this time,” she said.

But life in India remains difficult.

“Whenever I hold Bahar in my arms, I feel sad. My husband can’t leave her alone. He can’t even go to work. Sometimes we don’t even have money to buy food,” Hashmi said, winding her way back to the bedroom as Nabi holds her by the hand.

Although she says their love has grown while in exile, they also struggle. Food sometimes runs scarce because charity money from fellow refugees isn’t enough. Phone calls home often cut out due to the poor cellular network. Being separated from her children is a nightmare.

And in particular, they fight to live a dignified life trapped within a complex bureaucratic process to register as refugees in India. The system strains under a yearslong backlog.

As of 2019, Afghans accounted for around a third of the nearly 40,000 refugees registered in India, according to the U.N. refugee agency. But that figure excludes those who, like Hashmi’s family, are not registered with the U.N.

“My wife gave her eyes for her country. But nobody helped us,” Nabi said. “Not even our own government.”

For these two Afghan families, the Taliban blitz toward Kabul left them feeling isolated and further from home than ever.

“I haven’t slept properly for weeks,” said Farhad, the painter. “All I think of is my country.”

His son Hassan is angry at his country’s politicians — and the U.S.

“America has failed us,” he said.

In related news, IANS adds from New Delhi: As the heart-wrenching images from Kabul airport went viral in the media, the Afghans living in India were anxiously praying for the well-being of their near and dear ones in their home country. While there cannot be any measure for their trepidation and pain, there was some solace at having secured a dignified life and social security in India, a country which embraces diversity with love and warmth.

According to the United Nations High Commissioner for Refugees, there were approximately 40,000 refugees and asylum-seekers registered in India in 2019. At 27 per cent, Afghans were the second-largest community amongst them.

Most of the Afghan refugees living in India are concentrated in New Delhi. The capital’s Lajpat Nagar, a colony originally built for partition refugees from Pakistan, acts as a home for many Afghans. Those living here seem to have integrated themselves into the local customs and traditions, part of India’s rich and syncretic cultural heritage.

Men wearing Pathani salwar kurtas and women clad in abayas can be seen here, expressing themselves freely without any inhibitions. Additionally, the Afghan community has also become an important part of the local economy, running restaurants and stores, flocked by people, with signboards written in both English and Dari languages.

With the Taliban taking over Afghanistan, however, the “Afghan colony” in Lajpat Nagar and Bhogal that has many shops, travel agencies and restaurants catering mostly to Afghan students, medical tourists and refugees are in the grip of fear with people making desperate enquiries about each other’s families back home. Though most of them do not want to go back home, the worry for the safety of those left behind is not letting them sleep.

Today, there are over 16,000 Afghan students pursuing higher education in India, and during the last two decades, over 60,000 graduates, post-graduates and other professionals have returned to Afghanistan after completing their training in the country.