HomeIndiaIndia and the worldHouse Overwhelmingly Passes Anti-Hate Crime Bill, Which Heads to President Biden’s Desk for Signing into Law 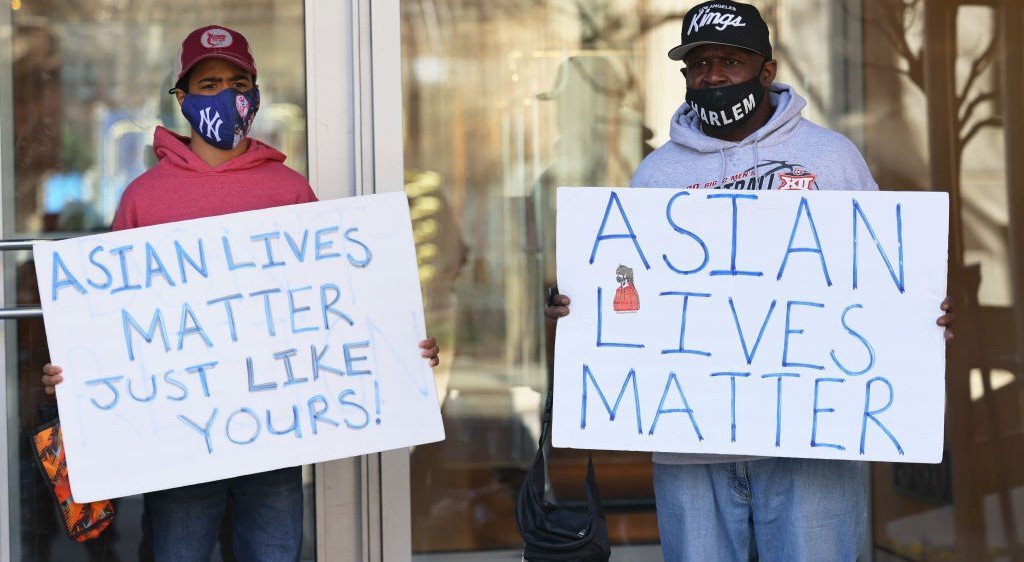 Cameron Hunt and his father Calvin Hunt stand outside a building in midtown Manhattan on March 30 with signs of support for Asian Americans. The web portal Stop AAPI Hate logged 6,603 self-reported anti-Asian American hate crime cases from March 2020 to the end of March 2021. About 43 percent of the hate crime attacks were against Chinese Americans; bias-motivated crimes against Indian Americans made up 1.8 percent of the reported cases. (Michael M. Santiago/Getty Images)

In a rare moment of bipartisanship, the House May 18 afternoon passed the COVID-19 Hate Crimes Act, which mandates a review of hate crimes committed during the pandemic by the Justice Department —including expedited procedures for processing cases — and more resources for hate crimes reporting and assistance for victims of hate crimes.

The legislation also mandates the Department of Justice to issue guidance on establishing online hate crimes and authorizes grants for states to create state-run hate crimes reporting hotlines and crime reduction programs to prevent, address, or respond to hate crimes.

Perpetrators convicted of federal hate crime offenses must participate in educational classes or community service directly related to the community harmed by the defendant, as a condition of supervised release.

The House passed the bill on a 364-62 vote. On April 22, the Senate passed the same version of the bill on a 94-1 vote, with only Republican Josh Hawley from Missouri voting against the measure. Sens. Marsha Blackburn, R-Tennessee; Amy Klobuchar and Tina Smith, both Democrats from Minnesota; Mike Lee, R-Utah; and Rand Paul, R-Kentucky, did not vote on the bill.

The bill next heads to President Joe Biden’s desk for signing into law. The president has indicated he will sign it: the White House had not issued a statement by press time May 18.

The bill was sponsored in the House by Rep. Grace Meng, D-New York, and in the Senate by Sen. Mazie Hirono, D-Hawaii.

“I commend my colleagues in the House for taking action to combat the despicable and sickening acts hate and violence against Asian Americans, and for having the Asian American community’s back as we fight this xenophobia and racist attacks,” said Meng in a press statement.

“Those of Asian descent have been blamed and scapegoated for the outbreak of COVID-19, and as a result Asian Americans have been beaten, slashed, spat on and even killed. The Asian American community is exhausted from being forced to endure this ongoing racism and prejudice,” she stated.

Hirono tweeted: “Today, Congress sends a powerful, united message that we stand in solidarity with the AAPI community as we confront an epidemic of racism and intolerance.”

Asian Americans have experienced a massive spike in hate crimes during the pandemic. The web portal Stop AAPI Hate logged 6,603 self-reported cases from March 2020 to the end of March 2021. Two-thirds of the cases were of verbal harassment or shunning. More than 12 percent involved physical violence.

About 43 percent of the attacks were against Chinese Americans; bias-motivated crimes against Indian Americans made up 1.8 percent of the reported cases. More than two-thirds of incidents involved female victims. Elderly people were attacked in broad daylight in parts of town known to host Asian Americans.

Community activists attributed the spike in anti-Asian American hate crimes to the divisive rhetoric of former President Donald Trump who took to calling Covid the “Chinese virus,” the “Wuhan virus,” for the city in which the virus was first identified, and “Kung Flu.”

Reported incidents are often not defined as hate crimes by law enforcement, contributing to an undercount of such activity.

Indian American community activist Manju Kulkarni, co-founder of the Stop AAPI Hate web portal and executive director of the Asian Pacific Policy and Planning Council, fears violence against the Indian American community, as news emerges of new mutant variants first found in India, which are spreading to the U.S. “The language and verbiage that’s being used creates racial animus against individuals,” she told India-West.

In a press statement, Stop AAPI Hate said it was pleased the measure had passed.

“However, because the Act centers criminal law enforcement agencies in its solutions, it will not address the overwhelming majority of incidents reported to our site which are not hate crimes, but serious hate incidents,” said the organization.

It urged the federal government to build a strong civil rights infrastructure by investing in community organizations, which often serve as first responders in a community. It also encouraged expanding ethnic studies programs in education, among other measures.

The National Asian Pacific American Bar Association also supported the passing of the bill. “This law will require the Departments of Justice and Health and Human Services to issue guidance aimed at raising awareness of hate crimes during the COVID-19 pandemic. Asian American communities have, unfortunately, been suffering at the intersection of these twin outbreaks for far too long now,” said NAPABA president A.B. Cruz III in a press statement.

NAPABA in partnership with the Asian & Pacific Islander American Health Forum have produced a hate crimes reporting toolkit — translated into 25 languages and English — which provides basic and critical information for victims, community based organizations, and community leaders.

The Associated Press reported: To some activists, including organizations representing gay and transgender Asian Americans, the legislation is misguided. More than 100 groups have signed onto a statement opposing the bill for relying too heavily on law enforcement while providing too little funding to address the underlying issues driving a rise in hate crimes.

“We have had hate crimes laws since 1968, it’s been expanded over and over again, and this new legislation is more of the same,” said Jason Wu, who is co-chair of GAPIMNY-Empowering Queer & Trans Asian Pacific Islanders. “These issues are about bias, but also rooted in inequality, and lack of investment and resources for our communities, not a shortage of police and jails.”

Meng acknowledged some of the concerns raised by the groups, but countered that the widespread underreporting of hate crimes needs to be addressed.

“Law enforcement is currently underreporting these kinds of incidents and it makes it easy to ignore hate crimes all together,” she said.

Rep. Jim Jordan, an Ohio Republican, suggested that the surge in Asian American violence was tied to efforts backed by some Democrats and other progressives to decrease funding for the police.

“This violence, by and large, is happening in Democrat-controlled cities,” said Jordan. If “money wasn’t taken from police and they were allowed to do their jobs, we would probably be in an entirely different position.”