HomeIndiaIndia and the worldHouse Passes American Dream and Promise Act, Providing Pathway to Citizenship for Children of H-1B Workers 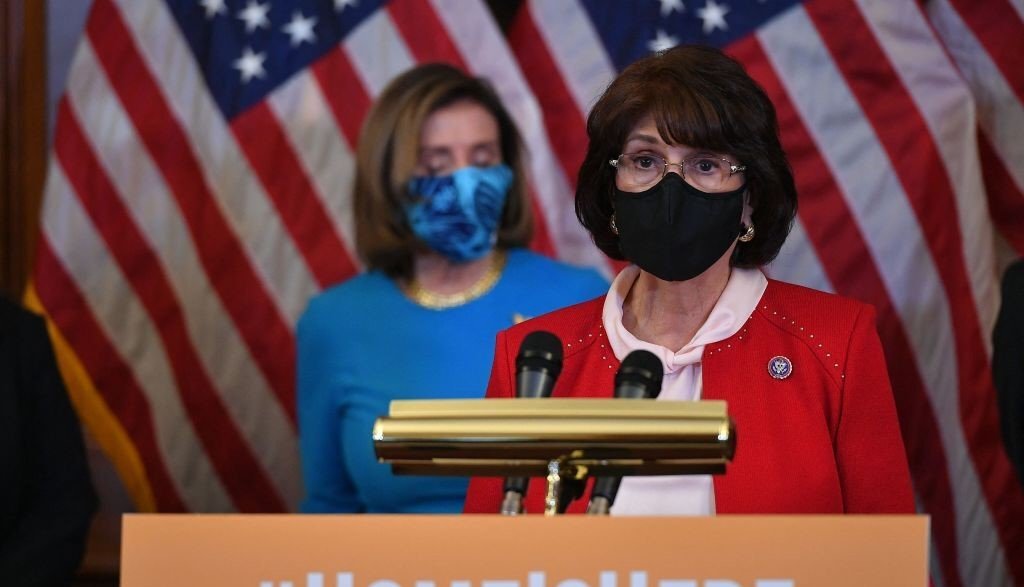 Rep. Lucille Roybal-Allard (right), seen with Speaker of the House Nancy Pelosi, both Democrats from California, speaks about immigration at a press briefing on Capitol Hill in Washington, DC, on March 18. DALCA (Deferred Action for Legal Childhood Arrivals) children have become an issue as more H-1B visa holders, largely workers from India, get stuck in a decades-long queue for a green card. (Mandel Ngan/AFP via Getty Images)

The House March 18 passed the American Dream and Promise Act, a sweeping measure which provides a pathway to citizenship for undocumented children known as Dreamers, as well as children of H-1B workers who are aging out of their H4 dependent status.

The bill was sponsored in the House by Rep. Lucille Roybal-Allard, D-California. According to data from the Migration Policy Institute, more than 2.3 million Dreamers, 171,000 legal Dreamers, known as DALCA (Deferred Action for Legal Childhood Arrivals) children, and 393,000 people with Temporary Protected Status would be eligible, provided they meet certain criteria.

The three-step process includes, first, getting a 10-year conditional resident visa. Eligibility for a conditional visa includes having entered the U.S. before the age of 18 and being present in the U.S. since January 2021; never having been convicted of a crime other than a traffic violation — the bill particularly notes that those who have been convicted of domestic violence or sexual assault do not qualify; earning a high school diploma or the equivalent GED or a certificate from an apprenticeship program.

The next step is obtaining legal permanent residency, which requires acquiring a degree from a U.S. institution of higher education; or completing at least two years in good standing in a bachelor’s or higher degree program or in an area career and technical education program at a post-secondary level in the U.S. Dreamers and DALCA kids can also complete at least two years of military service, or be employed for periods of time totaling at least three years and at least 75 percent of the time that the person has had employment authorization.

Legal permanent residents can apply for citizenship after five years.

DALCA children have become an issue as more H-1B visa holders, largely workers from India, get stuck in a decades-long queue for a green card. Under the current system, no single country can get more than seven percent of the 140,000 employment-based green cards allotted each year. About 9,800 employment-based green cards are approved for Indians each year, leaving more than half a million others in a backlog that can last up to 70 years.

The children of H-1B visa holders can keep their H4 dependent status until they turn 21. They must then port to another status or return to the home country. Children who have lived in the U.S. for most of their lives find they must obtain an F-1 international student visa and pay much more expensive international student tuition. Moreover, they have no guarantee of remaining in the U.S. once their studies are finished.

Many DALCA children simply drop out of the system and become undocumented. Or the family is forced to move back to the home country.

If the bill passes the Senate, and is signed into law by President Joe Biden, who has expressed his support for the measure, DALCA kids who become U.S. citizens would be able to sponsor their parents stuck in the green card cue.

“It is always really exciting to see movement on this issue. Legal Dreamers are often overlooked in this discussion,” Sarah Pierce, policy analyst at the Migration Policy Institute, told India-West. She noted that DALCA children are still eligible for protection even if they have overstayed — and thus become undocumented — or if they have already ported to another status.

One parent must hold H-1B, L1, E-1, or E-2 status and must have applied for a green card in order for their son or daughter to be eligible, Pierce explained.

Doug Rand, co-founder of Boundless Immigration, told India-West the passage of the bill in the House was a positive development. He and Pierce both believe the measure will have a tough time in the Senate, where it needs a majority plus 10 votes.

“There is broad bipartisan agreement on fixing the age-out issue, but all immigration issues get stuck in a blender,” said Rand.

Pierce said the bill has an uphill battle in the Senate, and noted that Republicans are using the so-called crisis at U.S. borders — as thousands of migrants including unaccompanied children — to battle any immigration bill, saying it encourages more people to migrate to the U.S. The Associated Press reports that border encounters rose sharply during Donald Trump’s final months as president, from an unusually low 17,106 last April to 74,108 in December. Last month, encounters topped 100,000 for the first time since a four-month streak in 2019. House Minority Leader Kevin McCarthy, R-California, said during a visit to the border at El Paso, Texas March 15: “It’s more than a crisis. This is human heartbreak.”

The House voted largely along party lines, with 228 Democrats and nine Republicans supporting the bill.