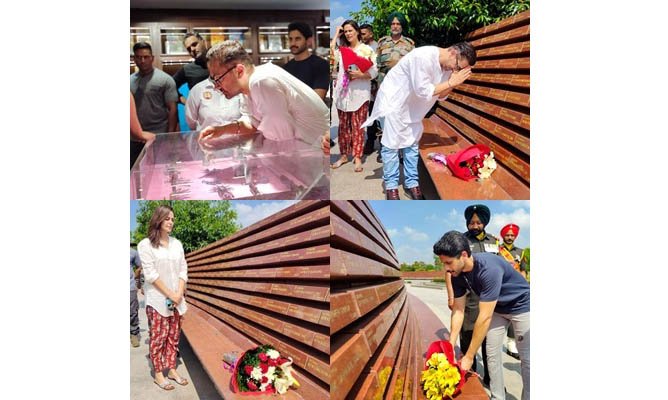 NEW DELHI, (IANS) – Even as the cinema trade awaits the clash of Aamir Khan’s ‘Laal Singh Chaddha’ and Akshay Kumar’s ‘Raksha Bandhan’ on August 11 with nervous anticipation, Aamir was in the capital with co-stars, Naga Chaitanya, and Mona Singh, visiting the National War Memorial.

Dressed in a white kurta and blue jeans, Aamir went around the museum and paid his tributes to the soldiers who have sacrificed their lives for their motherland.

In the film, both Aamir and Naga Chaitanya play soldiers who fight together in the Kargil War.

Sharing his feelings, Aamir said: “I am very nervous right now. It’s been 48 hours and I have not slept. I am not joking; I am not able to sleep. My brain is in overdrive, so I read books or play chess online. I will be able to sleep only after August 11.”

Revealing his innermost feelings, he said: “I will finally sleep only after August 11. I think Advait [Chandan, the director], and I will then sleep peacefully and when we wake up, the audience will tell us whether they liked the film or not. We will wake up and discover.”

And how does he intend to find out about how the audience feels: “I walk around in different theatres to watch the audience’s genuine reactions to the film. The audience doesn’t know that I am present in the hall. For the first week, I visit different cities and different halls to get the unfiltered reaction of the audience from the projection window or from the side doors,” Aamir said.

He added: “It depends on the theatre, where the hiding spot is better. Through this means, I get an unfiltered response from the audience. If the audience knows that I am present in the hall, then the reaction may be different, but I want to experience the natural response of the public.”

The cinema trade, which is agog with the news that the advance bookings of ‘Laal Singh Chaddha’ have been the second highest after the Ranveer Singh-starrer ’83’, is praying that the fate that befell the 1983 World Cup drama is not shared by Aamir’s dream project.