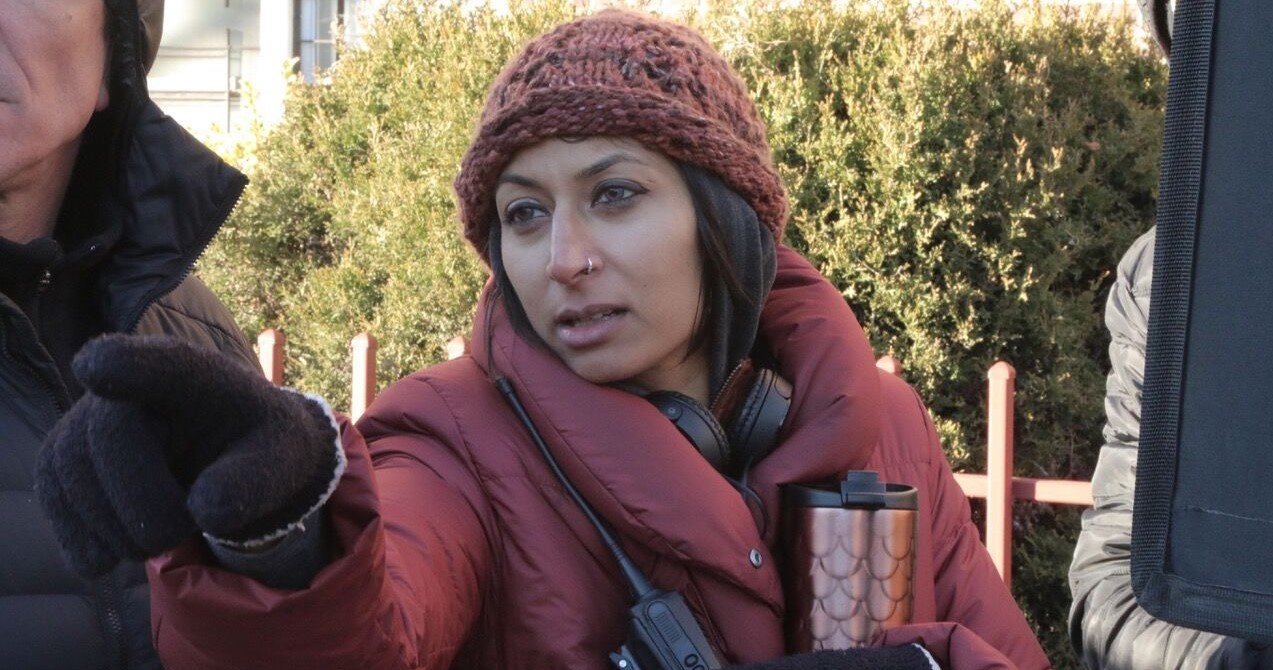 Pakistani American filmmaker/activist Iram Parveen Bilal’s third feature film, “I’ll Meet You There,” was one of ten films in narrative competition at South by Southwest 2020. The film, which is a family drama about a Muslim American cop and his teenage ballerina daughter, is being released Feb. 3 by Level Forward. “We have worked so hard on this film and whether you love it or you don’t, you won’t disagree with the amount of heart and soul behind it. I promise you,” Bilal told India-West. The film also stars Indian American actresses Nikita Tewani and Sheetal Sheth. (Luke Carr photo)

It is often said that a combination of passion, perseverance and resilience can help you get closer to your end goal. But when you get an up-close and personal look at filmmakers like Iram Parveen Bilal – who is a quintessential example of that adage – you get a life lesson of how to trudge through the trials.

The Pakistani American Physics Olympian-turned-filmmaker/activist is gearing up for the release of her new film, “I’ll Meet You There,” a portrait of three generations of a Muslim American family trying to connect with each other.

Level Forward, which has acquired North American theatrical rights for “I’ll Meet You There,” will roll out the film Feb. 3.

The film was one of ten chosen in narrative competition at SXSW 2020, piquing everyone’s interest. The selection generated plenty of buzz, but the spread of the coronavirus pandemic resulted in the festival’s cancellation, putting a damper on the team’s plans.

“This film is a culmination of ten years of fundraising and faith. We raised and lost part of the investment twice, we did a crowdfunding campaign the day after Trump’s #MuslimBan, which kickstarted the momentum again,” Bilal told India-West. “We had to make the film for half the amount we wanted to make it for and shot for just 19 days. We were 1 of 10 out of thousands of films in competition at SXSW only to have it cancelled in the wake of COVID-19. So, if anything, ‘I’ll Meet You There,’ in its making and its story, is about believing in yourself against all odds.”

“I’ll Meet You There” follows Majeed, a Chicago policeman, and his teenage daughter Dua (played by Indian American actress Nikita Tewani), a gifted ballerina, who are unexpectedly visited by Baba, Majeed’s long-estranged father from Pakistan.

Majeed is given a career-making opportunity that he can’t turn down, but it requires him to use his father’s religious devotion to gain access to the local mosque, while Dua, under Baba’s guidance, begins to question her passion for dance.

“The three form a tentative bond of family and cohesion that comes to a head in a surprise bait and switch by the FBI. It is an honest, nuanced feature film. Despite the specificity of its subject, this is a film that has rung true across cultures, faiths, and identities, because at its core, it is about staying true to oneself and still belonging,” Bilal told India-West.

The film just doesn’t integrate the urgent themes of race, religion, immigration, identity, dance, and surveillance into the story, it brings to life the nuanced complexity of relationships with the right amount of grit and heart.

After SXSW 2020 was cancelled, the filmmakers could opt to stream their projects on Amazon Prime for 10 days, but Bilal decided against it.

“Being available across North America for free for 10 days for a small compensation would have violated any further sales possibilities for the film,” Bilal told India-West. “At the end of the day, we as filmmakers have to balance access to audience with the interest of protecting and monetizing our films so we can do justice to our investors and ultimately get to make more films for our audiences.”

When asked what she hopes audiences take away from this film, Bilal, who initiated the Pakistani Oscar committee and is the founder of Pakistan’s first professional screenwriting lab, QALAMBAAZ, commented: “Firstly, that a Muslim American family is very much identical to their family and hence, create more empathy and sameness to reduce the negative stigma of the ‘otherness’ that socio-politics has created. Secondly, I’d love to provoke healing and empower anyone who feels they are a misfit in their family – where family can be defined by race, religion, culture, nation state, economic status, personal choices or whatever identifier one associates with. Lastly, I want them to learn to express their honest self and be able to reintegrate into a sense of family and society that nourishes them in their true self-expression.”

The film, said Bilal, who was raised in Nigeria and Pakistan, does draw some inferences from her own life – like her being a dancer – and other observations regarding her faith and how it is viewed.

“I’m Muslim, have faced the double standards against dance and music in our culture and society and also am troubled to know how my community has been misunderstood and demonized in America. So, in that sense, it certainly does draw from my life and experiences,” Bilal recalled to India-West.

Covid-19 has upended almost everyone’s plans, and lives, and has been hard on Bilal, too.

“2020 and this pandemic have made us all realize more than ever that we have to roll with the punches,” Bilal said. “It took me a while to lick my wounds but I’m happy to roar back on the scene with a partner better than I’d ever imagined. Level Forward is so thoughtful in their approach to cinema and their partnership is one I cherish not only for this film but for many more to come insha’Allah.”

Bilal shared that she is “excited” but also “anxious” for the release.

“We have worked so hard on this film and whether you love it or you don’t, you won’t disagree with the amount of heart and soul behind it. I promise you,” she told India-West.

Bilal was 1 of 15 directors invited to Cinefondation’s L’Atelier at Cannes 2019 for her feature project in development, “Wakhri,” which is set in Lahore. Her upcoming projects include two TV shows that have been created and optioned.

“Hoping to join TV in terms of directing and writing in 2021 and beyond,” said Bilal.

Following the screenings, several theme-based, live programs, presented by Level Forward and the Organization of Pakistani Entrepreneurs, will be held.