HomeIndiaIndia and the worldImran Khan Shot At, Protests Around Pak, Ex-Wife Thanks Man Who Foiled The Gun Attack

Imran Khan Shot At, Protests Around Pak, Ex-Wife Thanks Man Who Foiled The Gun Attack 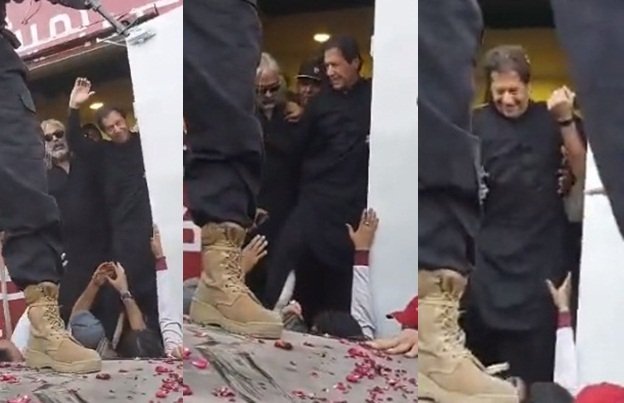 Imran Khan Shot At, Protests Around Pak, Ex-Wife Thanks Man Who Foiled The Gun Attack

LAHORE (IANS) – The attack on former Pakistan Prime Minister and Pakistan Tehreek-e-Insaf (PTI) Chairman Imran Khan in Wazirabad on November 3 was launched from three different directions in which at least three individuals were involved, the police said, according to a media report.
The police and eyewitnesses said that the bullets were fired from three different directions. One of the assailants, they said, fired on Khan’s container from the roof of a nearby workshop, Samaa TV reported.
Earlier, it had been claimed that there was only one attacker who was apprehended by a member of the crowd. He was identified as Naveed ‘Thua’ (Punjabi slang for scorpion), the report said.
He confessed to launching the attack unilaterally in a confessional video statement recorded and released by the police.
The police said that they had recovered a 9 mm handgun from the suspect along with four magazines. Another man has been arrested by the Punjab Police for the attack on the PTI chief.
Meanwhile, the Punjab police have said that they are searching for a third person with a search operation launched in the area using sniffer dogs, Samaa TV reported.
The police have sealed the area where the attack took place. They have also cordoned off the PTI container with forensic officials collecting evidence.
Pakistan Punjab Chief Minister Chaudhry Pervaiz Elahi has taken notice of leaking the suspected attacker’s confessional statement after the gun attack on Khan during the long march in Gujranwala, ARY News reported.
The Chief Minister said in a statement that all mobile phones of the police station’s staffers have been confiscated and they will be sent for forensic audit, the report said.
Khan and other PTI leaders were injured after a man opened fire near the PTI reception camp at Allahwala Chowk during the party’s long march. Khan sustained bullet injuries in his leg and is currently under treatment at the Shaukat Khanum Hospital in Lahore.  A party worker or official was killed in the attack while several others were injured.

His ex-wife, Jemima Goldsmith, took to social media to praise the young man who foiled the attack on the former Prime Minister during the party’s long march in Gujranwala. She said that Khan’s sons were thankful to the “heroic man” who dealt with the gunman and saved their father’s life, Geo News reported.
She even posted the picture of the young man, Ibtisam, who foiled the assassination attempt on the PTI Chairman. Ibtisam told the press that the gunman was not ready to shoot. He added that the pistol used by the attacker was automatic and continued to fire even after it was taken from him.