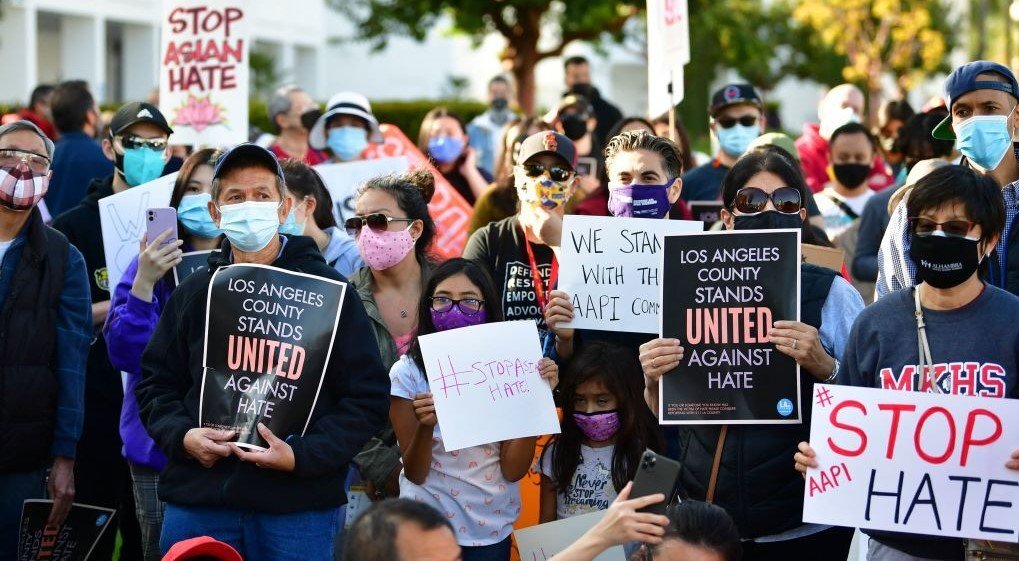 Social activists gather for a march from San Gabriel City Hall to Alhambra City Hall in California on March 26, 2021, during an anti-Asian American hate rally. “Too many Asian Americans have been walking up and down the streets and worrying, waking up each morning the past year feeling their safety and the safety of their loved ones are at stake,” said President Joe Biden March 19, following a meeting with AAPI leaders, adding: “We cannot be complicit. We have to speak out. We have to act.” (Frederic J. Brown/AFP via Getty Images)

“Too many Asian Americans have been walking up and down the streets and worrying, waking up each morning the past year feeling their safety and the safety of their loved ones are at stake,” said President Joe Biden March 19, following a meeting with AAPI leaders.

“They’ve been attacked, blamed, scapegoated, and harassed. They’ve been verbally assaulted, physically assaulted, killed. The conversation we had today with the AAPI leaders, and that we’re hearing all across the country, is that hate and violence often hide in plain sight. And it’s often met with silence. That’s been true throughout our history, but that has to change — because our silence is complicity. We cannot be complicit. We have to speak out. We have to act,” said the president.

When Long was arrested for the murders two hours after the attacks, the suspect told police that the shootings were not racially motivated. He has been charged with eight counts of murder, with the Justice Department facing increased pressure to add hate crime charges.

Captain Jay Baker, a spokesperson for the Cherokee Sheriff’s Office in Georgia, has been criticized for minimizing the murders in Acworth. Long “understood the gravity of his crime. And he was pretty much fed up, had been kind of at the end of his rope, and yesterday was a really bad day for him, and this is what he did,” he said.

A barrage of responses on social media characterized Baker’s statements as “sympathetic” to the suspect and “offering up excuses” for the fatal attacks.

The Georgia shootings come in the wake of a spate of anti-Asian American hate crimes across the nation. The web portal Stop AAPI Hate has recorded 3,795 hate incidents over the past year, including verbal harassment, shunning, and physical assault. Alarmingly, Asian American elders are largely the targets of physical assault. AAPI leaders attribute the rise in hate crimes to the rhetoric of former President Donald Trump, who called COVID the “Chinese virus,” the “Kung flu,” and similar racist verbiage.

The FBI will publish a new interactive hate crime page on its Crime Data Explorer website, which will spotlight reports of anti-Asian hate crimes. The FBI currently gathers data on hate crimes via its Uniform Crime Report. However, reporting by local law enforcement agencies is currently on a voluntary basis.

Former FBI agent Michael German, currently a fellow at the Brennan Center for Justice’s Liberty and National Security program, told reporters at a briefing last summer that about 12 percent of hate crimes are reported by local law enforcement agencies, because of push-back from local officials who don’t want the data reported.

“No mayor wants to be the state leader in hate crimes. So when your Police Commissioner comes to you and says: ‘Hey, look at these hate crimes we’re going to report,’ and you’re trying to get some multinational company to build a factory, you don’t want to be known as the hate crime capital of the world. So there’s a lot of good reasons why the police don’t report,” said German.

The National Science Foundation will fund 100 grants totaling $33 million for research attempting to understand, address, and end bias, discrimination and xenophobia, including against AAPI communities.

The COVID-19 Health Equity Task Force in the Department of Health and Human Services has established a subcommittee on “Structural Drivers of Health Inequity and Xenophobia.”

The initiatives also include funding for Asian American victims of domestic violence and sexual assault.

Separately, Biden and Attorney General Merrick Garland announced March 30 a 30-day expedited review by the Justice Department into how the agency can bolster its efforts to respond to hate crimes and hate incidents and improve data collection of such incidents.

Damon Hewitt, acting president and executive director of the Lawyers’ Committee for Civil Rights Under Law, said in a press statement: “These initial steps show that the administration takes seriously the spike in hate crimes directed at the Asian American and Pacific Islander community. We support the administration’s efforts and call for additional measures to address the intertwined hatred of racist, sexual, and gender-based violence.”

APIAVote said in a press statement: “We are encouraged by the White House’s announcement of the additional actions it will take to advance safety, inclusion, and belonging for all AAPI communities. This is a solid start to addressing our concerns and issues.”

The organization noted that 72 percent of the AAPI community feels there is bias against them. It urged the White House working with Congress to pass the COVID-19 Hate Crimes Act, introduced by Rep. Grace Meng, D-New York, and the Jabara-Heyer NO HATE Act sponsored by Rep Don Beyer, D-Virginia.