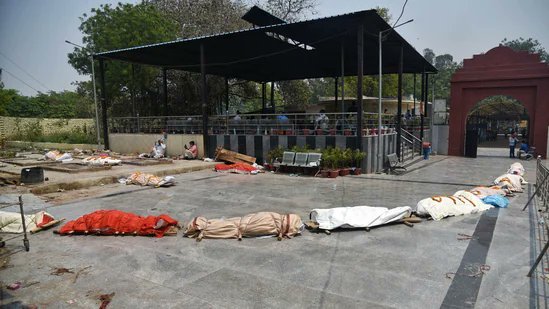 Mass cremations and despair had marked a troubled wave of the virus. (photo Twitter)

NEW YORK, NY (IANS) – The global Covid-19 death toll may be three times higher than what the official pandemic fatality records suggest, according to an analysis published in The Lancet.

According to official Covid death records, 5.9 million people died between Jan. 1, 2020, and Dec. 31, 2021. But the new study estimates 18.2 million excess deaths occurred over the same period, and India alone accounted for an estimated 22 per cent of the overall global fatalities.

Excess deaths, the difference between the number of recorded deaths from all causes and the number expected based on past trends, are a key measure of the true death toll of the pandemic.

The study, however, showed that 4.1 million excess deaths occurred in India till Dec. 31, 2021, and the country topped the list of about seven nations that accounted for more than half of global excess deaths caused by the pandemic over the 24-month period.

Because of its large population, India alone accounted for an estimated 22 per cent of the global total deaths, the findings showed.

With 5.3 million excess deaths, South Asia had the highest number of estimated excess deaths from Covid-19, followed by North Africa and the Middle East (1.7 million) and Eastern Europe (1.4 million).

These numbers suggest that the full impact of the pandemic may have been far greater, said researchers from the Institute for Health Metrics and Evaluation (IHME), an independent global health research centre at the University of Washington.

Calculating the difference between excess death estimates and official reported deaths provides a measure of under-counting of the pandemic’s true death toll, the researchers added.

“The large differences between excess deaths and official records may be a result of under-diagnosis due to lack of testing and issues with reporting death data,” the researchers wrote in the paper.

The new study provides the first peer-reviewed estimates of excess deaths due to the pandemic globally and for 191 countries and territories (and 252 subnational locations such as states and provinces) between Jan.1, 2020, and Dec. 31, 2021.

Weekly or monthly data on deaths from all causes in 2021, 2020, and up to 11 prior years was obtained for 74 countries and 266 states and provinces through searches of government websites, the World Mortality Database, Human Mortality Database, and European Statistical Office.

Distinguishing between deaths caused directly by Covid-19 and those that occurred as an indirect result of the pandemic (such as suicide or drug use due to behavioral changes or lack of access to healthcare) is crucial, the researchers noted.

“Understanding the true death toll from the pandemic is vital for effective public health decision-making. Studies from several countries including Sweden and the Netherlands, suggest Covid-19 was the direct cause of most excess deaths, but we currently don’t have enough evidence for most locations. Further research will help to reveal how many deaths were caused directly by Covid-19, and how many occurred as an indirect result of the pandemic,” said lead author Dr Haidong Wang, from the IHME.